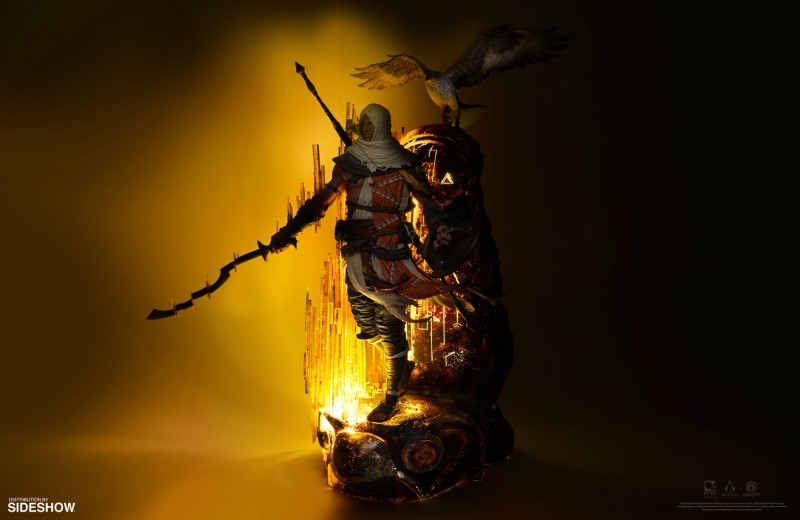 Many of you logged well over 100 hours into Assassin’s Creed Origins and got to know protagonist Bayek of Siwa quite well as he took on the Templars in Ptolemic-era Egypt. Sideshow Collectibles is bringing this popular lead back in a high-end statue limited to just 1,500 units.

This beautiful sculpt shows Bayek seconds after emerging from the Animus, his eagle ready to take to the skies to survey the land. A dramatic LED light display captures his synchronization and could make an excellent accent light for any game room. This polyresin statue stands at 27-inches and carries a weight of over 40 pounds.
Bayek is the latest “Animus” statue from Sideshow, joining Ezio and Altair. As beautiful as these statues are, they carry a hefty price. Bayek and Altair are just under $700, and Ezio is slightly more at $750. Altair and Bayek are available now at Sideshow and GameStop. Ezio will release between September and November of this year.

Assassin’s Creed is one of gaming’s most popular franchises. We don’t know what the next Assassin’s Creed game will be, but Ubisoft has announced the second year of content for the series’ latest entry, Assassin’s Creed Odyssey. A new expansion called The Siege of Paris is on the way sometime this summer, and an educational Discovery Tour is slated to release in the fall. Ubisoft has also said a new Assassin’s Creed game codenamed Infinity is in the early stages of development. Leaks suggest this project will be a live-service game that will grow over time.