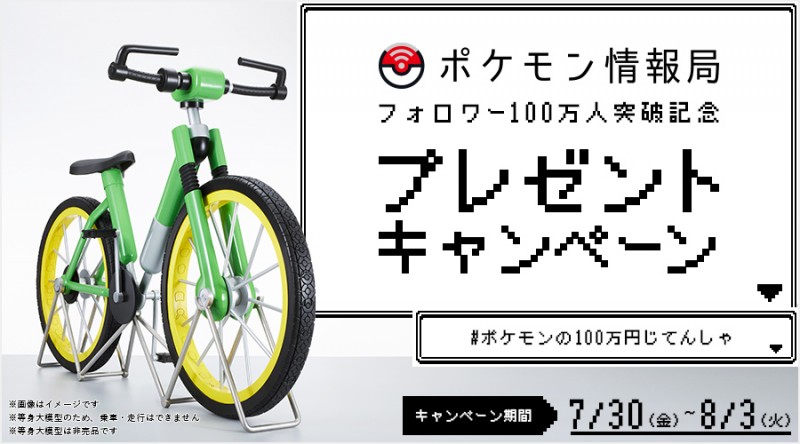 One of the best moments of Pokémon Red and Blue is finally obtaining the bicycle. Quickly speeding across the world you spent hours trudging across on foot feels liberating and you appreciate it as much as any of your pocket monsters. Well, what if I told you that The Pokémon Company is giving away a real-life version of that bike? That’s right it could be yours … as long as you live in Japan.

As spotted by Kotaku, The Pokémon Company is celebrating reaching one million Twitter followers by creating a replica of Generation 1’s bicycle. While garnering a million fans is a big deal, that number has dual significance. It directly references the in-game price tag of the bike, which fans likely remember stood at 1,000,000 Poké-monies (or whatever Pokémon currency is called). Since players’ wallets were capped at 999,999, it was literally impossible to purchase and could only be obtained by trading a bike voucher earned earlier in the game.

Before you get too excited about recreating your Kanto adventure in real life, you can’t actually ride this bike. You’ll notice it lacks a bike chain and is purely meant to be displayed. The bike also isn’t for sale and will be given away to one lucky fan that follows the @poke_times Twitter account and retweets ポケモンの100万円じてんしゃ which translates to “# Pokémon’s 1 million yen bicycle”. Anyone can enter but The Pokémon Company states that the bike will only be shipped domestically in Japan.

The giveaway begins today and runs until August 3. If you reside in Japan or at least have an address there the bike can be sent to, may the odds be ever in your favor. If you’re like those of us who are not in Japan, we’ll continue to jealously admire the craftsmanship and fun attention to detail in the photos.

For a Pokémon thing you can more easily access, check out our review of Pokémon Unite.

[Source: The Pokémon Company via Kotaku]

So, any of you living in Japan planning to enter the giveaway? Let us know in the comments!