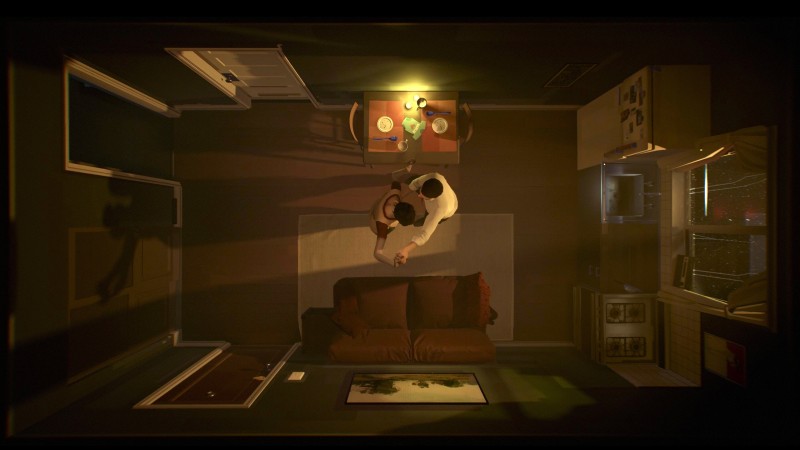 The last five minutes of your life have been great. Arriving home, your wife is in a fantastic mood. She asks you to dance around the living room. It’s silly, but you do. She’s made you your favorite dessert, too. As you sit down to eat, she reveals a gift. When you open it, you’re greeted with baby clothes. You’re going to be a father. And then there’s a knock on the door.

The next five minutes of your life are going to be hell. On the other side of the door is a man claiming to be a cop. He says he has a warrant. You let him in. He accuses your wife of murdering her own father eight years ago. For whatever reason, he’s insistent on finding a pocket watch that belonged to your wife’s father. Apprehending the both of you, tying your hands behind your back, the cop chokes you until you fall unconscious. When you wake up, you’re inside the doorway of your apartment, five minutes ago, as if nothing ever happened. What do you do next?

Your wife comes out of the bathroom. She’s made you dessert. She has a present for you. You tell her about the cop. You ask her why she killed her father. She is insulted and confused. What are you talking about? Five minutes later, the cop is back.

So goes the opening of 12 Minutes, developed by Luis Antonio, starring James McAvoy, Daisy Ridley, and Willem Dafoe. How you progress, largely, is up to experimentation. Playing the first 45 minutes or so, I tried my hand at whatever I could. I called 911. I hid my wife in the bathroom while I tried to stall the cop. In a moment of helplessness, I killed my wife, flushed the murder weapon, and hid in the closet, allowing the cop to stumble upon the body. At every turn, the game reacted to my decisions. Not that it ever did me much good. No matter what I tried, time always reset. I was never solving the puzzle, just finding more pieces.

“12 Minutes never tells you what to do,” Antonio says. “So, as things get more and more complex, it’s going to be a bit of your own interpretation of how things are going.”

12 Minutes takes place in one location: your apartment. During my time with the game, loops ran roughly five to seven minutes; five minutes before the cop shows up, a couple minutes after as everything falls apart. Each run gives you more knowledge of the situation, and no run felt like time wasted.

“The small space allows for very quick iteration where if you make a mistake or you want to try something, you have a very small [window],” Antonio says. “You have a very quick answer to your experiment; you’re not trying 50 things and then you fail at action 49. You do two actions; you know very quickly.”

My time playing 12 Minutes is short, but immediately interesting. Since completing the demo, I’ve been thinking about what I want to do differently when I play again. If the rest of 12 Minutes can deliver on the intrigue of its opening hour, it could be a unique take on the timeloop genre. Time will only tell.