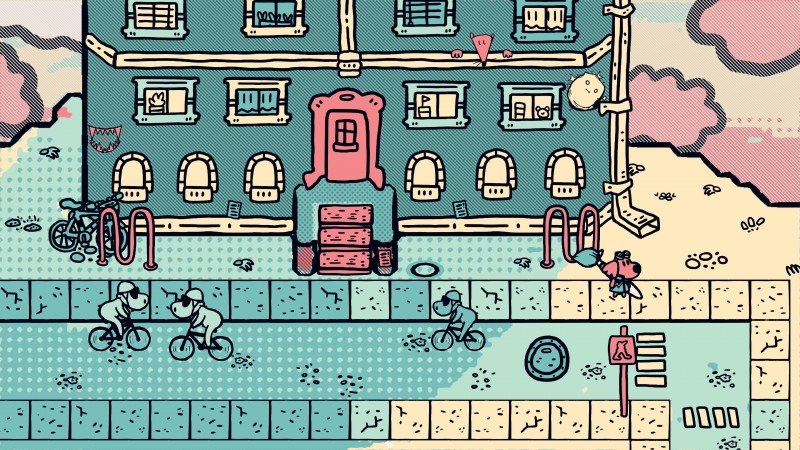 Rating: Everyone 10+
Reviewed on: PC
Also on:
PlayStation 5, PlayStation 4, Mac

I’m not the kind of person who enjoys spending time with a coloring book. I may have a few artistic bones in my body, but they’re probably broken in multiple places. So, when I first heard about Chicory I was skeptical, because not only does Chicory look like an animated coloring book, but its main mechanic centers on using a magic paintbrush to color a black and white world. However, within minutes, this inventive little gem won me over. Chicory might look like a coloring book, but, at heart, it’s a Zelda-inspired adventure full of humorous dialogue and weighty themes that left me a little glassy-eyed.

Chicory takes place in a charming little animal village called Picnic, where everyone is named after food. All seems well in the land of Picnic until a dark, malevolent force appears and all color suddenly disappears from the world. Unfortunately, Picnic’s Brush Wielder, the one responsible for keeping the place vibrant, has locked herself in a tower, leaving the world without a savior. That is until the Wielder’s janitor ­– a young, anthropomorphic puppy – “borrows” her master’s magic brush and sets off on an adventure to put the world back in order. This absurd premise develops into a compelling adventure thanks to Chicory’s clever dialogue and wealth of charming, idiosyncratic characters such as a junk-obsessed hoarder and a cat who can’t stop adopting new children. At specific points, Chicory’s story even touches on serious themes like imposter syndrome, and my little pup’s heartfelt adventure tugged on my heartstrings more than once.

As you journey across Picnic, you paint every object you see to give the world color. I had the easiest time using a PC mouse to control the brush, but a controller’s right analog stick gets the job done well enough. I also appreciated the number of painting tools at my disposal. Not only can you adjust your brush size and color, but you can hold down the paint button to quickly fill in the background and use pre-set brush styles to stamp shapes into the world. Most of the time you’re limited to using only three colors, which made me long for a larger color palette. Fortunately, you aren’t required to recolor the entire world if you don’t want to engage with this system. Even so, when I sat down to experiment with Chicory’s painting mechanics, I found it a very chill, Zen-like experience.

While recoloring the world is a consistent but enjoyable side activity, most of my time in Chicory was spent interacting with Picnic’s citizens and solving puzzles. From drawing a new logo for a pizza place to exploring an underground city full of bugs to repainting a house for an indecisive animal, I was constantly surprised by the depth of experiences Chicory squeezed from its painting mechanics. Most of Chicory’s puzzles ask you to paint certain objects to affect the world. For example, some plants explode when you paint them, so you can use these to destroy boulders that block your path. Along the way, you also gain a handful of clever new brush powers to navigate the world better. I particularly liked the ability to swim through my paint, which allowed me to squeeze through tiny spaces and reach out of the way areas.

Surprisingly, Chicory doesn’t have any combat mechanics, so while you explore, you won’t need to fend off armies of goons with your paintbrush. I appreciated this gameplay approach, and I didn’t miss the combat; Chicory’s world is so interesting to explore that I was halfway through the game before I even realized it lacked a combat mechanic. The one exception is Chicory’s boss encounters. During these events, you must dodge a series of attacks while using your brush to add color to the boss. I appreciate how these battles change up the pace, but it was hard to keep my eye on my brush and my character simultaneously; controlling both felt like trying to rub my tummy while patting my head. Fortunately, these encounters aren’t difficult, and if you die, you pick back up where you left off (you can even turn off the ability to die in the options menu).

I went into Chicory a bit dubious, but it surpassed my expectations with flying colors. The world and its inhabitants are a delight, its puzzles remain clever throughout the journey, and its main painting mechanic is the perfect stress releaser. Chicory taught me never to judge a coloring book by its cover, and that you don’t have to be a master painter to have fun with colors. 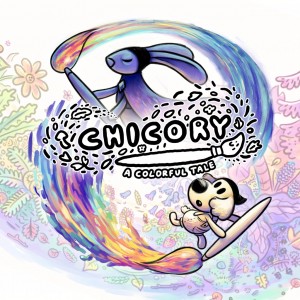 Summary: Chicory might look like a coloring book, but, at heart, it’s a Zelda-inspired adventure full of humorous dialogue.

Concept: The world’s color has vanished, leaving it up to you, as the Wielder of the Brush, to recolor the landscape and combat a looming darkness

Graphics: This simple line art looks like a coloring book come to life, but the color palette for your brush is limited

Playability: Using an analog stick to control your brush takes some getting used to, especially during boss fights

Entertainment: Chicory is an intriguing world full of hilarious characters and inventive game mechanics, which makes it a delight from start to finish