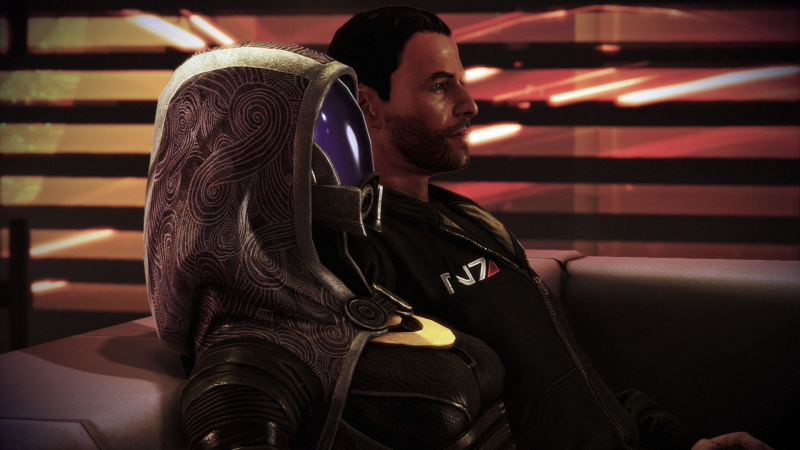 You’ve heard of the Garrus Vakarian body pillow; now it’s time for Tali’s time to shine. Just like BioWare has done in the past, they are giving fans of the space series a chance to canoodle with everyone’s favorite Quarian. Induction Port not included.

There are a million different reasons to love the Mass Effect trilogy, especially with the Legendary Edition now available, but one of them was the fact that the game offered friendships and relationships that were intimately crafted to bring the RPG aspect of the game to even more immersive heights. One of those romances is Tali Zorah. She can be your best friend, almost like a little sister, or your lovah! While we can’t have the real Tali quite yet (we can dream), but at least there are body pillows thanks to the BioWare Gear Store.

For those that may be unfamiliar, Quarians are a race of alien beings that are forced to wear bodysuits that are completely enclosed due to weakened immune systems following a war with the Geth. The Geth are a race of AI built by the Quarians, a race that was slaughtered when they started to show signs of true intelligence. The war chased the Quarians from their homeworld, forever changing their daily lives and forcing them to hide their true faces behind a helmet.

Fans meet Tali in Mass Effect 1, a confused younger Quarian just starting out her Pilgrimage away from the fleet. With important information regarding disgraced Spectre Saren, she soon finds herself in a fatal dilemma, one that Commander Shepard and co. can get her out of. She became an instant fan-favorite, later returning in Mass Effect 2 and 3. She can be romanceable by Male Shepard in both the later games or — if both she and Garrus are unromanced, the Quarian and the Turian have a cute relationship instead in the third game.

If you’re interested in catching some Z’s with the lovable Tali, you can purchase this cuddly Quarian for $35 right here.

Now that you can buy the Mass Effect Tali body pillow, we’ve got to ask: if you could turn any prank product into a real, purchasable item – what would it be, and why is it a Wrex body pillow? Sound off with your dream picks in the comment section below! For even more Mass Effect goodness, check out our exclusive hub here with interviews, coverage, and even some cool mods!