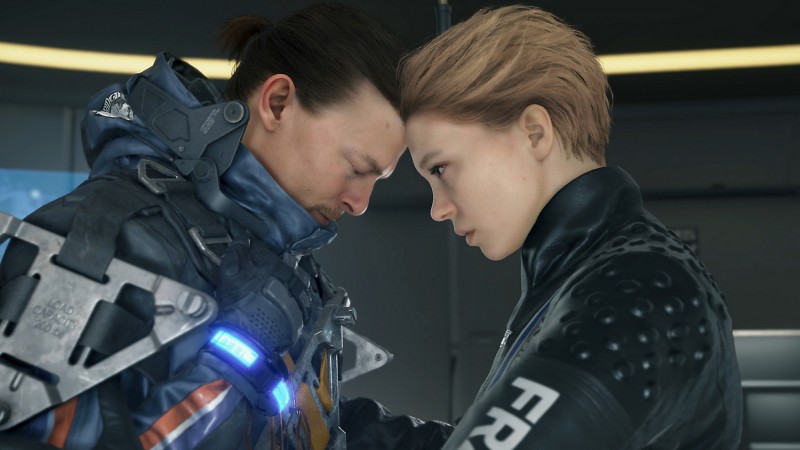 The Death Stranding Director’s Cut was first revealed during Geoff Keighley’s Summer Game Fest. The trailer that was shown gave not-so-subtle nods to Hideo Kojima’s classic Konami franchise, Metal Gear Solid. Death Stranding protagonist, Sam, infiltrates an underground M.U.L.E. base and almost decides to use a Fragile Express cardboard box to sneakily get around the compound; we all remember doing the same thing as Snake back in the day. Moreover, new information about the Director’s Cut rating, console availability, and mechanics (possibly inspired by Kojima’s work on espionage games) have come to light in a recent announcement.

Death Stranding Director’s Cut (PS5) has been rated by the ESRB: https://t.co/avozcRxk0i pic.twitter.com/NFvOwfwIJG

Much of the text released on the Director’s Cut ESRB page remains the same as the base version of the game. There’s still a Mature rating, but now we know that Sam’s journey across a desolate, haunted, and isolated America is coming exclusively to PlayStation 5. However, some new stealth mechanics are hinted at in an extra sentence, “…players can perform stealth takedowns of enemies (e.g., strangling characters from behind).” You can read the entire passage in Gematsu’s Twitter thread above.

While takedowns aren’t new to the Death Stranding gameplay loop, the mere inclusion of this might hint towards a newfound emphasis on tactical espionage engagements in the Director’s Cut. Of course, this brief announcement might explain why there were some serious Metal Gear Solid vibes in the Summer Game Fest reveal trailer too.

Matt Kato reviewed the version of Death Stranding that released in 2019, and like a lot of Kojima fans everywhere, he wasn’t impressed with the auteur’s newest title, “Try as it might, Death Stranding’s story doesn’t shore up its faults. It’s the normal Kojima mix of twists-and-turns, tropes, and overbearing themes, but at least I like that it explores real-world topics like the theory of multiple dimensions and key events in the history of the planet’s biodiversity. Like Sam himself, I often wasn’t sure why I kept going in Death Stranding. Maybe there was a little bit of pride in another task checked off the list, another job done. Unfortunately, this added up to little reward in the end.”

Kato’s points are definitely valid but I mainly agree with my good buddy, Blake Hester, who thinks that Death Stranding Is One Of The Best Games Of The Last Generation.