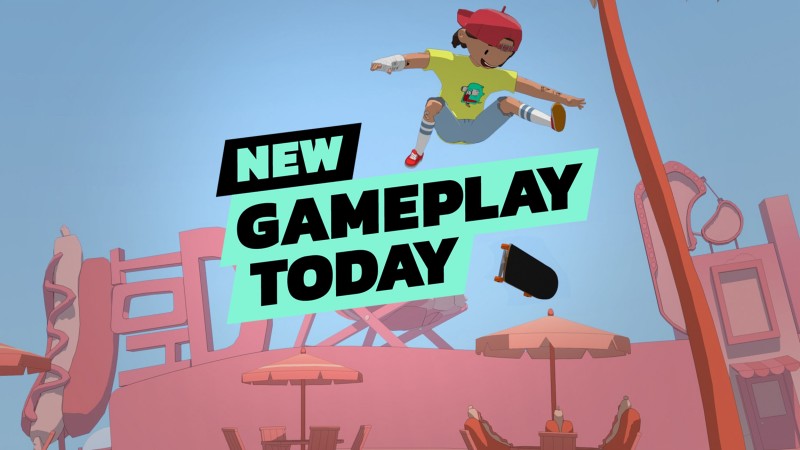 OlliOlli World is an upcoming vibrant skateboarding game that tasks players with landing tricks and combos as they skate through the colorful and weird Radlandia, a totally real place with totally real skateboarders. The OlliOlli series began in 2014 and quickly gained a following for its addictive one-life gameplay loop that had fans replaying levels over and over trying to land their next big trick. OlliOlli World plans to deliver the same beloved precision skateboarding experience but in a more expansive and brightly-colored package. Join Alex Van Aken and Blake Hester as they show off some of the game’s colorful courses in this episode of New Gameplay Today.

With last year’s release of Tony Hawk’s Pro Skater 1 + 2, my excitement to play extreme sports games is at an all-time high, and I’ve recently spent much of my free time playing titles such as Lonely Mountain Downhill and Trials Fusion. Though I haven’t played an OlliOlli game previously, I’ve also recently revisited classics like Skate 3 and even more recent indie skateboarding games like Skater XL. While those games have great style and are a joy to play, they haven’t captured my eye the same way that OlliOlli World does with its highly-saturated colors and characters. Also, what the hell is “Gnarvana” and why does this game have mystical skate gods? While I have no clue what the answers to those questions are, I can’t wait to play OlliOlli World when it releases later this Winter on Steam, PS4, PS5, Xbox One, Xbox Series X|S and Nintendo Switch.

Did you enjoy our quick look at this new OlliOlli game and want to see gameplay of other upcoming 2021 video game releases? Then be sure to subscribe to the Game Informer YouTube channel and catch up on recent episodes of New Gameplay Today right here. As always, be sure to leave a comment down below letting us know if you’re excited to check out this upcoming game.