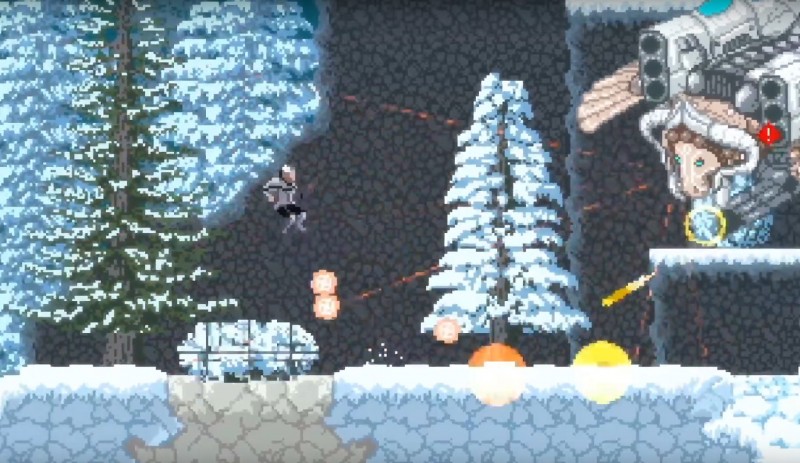 Axiom Verge 2 is coming to PlayStation 5 and PlayStation 4. Creator Thomas Happ confirmed the news Thursday with a post on the PlayStation Blog. Since the game’s announcement in December 2019 it has only been confirmed for Switch and PC as an Epic Store Exclusive.

The game was recently delayed from its vague launch in the first half of 2021 to Q3 2021, which would place the release date between July and September. In the blog post, Thomas doesn’t have a release date to share, only stating it’s arriving “later this summer.”

Whenever Axiom Verge 2 does release, Happ states that it will arrive on PS4 on the same day as Switch and PC. However, that guarantee may not extend to the PS5 version.

“I am going to try my best to get the PS5 version ready for launch, but that might take a bit longer since I really want to take advantage of that in-game hints system!” says Happ.

It’s worth noting that Happ is the sole developer on Axiom Verge 2, as he was with its predecessor. The sequel serves as both a follow-up and prequel but stars a new protagonist, Indra, a billionaire tech genus. While the first game was set on an alien planet, Axiom Verge 2 uses an alternate version of Earth as a backdrop. That doesn’t mean it won’t be just as weird as the original. Players have access to a brand new arsenal of alien weaponry not to mention a new mystery to uncover.

Gameplay retains its Super Metroid-inspired DNA, with labyrinthian level design and, of course, its 16-bit aesthetic. Happ shared additional gameplay details addressing the game’s difficulty. First, instead of choosing “Easy, Normal, Hard” at the start, players can instead adjust how much damage they deal to enemies, and in turn, how hard enemies can hit them. Furthermore, every boss in the game is optional. You’ll be rewarded for beating them, but none of the bosses serve as hard obstacles to the critical path.

Axiom Verge 2 sounds substantially bigger than the first game but Happ has repeatedly stated that it’s merely another slice of a grander mythos. He even name drops Axiom Verge 3 in the blog post, saying fans won’t know how the first two games relate until the third act. For a deeper dive into how Axiom Verge 2 plays, check out this April hands-on preview.

Are you excited to see Axiom Verge 2 come to PlayStation? What do you think about it’s approach to difficulty and bosses? Let us know in the comments!