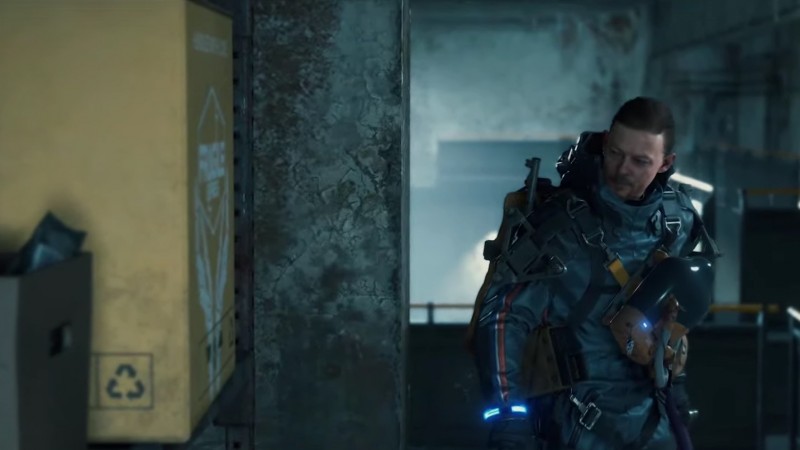 The trailer shows protagonist Sam Porter Bridges, played by The Walking Dead actor Norman Reedus, walking into an underground bunker patrolled by a number of armed guards. Sensing the path forward might be tricky, Bridges spies a cardboard box resting on a shelf beside him, which he then gets inside of. This is, obviously, an homage to Metal Gear Solid, where protagonist Snake would often disguise himself using a cardboard box to stealthily get past enemies.

In terms of what’s new in Death Stranding Director’s Cut, the presentation was light on details. However, according to Keighley, the full reveal is “just weeks away.” The footage only showed the PlayStation 5 logo.

On top of revealing Death Stranding Director’s Cut, Kojima also gave an extremely brief tease at his next project. Following the release of Death Stranding in 2018, Kojima says his creative process has changed – mainly in light of recent real-world events, such as the ongoing COVID-19 pandemic. “It’s almost similar to what happened after 9/11, considering which direction we should go as entertainment,” Kojima said in a pre-recorded video interview with Keighley. “I think that this is a big assignment for us [creators].”

Speaking about his new project, Kojima said he didn’t have much to share, but did say it would be different. “It won’t be one step at a time,” he said, adding that the next project would be a drastic change, while also retaining elements of actual society into the game to get players thinking.

“With this speed of change, I need to really consider which prediction I make and which ways I introduce ideas to the player,” Kojima said.

You can watch Keighley and Kojima’s entire conversation in the video below: