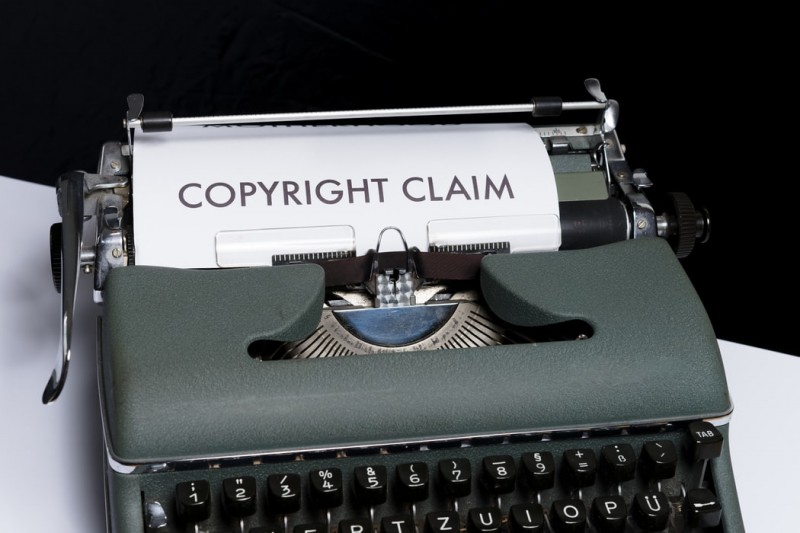 Not long after a horror movie creator brought forth evidence that Capcom stole his designs for Resident Evil Village (which is also referenced in the lawsuit detailed below), another artist is coming forward saying that the studio stole her properties for the Resident Evil and Devil May Cry franchises.

In a new lawsuit filed last week, artist Judy A. Juracek alleges that Capcom stole may of her copyrighted photos to use in both franchises, including environments and the Resident Evil 4 logo. The lawsuit has been filed citing stolen use of her copyrighted photography that can be seen in her book called Surfaces. In this book, Juracek shared over 1,000 photos of various textures. The purpose of Surfaces, released back in 1996, is to provide “visual research” for architectural designers for educational purposes. While designers can use images for her book, there is a process that requires anyone that uses her property to contact her before doing so. In her lawsuit, she states that Capcom never made contact with her regarding her photographs. 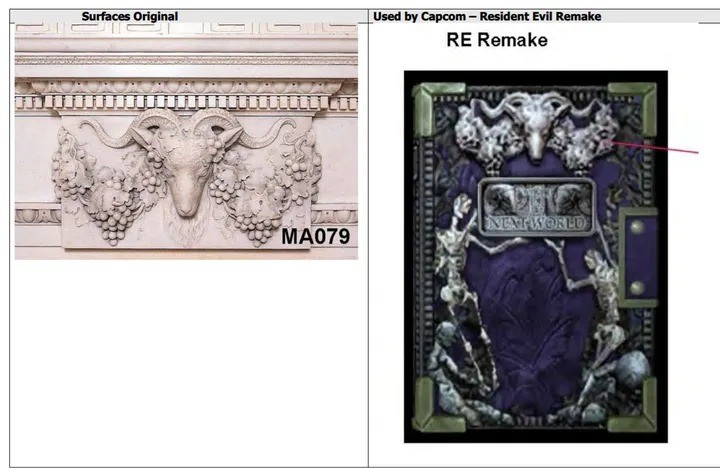 Via public court documentation, there are several images presented to show the references used from her book. The above image shows her photography on the left, with the Resident Evil Remake’s depiction on the right. She also provided a comparison for the logo used in Resident Evil 4, as well:

Surfaces were also used without her consent, as seen in the image below. She even draws comparisons where the exact pattern can be seen, showing that it wasn’t even cropped from her photography found within the book: 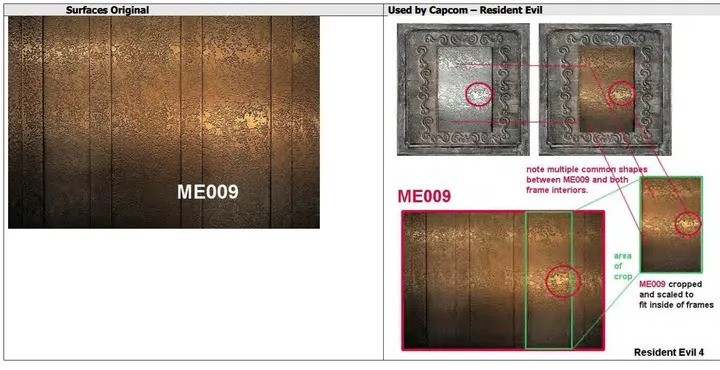 As noted by Polygon, the lawsuit also references a massive security breach that Capcom endured back in 2020 that included a ransom note threatening to expose stolen artwork and images. In her suit, Juracek says that Capcom didn’t even bother to change the file names from the ones she used with her images for the CD version of Surfaces, showing a direct reference to her photography used by the studio for some of its biggest gaming franchises.

Juracek and her legal team are seeking up to $12 million in reparative damages based on copyright infringement as well as a removal of copyright management that can cost the studio up to $25,000 per image stolen.

Capcom told the site that it is “aware” of the lawsuit, obviously, but that there is no comment to offer at this time. You can see the full court documentation here.

Thoughts on the lawsuit against Capcom for work seen in Juracek’s book Surfaces? Do you think it’s just a massive coincidence or does she have a case? Sound off with your thoughts in the comment section below.