Apple WWDC 2021 Everything Announced: All the Big Apple Software Updates

It must be developer season. Not too long ago, Google just held its I/O developer conference and now we’re getting a look at all the new software updates at Apple WWDC 2021. It was a long show with all new versions of iOS, iPadOS, watchOS, macOS, and plenty of improvements to Apple’s other products and services. In case you missed the one-hour, 45-minute showcase, here’s everything you need to know about Apple’s latest software updates.

iOS 15’s new Focus feature lets you set up different modes of availability while you’re working, on personal business, working out and other activities. Focus will essentially cut down the number of notifications you get and only shows the ones it thinks you need. It also reorganizes your home screen with the apps it thinks you’ll need. Your friends, family, and other contacts will see a do not disturb status under your name if anyone tries to text or call you.

Notifications have been redesigned with bigger icons while the new Notification Summary basically bundles together all your low-priority notifications (from store apps and social networks) while promoting news in a bigger preview.

The Photos, Apple Music, News, Safari, Podcasts, and Apple TV apps on your iPhone now feature a new "Shared with You" section to help find everything that’s been shared with you. In the Messages app, Apple Music playlists and Apple News stories are also getting a newly styled preview in Messages. 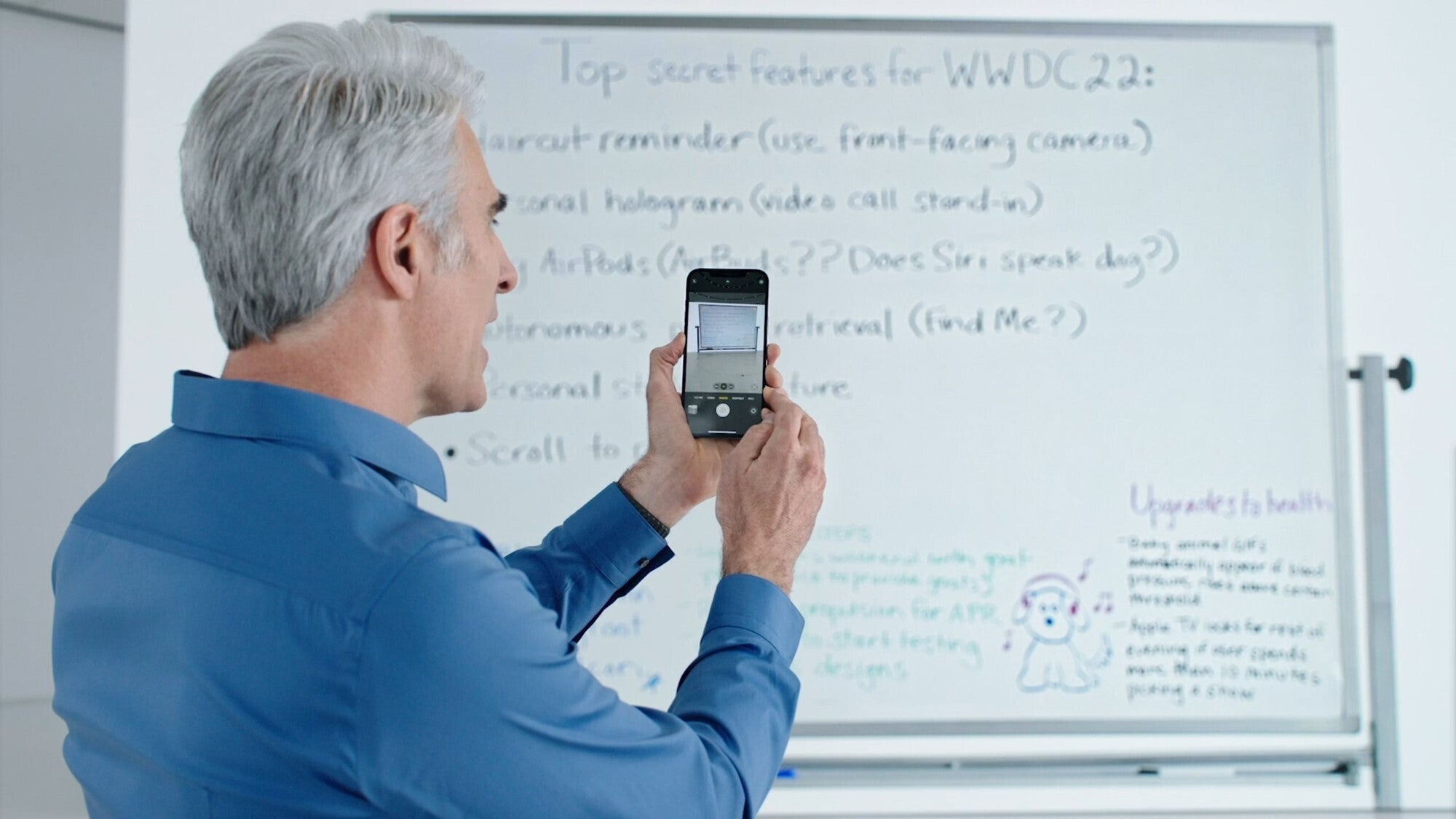 The iOS camera app is getting new OCR features called Live Text that allows you to point the camera at almost any text so you can select, copy, and paste it as digital text. What’s more, the camera will also be able to recognize objects and scenes. Apple Wallet will soon allow you to add a Digital ID that will even be recognized by the TSA. Additionally, Apple is working with hotels and lock companies to create digital key cards you can use to access hotel rooms and offices. 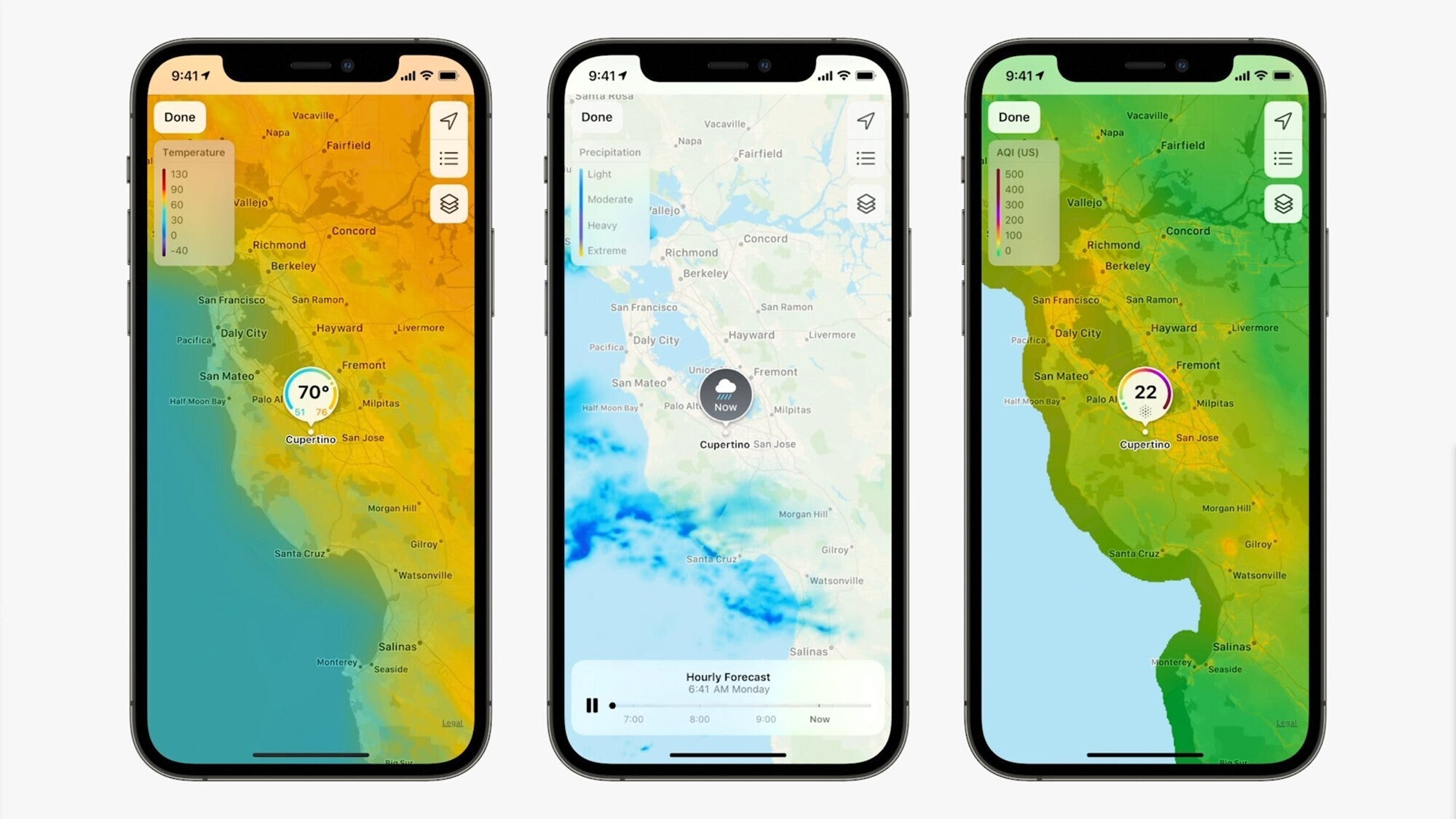 Weather is getting a visual overhaul that shows more current conditions and access to weather maps for air quality and precipitation.

Later this year, Apple will roll out new fancy Apple Maps of Spain, Portugal, Italy, and Australia featuring 3D modeled landmarks. For the rest of the world, Apple is working on adding more detail to its overall maps with elevation, commercial districts, buildings, and a new nighttime mode. While you’re driving, Apple also promises you’ll see more turn lanes, medians, and bus lanes on your map. 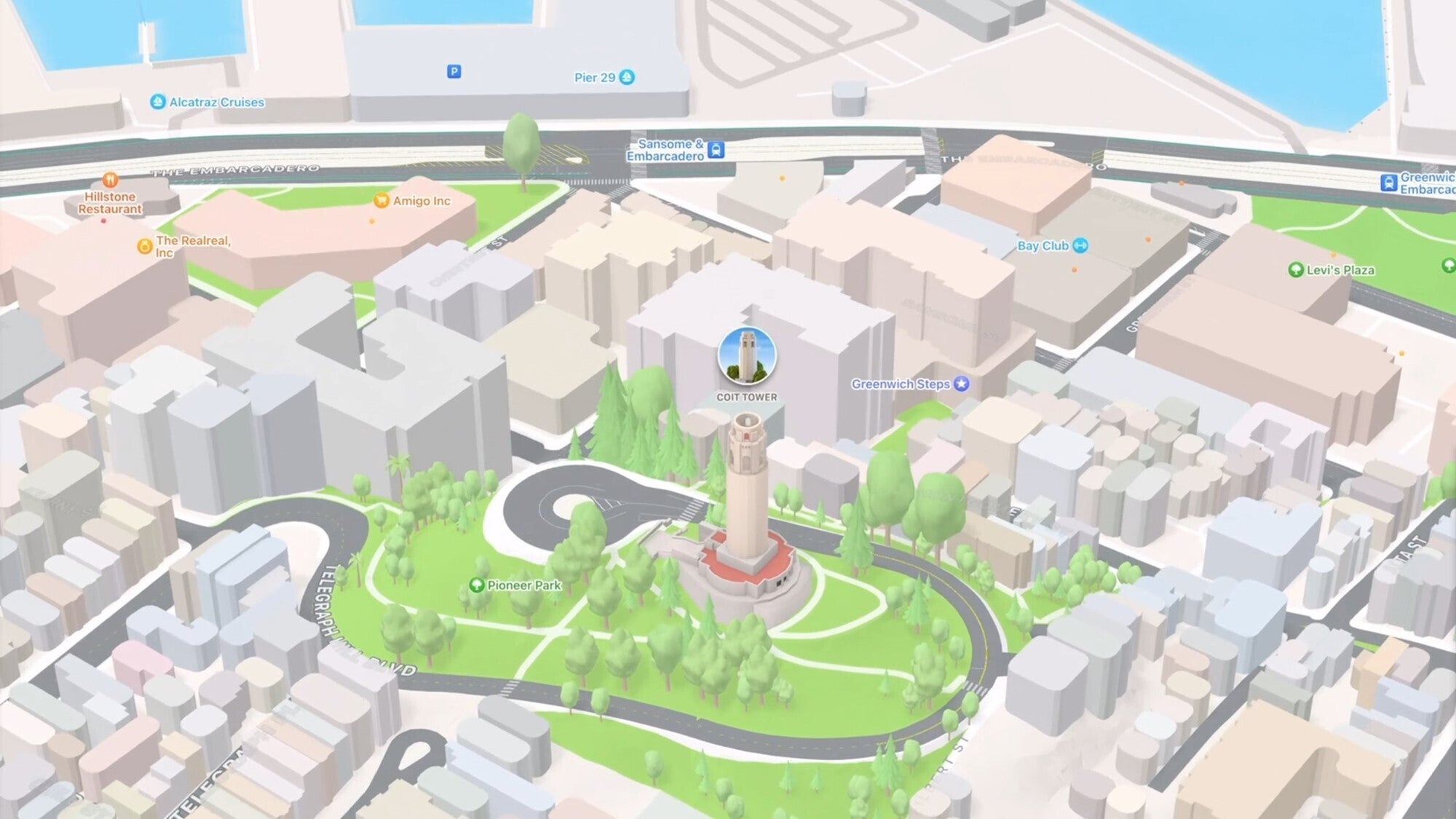 There’s also a new navigation mode that’ll give commuters a notification when their stop is coming up. You’ll also be able to look at buildings with the camera and get augmented reality directions overlaid (like big arrow signs and street names) on top of buildings. 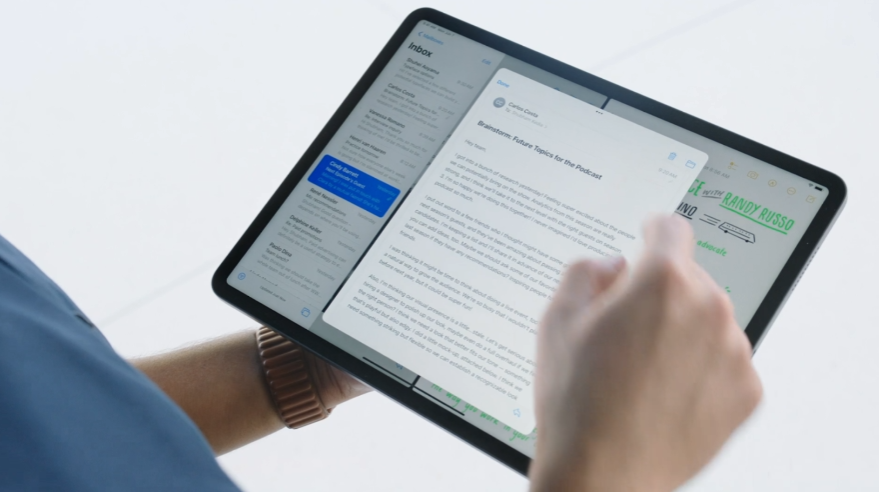 Improved multitasking is easily the biggest feature coming to iPadOS this year. Hitting the three-dotted UI element at the top of every app will bring up different windowing options. Once you hit the split view option, the app you’re looking at will slide over to let you select a second app from your home screen.

There’s also a new “shelf” (pour one out for the dock) that lets you look at all your open apps at a glance and drag them together to create a split view pairing. Apple has also created a whole new suite of keyboard shortcuts for all the windowing options. 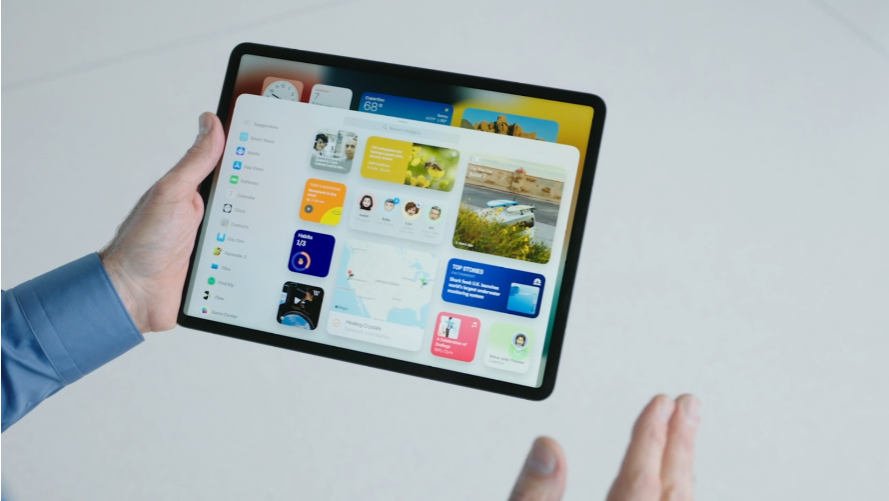 Movable widgets and the app library are finally coming to the iPad after iPhone users have been enjoying both features for a whole year now.

Those with an Apple Pencil will be able to swipe up from the bottom right to open a Quick Note and quickly write anything they need to jot down. Quick Note also works with apps like Safari in case you just want to quickly copy over or paste some text. Opening links from Quick Notes opens them in the background while keeping your virtual notepad on top. 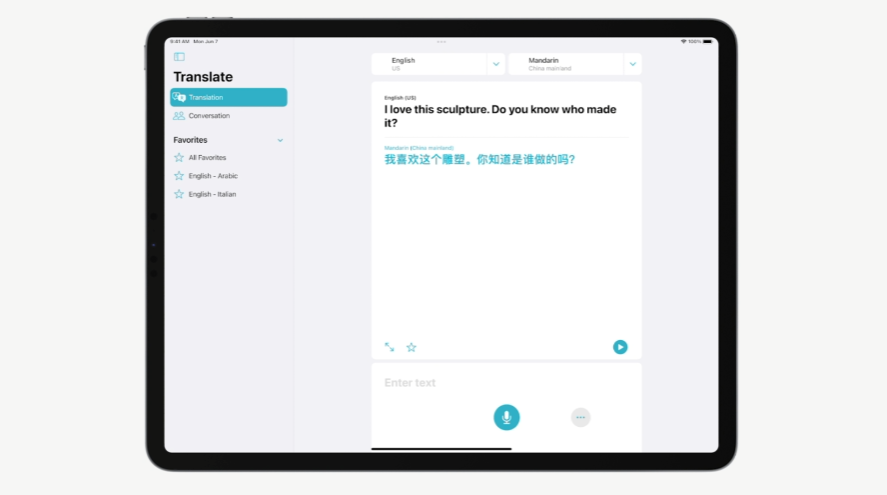 The Apple Translate app is coming to iPad with a new Auto Translate mode that detects who and what language they’re speaking without needing to hold down any buttons. 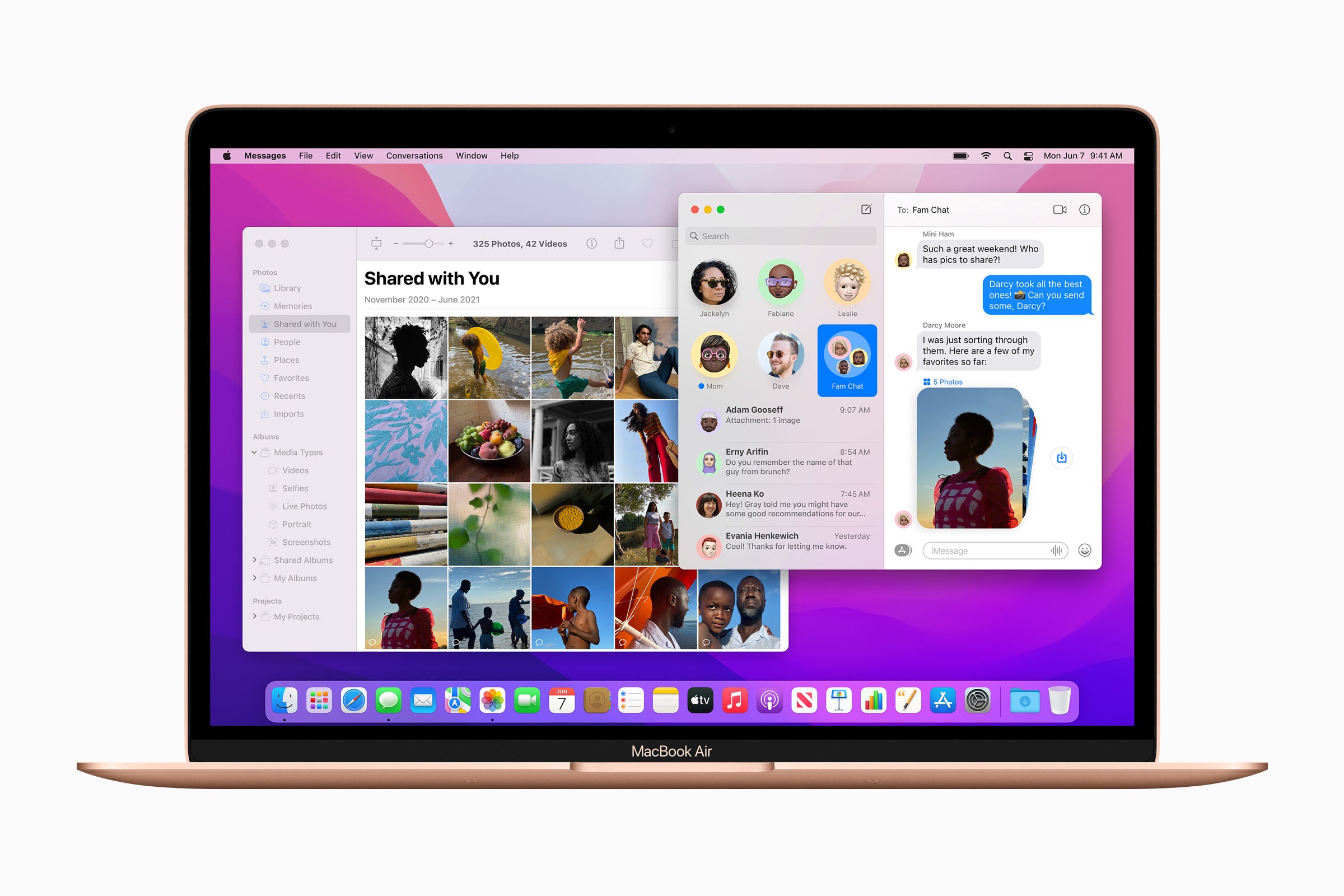 Safari has been given a major redesign that shifts the tab bar up right next to the top toolbar so you have more vertical space. Additionally, if you’re finding yourself with tabs that are just constantly open you can set up tab groups in a left side menu that live separately from the active tabs you have up top. 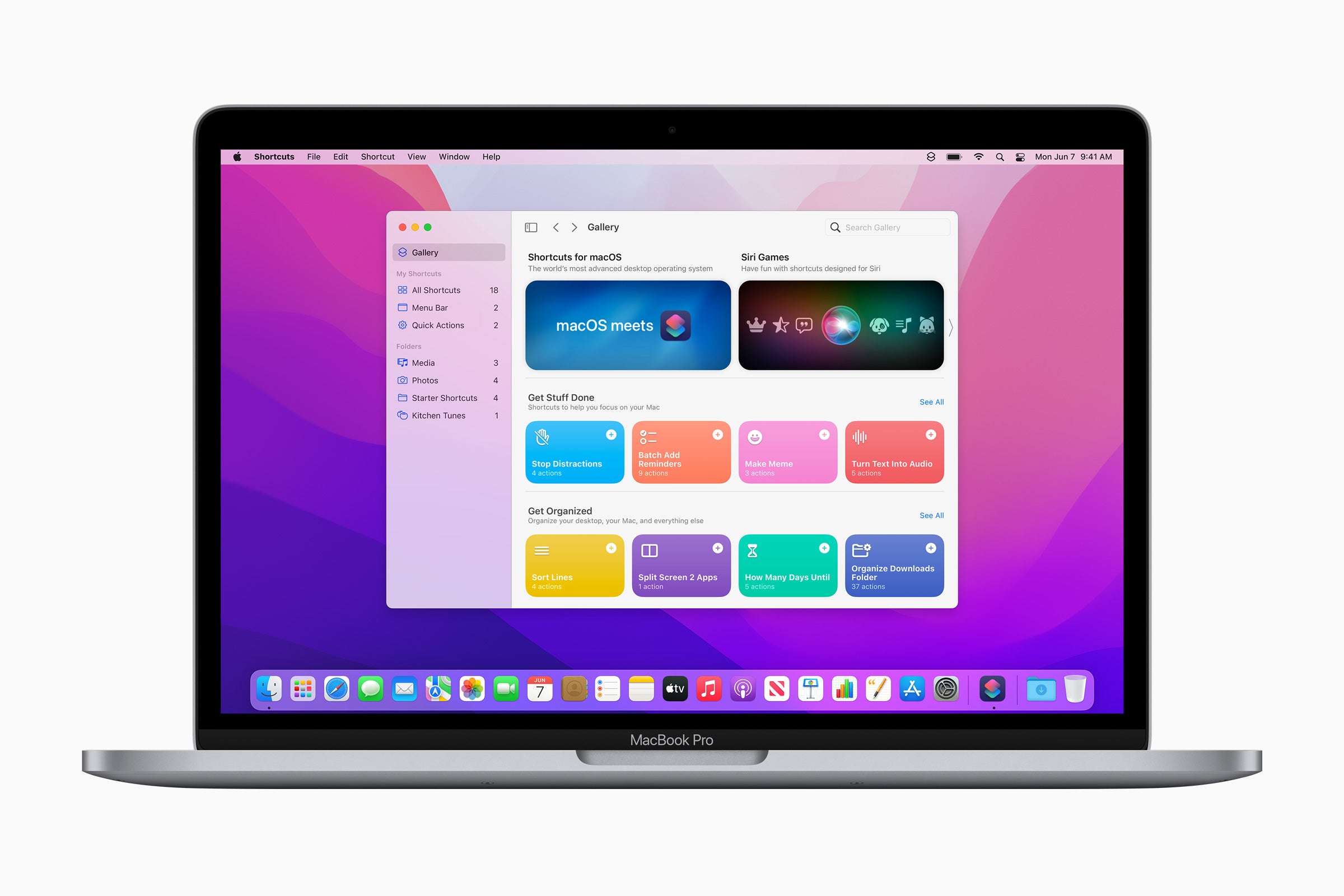 Shortcuts is essentially Automator given a splashy new interface and name. Basically, you can set up scripts to create GIFs, rename files, and any other menial computing task you want. What’s more, Shortcuts are being integrated directly into Finder, the menu bar, Spotlight, and Siri – there’s even a make GIF shortcut right in the Finder whenever you’re looking at a video.

Universal Control is an upgrade to Continuity that lets you use a single mouse to control both your Mac and iPad. All you have to do is position your two devices closely to each other.

AirPlay to Mac lets you, well, AirPlay to your Mac, it’s exactly as it sounds and you can drag and drop video and photos over. 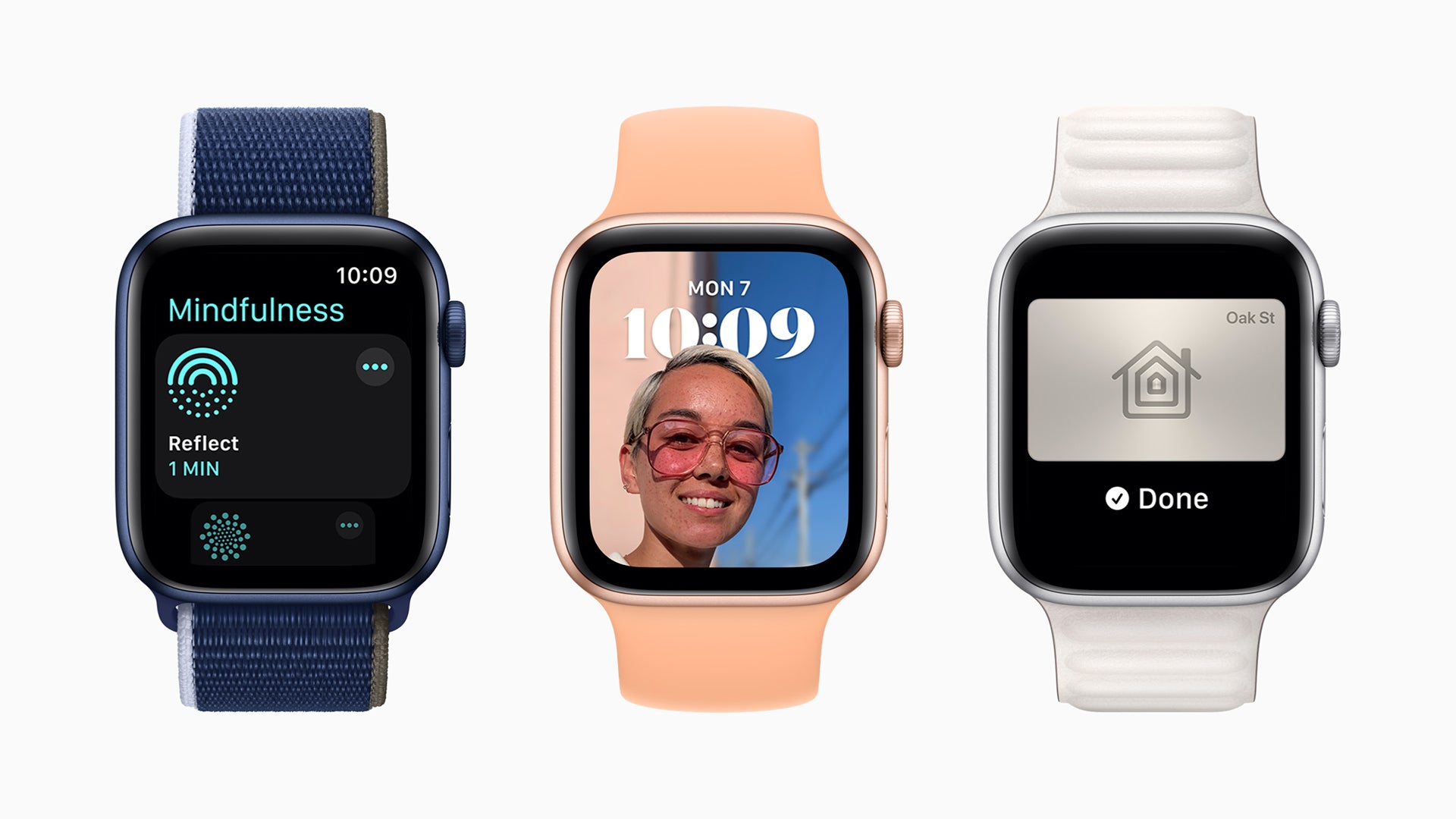 watchOS 8’s biggest update is going to allow you to reply to messages in new and better ways. First up, you can scribble characters onto your watch to input text. Users can also access the new photos app interface on their Apple Watch to send pictures through Mail and Messages right from their wrists. The newly added GIF support also allows users to send GIFs through Messages right from their wrists too.

The Breath app has a new interface along with a new Mindfulness app that’s designed to help you relax. The new Portrait watch face lets you use any photo taken with the iPhone’s portrait mode. This new watch face lets users choose what and how text is overlaid over or behind the image. 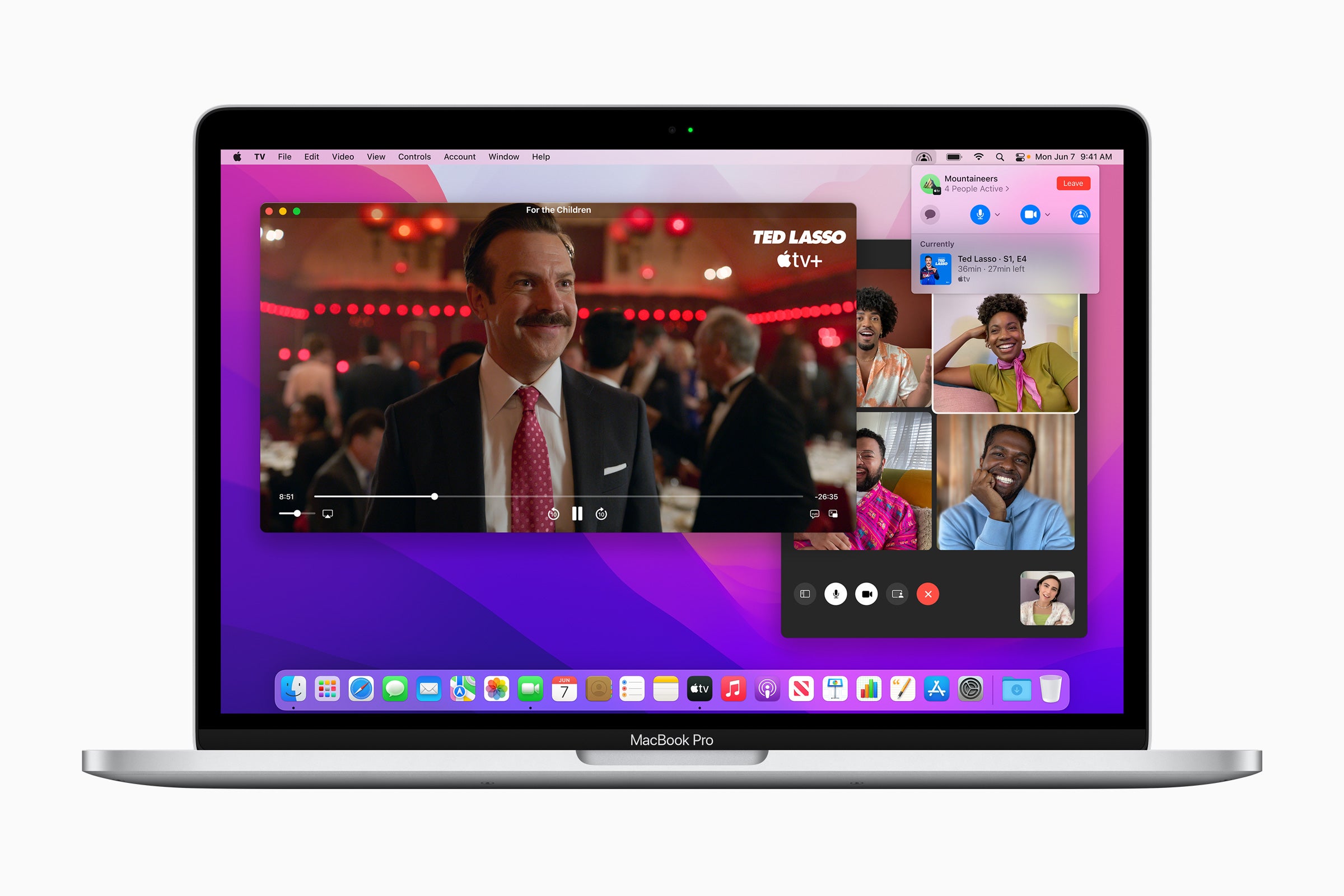 FaceTime is getting several big updates with spatial audio, grid view, plus the ability to share video and music over a call, and share FaceTime call links with Android and Windows users. Spatial Audio makes video calls more natural by making it sound like a person’s voice is coming from where their picture is on your screen.

The new Grid View makes calls with a large group of people more manageable too. Instead of having floating squares of varying sizes all over the place, you get a nice grid of consistently sized video frames.

Users can now blur out their background with Portrait mode. Better voice isolation is also coming to FaceTime so you can cut out more background noise too.

SharePlay will allow you to share Apple Music and video on a FaceTime call. Apple is also putting out an API so other developers can use this feature, so far Disney Plus, Hulu, HBO Max, NBA, Twitch, TikTok, ESPN+, Paramount+, and Pluto TV are listed as partners. Apple is also adding screen sharing while using FaceTime across all devices

Possibly the biggest FaceTime improvement is users will be able to share video call links with Android and Windows users, and even let users join over the web. 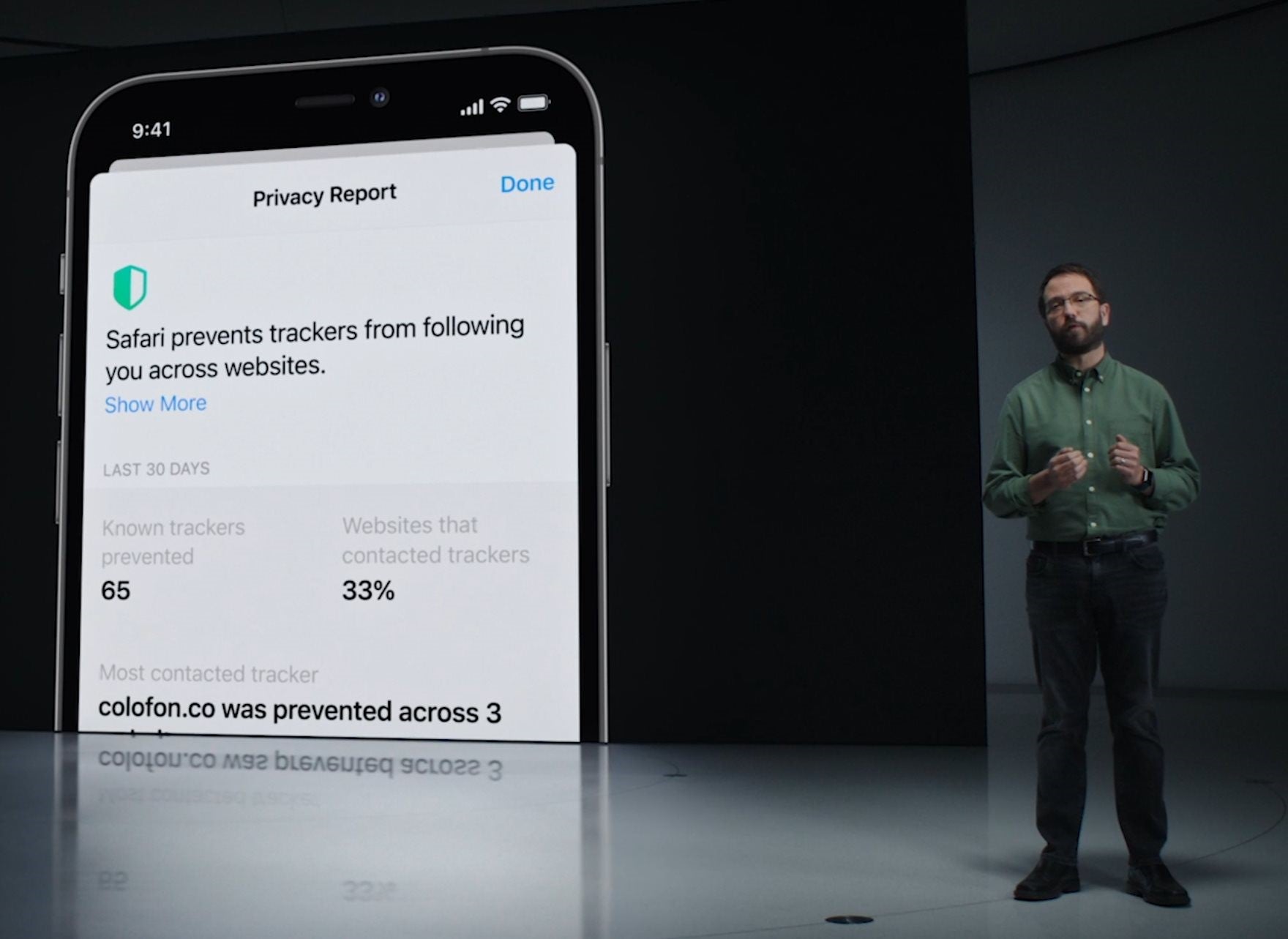 iCloud+ is like the iCloud you know and love with more features and at no extra cost (for now).

First up there’s Private Relay, which works like a VPN but isn’t entirely like one. It’s basically a service that aims to basically prevent anyone, including Apple, from seeing who you are and what sites you’re visiting.

Instead of creating fake emails to sign up for services you never want to get emails about, Hide My Email creates random email addresses for you. Lastly, you can use your iCloud+ storage to hold an unlimited amount of home security camera video.

Have a tip for us? Want to discuss a possible story? Please send an email to newstips@ign.com