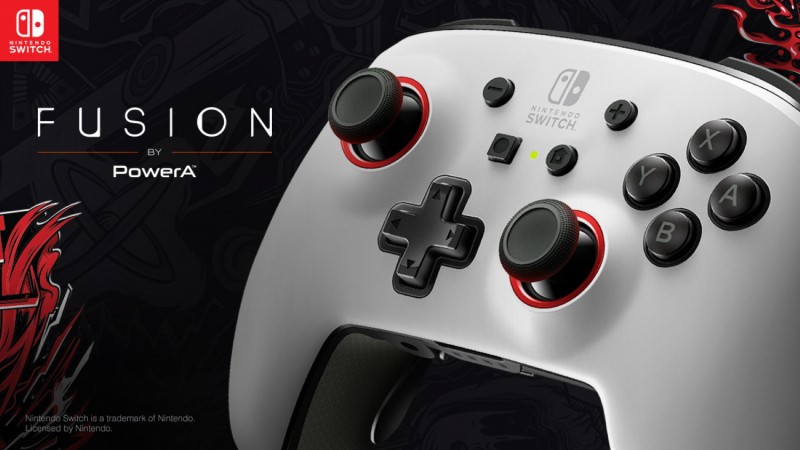 When the Nintendo Switch launched in 2017, players were given a choice of how they wanted to play with Nintendo’s fledgling hybrid system. However, those who wanted a better gamepad experience than the Joy-Cons could offer needed to pick up the official Switch Pro Controller, which better emulated the traditional offerings from consoles like the Xbox One. In the time since the system’s launch, we’ve seen a few companies attempt to deliver a competent third-party experience, but to this point, most (if not all) have fallen short of Nintendo’s first-party offering. One of those companies, PowerA, has pulled out all the stops, finally giving the first-party Switch Pro Controller a run for its money.

The PowerA Fusion Pro Enhanced Wireless Controller delivers most of the bells and whistles you’d want from a premium gamepad. This weighty controller sits nicely in your hands and features the standard button layout gamers have grown accustomed to with four primary face buttons, two shoulder buttons, two triggers, a d-pad, and offset analog sticks. Unlike the first-party Switch Pro controller, the PowerA Fusion Pro features a textured grip, making it more comfortable to hold in your hands. To top it off, the controller features Bluetooth 5.0 technology, a 10-foot cable if you prefer to plug in, and a 3.5mm audio jack for when you’re playing in wired mode.

Unfortunately, the Fusion Pro, like the Nintendo Switch Pro Controller, only supports digital triggers (not sensitive to varying degrees of pressure). In addition, the Fusion Pro does not support rumble in gameplay; if actually feeling the impact of the on-screen action in your hands is a big part of gaming for you, then perhaps this controller isn’t for you. However, the controller improves on several key areas that I didn’t miss the rumble as much as I thought I would going in.

The Fusion Pro also offers a ton of customization options. As with other modern premium controllers, you can swap out the analog sticks; if the standard-length, concave sticks aren’t to your liking, you can equip longer sticks or even a convex stick to ensure the best feel on your thumbs. My personal loadout is to have a short concave stick on the left, a long concave stick on the right, a white faceplate, and no back paddles (more on those later).

With third-party controller customization, the process can sometimes be a bit convoluted, requiring the use of special pack-in tools or even a screwdriver. The Fusion Pro lets you easily slide off the faceplate and then detach the stick you want to replace with limited fuss. Then, thanks to the fact that the sticks are attached under the faceplate, once you have the new face in place, the sticks are secure. I can’t tell you how many times I’ve knocked an analog stick off the Xbox Elite Series 2 controller since it just uses a strong magnet to keep the sticks in place, so I appreciate the security of the sticks on the Fusion Pro.

The Nintendo Switch Pro Controller offers terrific battery life with its built-in rechargeable pack, and the PowerA Fusion Pro is no different. Across several play sessions, I never even received a low-battery notification. After a couple weeks of use, I eventually plugged it in to allow it to charge before I woke up the next morning for another marathon gaming session. The company says a single charge can last 20 hours, and from my experience, that estimate might be a little on the low end. 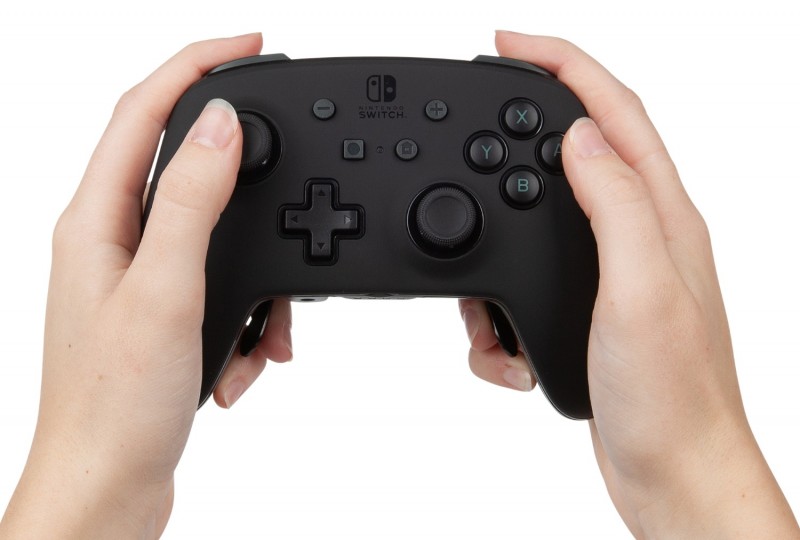 The Fusion Pro controller may look good sitting on your coffee table and feel good resting in your hands, but where the Fusion Pro really sets itself apart is in how it plays. Testing it out through a diverse list of Switch mainstays, I never had a bad experience. Whether I was taking down Calamity Ganon in The Legend of Zelda: Breath of the Wild or platforming through some of the more challenging sequences of Super Mario 3D World, I always felt in full control of my character.

One of the biggest problems with Nintendo’s Pro Controller is the mushy and imprecise d-pad. The d-pad on the first-party Switch Pro Controller is so bad that I avoid playing games like Tetris 99 with it. However, the Fusion Pro fixes this problem and then some. Putting the d-pad to the test, I replayed through the entirety of Super Mario Bros. and Super Mario Bros. 2 in the Switch’s classic games catalog. Using the PowerA controller, I was able to precisely platform through Mario’s most formative playgrounds, never feeling like the d-pad was to blame for any of my lost lives. Even if the other improvements over the Switch Pro Controller weren’t present, the Fusion Pro d-pad offers such an improvement, I’d still prefer it over the standard first-party offering. 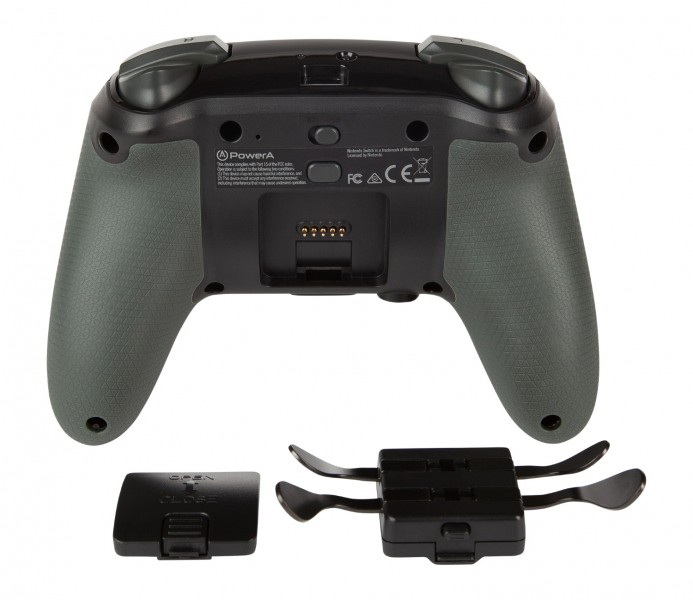 I was initially skeptical of the very concept of back paddles, but after playing Overwatch for hundreds of hours with the Xbox Elite Series 2 controller, it’s tough for me to play a competitive shooter without them. I fired up my favorite first-person shooter on Switch to test out the paddles Fusion Pro. The custom mapping process isn’t as intuitive as the Xbox Elite (which has its own native app), but it was far from painless; you just have to hold down a button on the back, press the face button you want to map, then press the paddle you want to map it to.

Unfortunately, I’m not a huge fan of the back paddles on the Fusion Pro. The paddles protrude just a touch more than those on the Xbox Elite Series 2, meaning I accidentally pressed them somewhat often. Even when I wasn’t accidentally triggering them, the way they sit in my hand wasn’t nearly as comfortable as I’d like. Thankfully, you can easily remove them from the controller with a press of a button, and replace the gap with a smooth cover to make it feel like a normal gamepad. Once I did that, the controller quickly became my favorite to use with the Switch. 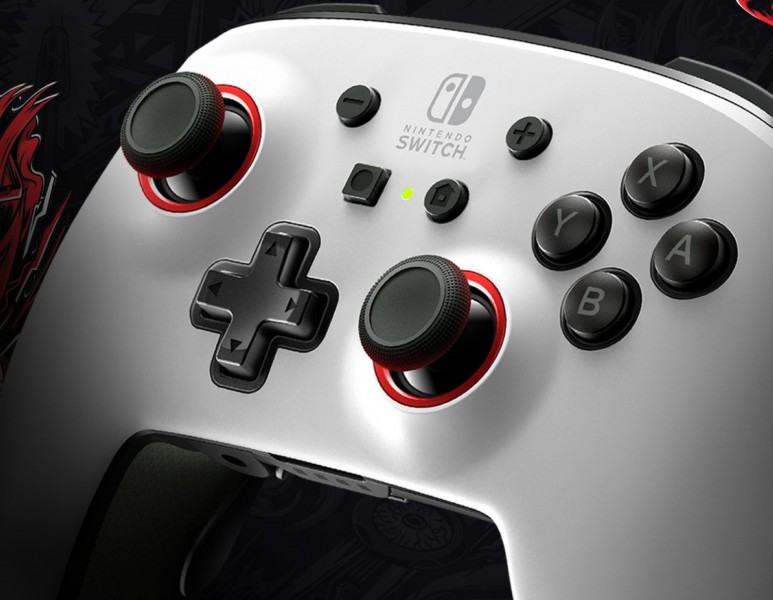