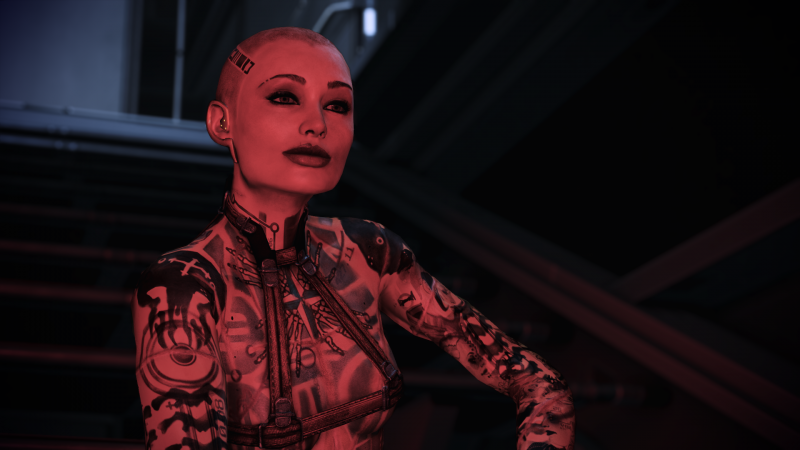 RPGs that allow romance as a feature give players that are interested in that kind of content another layer of immersion to enjoy. Skyrim does it. Dragon Age does it. Mass Effect does it. Mass Effect 1 didn’t do it well, but the team learned and evolved and eventually added more options in the subsequent two releases. That being said, more options were left on the cutting room floor, including Jack as a pansexual option, and modders for the original trilogy were quick to restore those scenes. While right now there is only one mod to restore same-sex romances, one for default male Shepard only, the community as a whole is hard at work on restoring what was cut.

Files were cut in the original games, eliminating voice lines that were recorded for same-sex romance options regarding characters like Kaidan, Jack, Jacob, Thane, and even Tali. While some of those dialogue options were recorded without the intention of being used, which is explained a little further down, others were cut due to social pressure to eliminate same-sex pairings. Most notoriously was the decision to cut Jack, a character that plainly states in her conversations with Shepard that she’s been with both men and women, due to criticisms from Fox News. Luckily, just like modders did for the original trilogy, the community is coming in to save the day by doing the same for the Mass Effect Legendary Edition.

Ryan Ainsworth, known as Audemus in the modding community, recently sat down with our friends over at TheGamer to talk about one of the many initiatives going forward with the remaster. Since the Mass Effect Legendary Edition uses an updated Wwise audio engine, it’s easier to mod in cut audio than it was for the initial trilogy, something that players have seen with some of the older same-sex mods. Because of that update, the modding community is finding it easier to restore those cut romances, including Kaidan and Ashley, which were limited to just the third game.

“I think the lack of LGBT representation in the Mass Effect trilogy is quite disappointing,” Ainsworth told the site. “Especially since, for example, you can’t get the full Paramour achievement in Legendary Edition if you play a strictly gay male Shepard. I know there are petitions to get BioWare to add in those romances for Mass Effect 2 and Kaidan’s gay romance in [the first] Mass Effect, and while it’s a shame that it doesn’t look like that’s going to end up happening, I can say that with our improved Mass Effect 2 audio modding potential, plus the fact that all of the unused same-sex romance voiceover is still present in Legendary Edition’s files, these mods are not just on the table – they’re pretty much certain to be made.”

He added, “So PC Gaymers can rejoice (that was a terrible joke, don’t print that, lmao). Off the top of my head, these would be for Kaidan, Ashley, Jacob, Jack, Miranda, Thane, and Tali. For some of them, there isn’t enough in the files to fully restore, but we can be very clever with reusing/splicing existing lines to fill in the blanks.”

If you remember from our coverage back in February, we confirmed that though there were cut romance options for same-sex pairings, including Jack due to Fox News pressure, Kaidan was reportedly never intended to be an option for Male Shepard in the first game. Mac Walters, the game’s director, told Game Informer that though the character was later added as a male romance option in the third game, the audio found for his character in Mass Effect 1 was not indicative of cut content. Not like Jack.

When I asked whether or not Kaidan’s romance was cut for Male Shepard in the first game, and if so, would it be restored in the remaster, Walters responded with a quick and resounding “no.” He elaborated, telling me, “So, this is an interesting one. What had happened in the original first game – actually in all of them – is when we would record the male and female Shepard lines, you actually had to go in and manually flag every single line that shouldn’t or should be recorded for either gender at the time. The process for that, as you can imagine – as our tools had just been created on Mass Effect 1 – relied on every human to go in and actually select every single line. What you’d find is that there, it’s not just the lines, there are other lines that got recorded that shouldn’t have been recorded because they weren’t checked, so they’d just get printed off as a script, they’d go to the studio, the actors would record them, they’d come back to the game, and that’s what shipped.”

He added that the team did try to capture as many of those instances where something wasn’t checked as they could, and eventually, the toolset was improved upon to lessen human error, but in the first game, it was still all very new, and Kaidan’s lines slipped through the cracks. Because of that, Walters added that Kaidan will still only be romanceable by Male Shepard in the third game because “it wasn’t intentional in the original,” and the team has already told us that they wanted to keep the remaster as true to the source material as possible beyond generalized improvements.

Remember: romance in these games is optional, romancing the same gender even more so. If you don’t like it, it is possible simply to ignore it, but having the option there to enjoy or to ignore means a lot to a very large portion of the Mass Effect fanbase. In a game that is about your experiences, there is nothing wrong with wanting those experiences to marry with real-life preferences.

If you’re interested in the same-sex mod that is available now for default Male Shepard, you can find that on Nexus right here. Be sure to also check out our game hub to learn more about the Mass Effect Legendary Edition, including exclusive interviews, deep dives, tips, and so much more.