Biomutant Review – The Short Branch Of The Evolutionary Tree

Rating: Teen
Reviewed on: PlayStation 4
Also on:
Xbox One, PC

Much like its gene-spliced protagonist, Biomutant is a hodgepodge of ideas stitched together to form what is ultimately a mixed bag. The game blends elements of open-world design with stylish action, gunplay, crafting, a morality system, and more. Like many jacks-of-all-trades it winds up being a master of none, and a thick layer of technical jank on top of half-baked ideas makes Biomutant feel like a case of feature creep that needed to be scaled back.

At its core, Biomutant is a typical open-world game featuring a large map littered with basic objectives, points of interests, and various environmental biomes with bizarre wildlife roaming in between. Despite its post-apocalyptic premise, the vibrant overworld is packed with color, and I love how that beauty is juxtaposed with ruins of modern civilization. A majestic Tree of Life sits at the world’s center and its four gigantic roots snake for miles overhead for a wondrous sight. The anthropomorphic character and monster designs are a charming blend of strange, funny and, sometimes, unsettling. 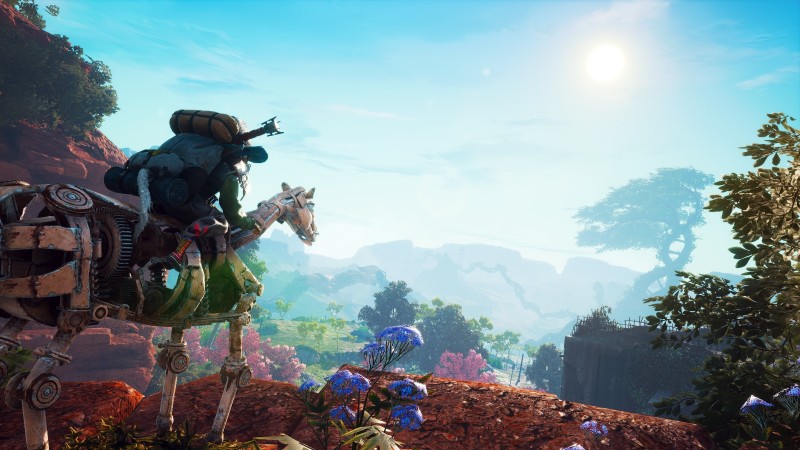 I enjoyed Biomutant most when I simply explored, stumbling upon hidden bunkers or abandoned villages and clearing them of their precious loot. Traveling gets even better thanks to a variety of transportation options, from riding various mounts to stomping around in a mech suit to soaring on a glider. Summoning a mech from the sky feels empowering until you realize some vehicles can only be used in vaguely designated zones. Being barred from summoning my boat in one clear body of water but not another puts a damper on the game’s sense of freedom.

Combat blends stylish melee with wacky gunplay but lacks the polish it needs, often feeling messy and imprecise. Parrying feels especially unsatisfying, and the loose lock-on system makes staying on target a finnicky pain. I appreciated the variety of special powers at my disposal such as creating trails of fire or conjuring ice storms. These abilities add a flashy wrinkle to the action, but they also don’t pack as much punch as I wanted in battle, even after investing stat points into them.

Biomutant’s combat became more tolerable once I acquired stronger weapons via a robust and rewarding crafting system. After collecting random junk like old sniper scopes, trumpet horns, or even bananas, you can slap together devastating killing machines. I had a great time maximizing this system, and seeing my creations tear through monsters always felt rewarding. The same goofy satisfaction applies to armor and gear; my character rocked a mascot helmet and a polo shirt that looked ridiculous, but the outfit was augmented to be as sturdy as a suit of armor. The drive to make cooler weapons is potent and scavenging for new parts consistently felt worthwhile even when I found loot that was inferior to what I already had. That’s because you can always sell it or, better yet, break it down into valuable ingredients to craft better parts.

Biomutant boasts an overwhelming amount of side activities that are mediocre best but too many of them boil down to completing simple actions a set number of times in different locations. The tasks themselves aren’t bad, they’re just the definition of busy work, and the rewards aren’t worth the effort half the time. Still, you don’t need to worry about a lack of content in Biomutant; my quest log overflowed with things to keep me busy for dozens of hours, even if those activities were largely shallow.

While elements around the edges can allow some degree of entertainment, it all feels hollow when it’s funneled into an underwhelming narrative core. Upon bringing your furry hero to life, you’re saddled with several big tasks. Four destructive World Eaters are killing the Tree of Life, and it’s up to you to stop them. You also need to bring an end to a tribe war by joining one faction and then uniting or eradicating the rest. On top of that, the brute who murdered your family in childhood has resurfaced and must be dealt with. Did I mention there’s also a life-saving Ark that holds a limited number of seats and you must determine which of your allies gets a free ride should the world go sideways?

Biomutant juggles a lot of threads but none of them are engaging. Avenging your parents’ death lacks any emotional punch because the killer is barely a factor in the story, and the final showdown unfolds in predictable, anticlimactic fashion. Solving the tribe war simply involves conquering the other settlements in bland confrontations and deciding whether to kill or spare the leaders. World Eater missions have the most meat on their bones by far, with various tasks, such as obtaining vehicles, aimed to prepare you for the big fights. However, facing these beasts consists of sloppily designed boss fights that rob these titanic battles of any sense of awe. The Ark subplot feels entirely unnecessary and doesn’t even make total sense if you manage to save everything anyway. The lackluster storytelling further diminishes an already shallow morality system, which yo-yos between basic black and white choices.

Throughout your journey a pleasant British narrator recites the entire adventure. He does an adequate job, but his rampant interjections outside of cutscenes wore on me after a while. The narrator also speaks for every character, which robs them of any individuality, and conversations become tedious since you have to wait for the narrator to translate the native creatures’ gibberish. The only other voices you hear are your two bickering fairies, which represent your light and dark side, and they became my favorite personalities by default for having, well, personality. I like that they’re both jerks constantly belittling each other while rallying you to join their side.

A lackluster presentation and technical issues further spoil the experience. Cutscenes are rough thanks to stilted animations and an overall flat delivery. An occasionally wonky camera can zoom inside of objects during conversations. Cinematics sometimes end abruptly, even cutting off dialogue in progress. Playing on PC offers a smoother outing, but various bugs and hard crashes hindered my adventure on console.

Biomutant consistently shows glimmers of promise but it takes patience and a pair of rose-colored glasses to see them. I genuinely loathed my first several hours with the game, but once I made cooler weapons that made combat more tolerable or admired another postcard-worthy sight, I felt more disappointed than anything. Biomutant has all the ingredients of a unique, entertaining adventure. It just spends too much time doing everything possible to try and impress its audience instead of polishing its handful of strengths. 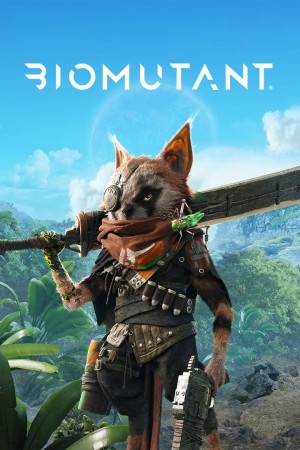 Summary: Despite bursting at the seams with cool ideas, Biomutant is a largely hollow experience that only provides fleeting glimpses of greatness.

Concept: Splice together a hero, save a dying world, avenge your parents’ murder, and end a war in this wildly ambitious open-world title

Graphics: Biomutant’s wonderfully quirky art and creature design makes for bizarre eye-candy but rough animations and an overall lackluster presentation begs for another coat of polish

Sound: The handful of forgettable tracks plus the overwhelming presence of a tiresome narrator makes Biomutant unremarkable to the ears

Playability: Combat feels messier than it looks thanks to rough polish and troublesome targeting but becomes bearable once you craft more powerful and exciting weaponry

Entertainment: Biomutant has fun moments, but it stumbles in too many significant ways to make it a wholly satisfying experience