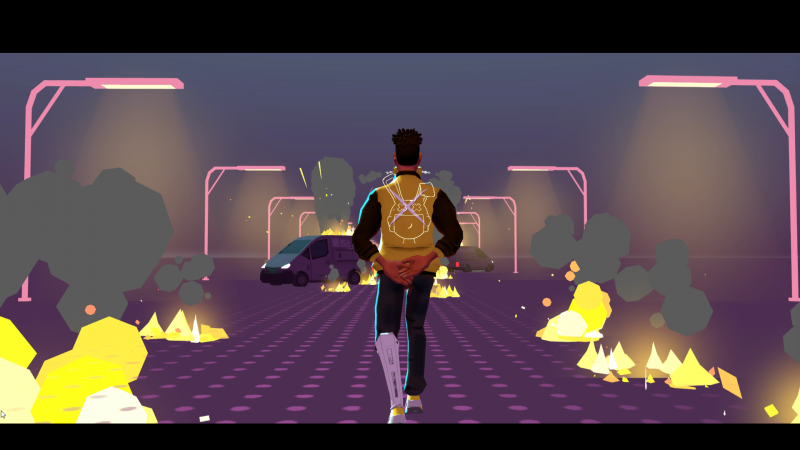 On its surface, the gameplay of Aerial_Knight’s Never Yield is not all that interesting. You run from left to right, sliding, jumping, and sprinting past obstacles until you reach the end of a level a few minutes later. After a while, it gets a bit bland on the easier difficulties. However, bolstered by a fantastic soundtrack and strong-if-redundant art style, Never Yield is an engaging journey through a dystopian Detroit that, at only an hour or so, is worth taking.

You assume the role of Wally, as he races through Detroit after retrieving his stolen property. Along the way, police, drones, traffic, and all manner of roadblocks get in his way, attempting to stop him from taking back what’s his. The story, which is told through brief cutscenes before each level, is serviceable at best and not much deeper than the set-dressing that establishes why you’re running and what you’re running from. But in a game that consists of only running, it is enough to get the job done.

Never Yield is an autorunner, so Wally automatically dashes forward, leaving you to focus on dodging what’s in your way. You have four moves at your disposal – small jump, high jump, slide, or dash – each tied to a different directional button and colored to match on-screen prompts. For example, when Wally approaches a slide, blue highlights appear on the right side of the screen. Additionally, the hurdle itself is blue, and time slows briefly, allowing you to gauge the distance before you need to pull off your move. I really like how Never Yield telegraphs oncoming obstacles before I reach them. More often than not, missing one felt like my fault; I had the information needed, I just messed up the execution. There were only a few exceptions. For example, I struggled to nail the timing in one mid-game level where I jumped over a moving van. I had to retry this sequence more times than I wanted, which tested my patience, but these moments are few and far between. 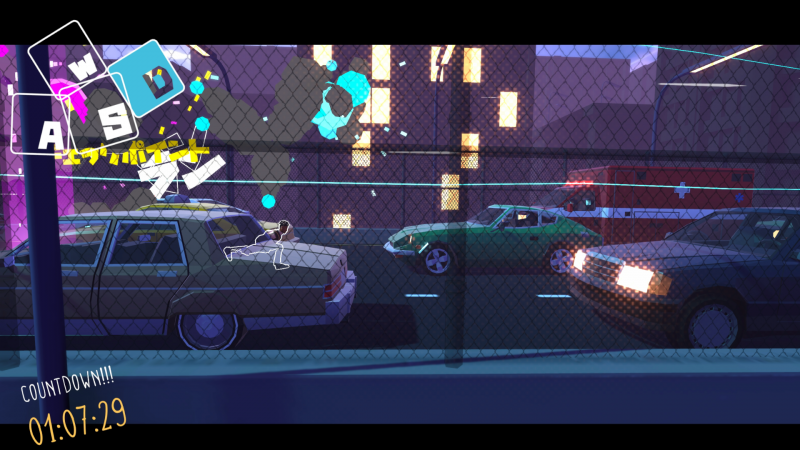 On the Normal difficulty, there’s an argument to be made that Never Yield is actually too good at warning you about oncoming threats. Throughout my first playthrough, I rarely felt challenged. By the end, the whole game started to feel bland, as the difficulty rarely ramps up from one level to the next.

Never Yield feels specifically made for its harder difficulties, where the time-slow and warnings are either diminished or removed and obstacles appear more frequently. I became much more engaged with my runs when playing on higher difficulties, and in turn, found the gameplay a lot more interesting and fun when actually challenged. I recommend bumping your difficulty up as soon as you can. 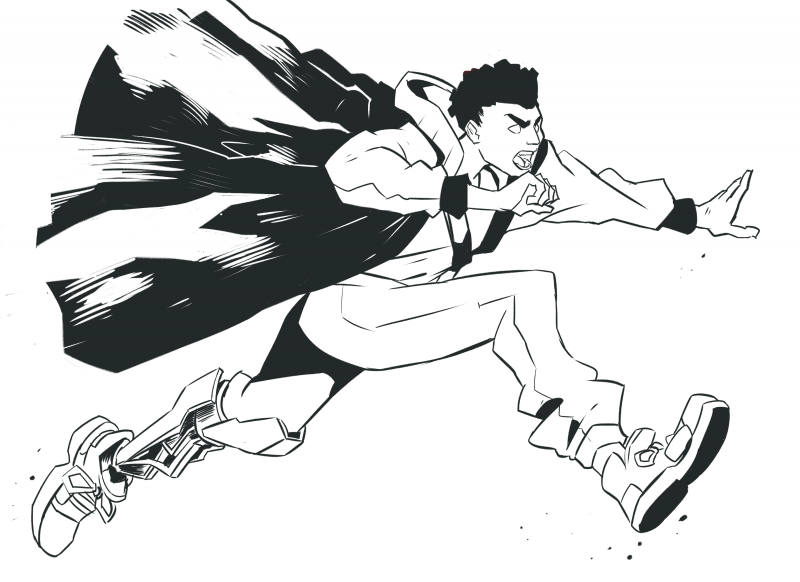 Never Yield’s Detroit takes liberal inspiration from cyberpunk properties that came before – which is mainly to say it’s an American city viewed through the lens of Tokyo. While amalgamating an American city with an Asian one to insinuate retro futurism is pretty derivative at this point, Never Yield does have a good style. The cel-shading makes the game look slick and the neon against the nighttime sky offers a nice contrast. Even though I can’t say I was floored by the game’s setting, I did enjoy it.

What did blow me away in Never Yield was its soundtrack, which without a doubt is the star of the entire game. Composed by artist Danime-Sama, the soundtrack combines jazz, hip-hop, rock, and a whole host of different genres into a completely fluid soundscape that fits the gameplay and setting in equal measure. Every time I went to a new level, I was excited to hear the next song, and never once did any of them disappoint. There’s even a level where you fight against a guitarist, who’s playing the solo in that level’s song, creating physical music in the world you must avoid. That rules.

Never Yield is a slick package. Once I raised the game’s difficulty, the fantastic soundtrack, fun world, and engaging gameplay made it an experience I’ve enjoyed playing through a couple different times. Especially on Switch, it’s a game worth seeking out if you can. While it may have some minor stumbles, I found it a worthwhile run. 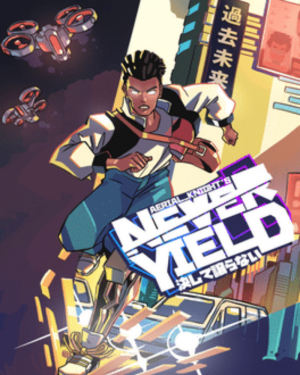 Concept: Run through a cyberpunk Detroit, jumping, dodging, and dashing past obstacles in your way

Graphics: While cyberpunk cities are overdone at this point, the cel-shaded art style lends itself to a pretty, if derivative, world

Sound: Combining jazz, hip-hop, rock, and more, Never Yield’s soundtrack is the best part of the game, complimenting its graphics and gameplay excellently

Playability: A bit too easy on its Normal difficulty, once bumped up to be harder, it’s an engaging and fun experience

Entertainment: Amplified by the soundtrack, Never Yield is a fun run through Detroit, one I felt encouraged to take multiple times