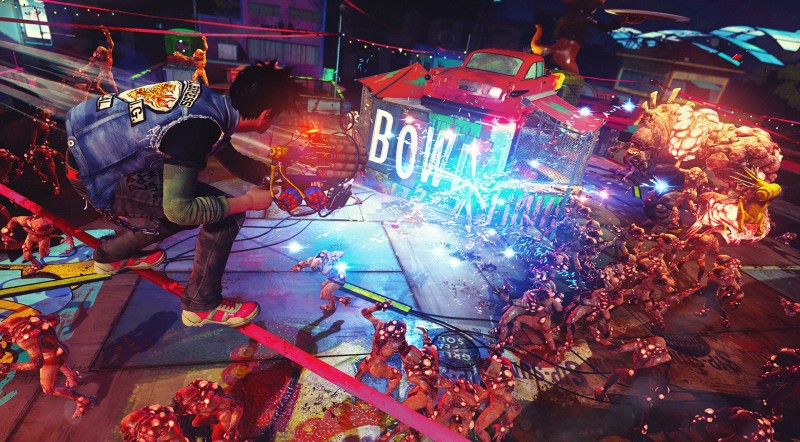 Sunset Overdrive was a wacky, colorful, and just all-around weird (in a good way) open-world adventure fueled by monster-making energy drinks. When it debuted, it was an Xbox One staple. Fast forward a few years later, and Sony ended up acquiring Insomniac Games, the studio behind Sunset, making many wonder what the move meant for a potential sequel. Shortly after a trademark filing was found by Sony for the property, the game’s director isn’t committing to a hard “no” when it comes to a Sunset Overdrive 2.

Director Marcus Smith recently sat down with GQ Magazine to talk about a plethora of topics, among them being Sunset Overdrive. “I think there are a lot of stories that can be told in that universe and I would love to return to it. I had a lot of fun making that game,” Smith told the site. Is that a definitive “yes” a sequel is happening? Nope, not quite, but it doesn’t totally rule out the idea which means that anything is possible in the realm of Insomniac.

So if it’s not a firm answer to whether or not there will ever be a sequel, why are we writing about this? Glad you asked, dear reader! Several reasons! In the same interview, Smith said, “I mean, never say never is my approach,” when asked if we would get a potential second game. “Obviously, we’re a part of Sony now, but we own the IP and so there’s nothing really stopping us other than we have a lot of really exciting things in the future.”

Hold the squees, there is more.

Earlier this year, a variety of rumors began circulating that a “revamped” Sunset Overdrive experience could be coming to PlayStation 4 and PlayStation 5 systems. Sony didn’t comment on the rumors, but those continue to gain traction with “insiders” swearing up and down they are accurate. Paired with the recent trademark, the community is once more asking for any news regarding this newly budded franchise. Even though Sony won’t be participating in E3 this year, the company has a ton of new announcements to share in the coming months. Maybe, just maybe, we’ll get some clarification.

Thoughts on Sunset Overdrive and its reception? Would you like to see this energy drink-chugging adventure make its way into this new generation of gaming? Sound off with your thoughts in the comment section below!