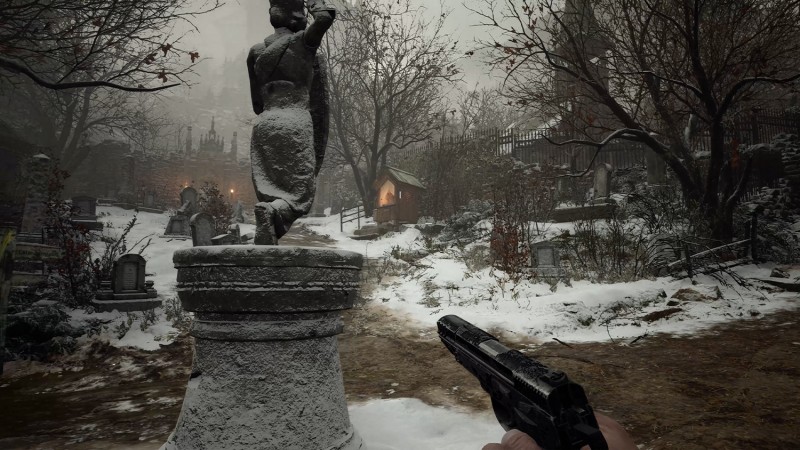 Resident Evil was built upon the idea of fighting for survival through terrifying close encounters and the claustrophobic sense of dread that precedes each turn down a new hallway. And while there are sure to be plenty of close-quarters scares in the harrowing hallways of the new mansion, Resident Evil Village aims to terrorize players in an unfamiliar play space. Join us as we give you a tour of the titular arena players will explore when the game releases on May 7.

Village is a well-documented departure for the Resident Evil series in that fans will experience a vastly different inspiration for the world and what lurks there. The unnamed village is pulled straight from the Victorian era, and Capcom had to walk a fine line between derelict beauty and the scares the series is known for.

During our interviews with the Capcom development team, art director Tomonori Takano emphasized the dual nature of the world he and his team have created. “The concept that I was striving for was a beautiful yet terrifying locale. So that was something that I was striving to work off. RE 7 was trying to reach a broader audience, so another mission for me was trying to make sure that it was also very catchy and aesthetically pleasing.”

At one moment, players will gawk at beautiful stonework and the detailed yet cluttered homes of the village before fighting off the cause of this destruction. The developer’s goal is to make sure players feel immersed in the village while making sure they stay on their toes as danger creeps in from every side.

“Because it is a much bigger environment, much wider environment,” Morimasa Sato, the game director told us. “We want to let people understand that the environments are not just expansive, in terms of horizontal, it’s expansive in terms of vertical scale as well. You’re able to climb up and fight on the village roofs. So, being able to use that terrain and environment to make the enemy a little bit more predictable and using the terrain to your advantage.”

But the village is also full of valuable resources. Like before, players will be able to find currency, treasure, and other collectibles that they can bring to our friend The Duke. This larger-than-life figure takes the place of the merchant from Resident Evil 4 in that he’ll be your source for weapon and health upgrades and whatever else Ethan needs to find his daughter.

The Duke’s supplies are essential, as Ethan must be prepared to fight off the hairy denizens that have brought this village to its knees. But who are the Lycans, and how do they play? You’ll just have to keep it locked to Game Informer to find out.

Enjoying the Resident Evil Village coverage? Be sure to check out our game discussion on this week’s episode of The GI Show along with our exciting coverage hub below!