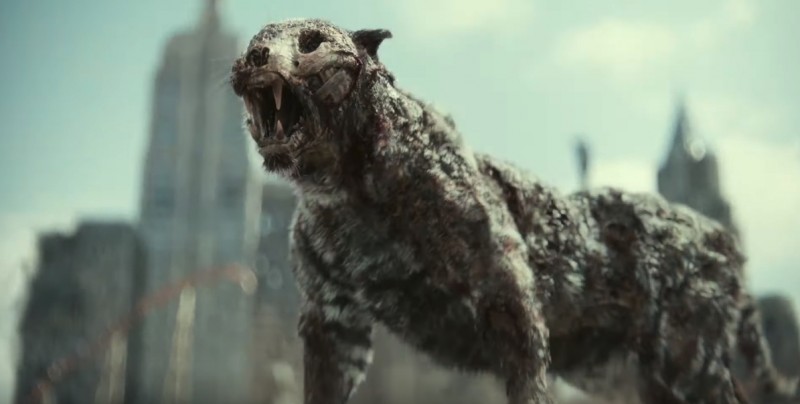 Zack Snyder is having a huge year. Hot off the heels of his epic, four-hour-long Justice League cut, he’s ready to introduce the world to zombie tigers in Army of the Dead, a new film that will be heading to select theaters and Netflix on May 21. A new trailer shows us this threat in action, and it’s every bit as hilarious and cool as you would hope.

Described as a “zombie heist film,” Army of the Dead follows a group of humans who enter the ruins of Las Vegas to try to extract $200 in cash from a zone overrun by zombies. And these aren’t the kind that slowly shuffles their feet and want to eat brains. While the latter may still be true, these undead are organized, weaponized, and seriously threatening humanity’s hope of outliving the outbreak. The United States government is so worried about this new zombie type that it is going to nuke Las Vegas in 32 hours.

Army of the Dead follows Scott Ward (played by Dave Bautista),  a washed-up war hero who works at a restaurant and is recruited for the heist by a casino boss who knows of the stash. As you can see from the trailer, Ward has lost none of his skills and puts on a clinic against the aggressive zombie hordes.

Before becoming one of the main creative voices behind DC Comics’ feature films, Snyder made a name for himself with the awesome horror film Dawn of the Dead, which gave us a good look at what a zombie outbreak would be like in a shopping mall. Army of the Dead brings back fond memories of that movie, with dramatic aerial shots of zombies swarming buildings and a cast of characters that almost comes across as cartoonish yet somehow fits the dark tone.

Army of the Dead is yet another huge film that will be debuting at home and in theaters at the same time. Yesterday, Netflix also announced a live-action Gundam film will be coming exclusively to its streaming service in the near future.

Source: Game Informer Get Your First Look At Zombie Tigers In Zack Snyder's Army Of The Dead