Marvel’s WandaVision is inspired by many TV classics that came before it, like I Love Lucy, Bewitched, The Brady Bunch, Growing Pains, Family Ties, Malcolm in the Middle, and Modern Family. While many of those shows had an iconic opening theme that began each episode, WandaVision takes it a step further. Almost every episode features a new opening theme and distinct style, and we thought we’d gather the lyrics and offer some thoughts on what they could mean all in one place.

As of this writing, all nine episodes of WandaVision are available on Disney+. As each episode aired, we updated this article with the lyrics and possible meaning of what these intros could have been trying to tell us.

Beware of some spoilers below!

WandaVision: Episode 9 – An Epic Series Finale With No Opening Credits

Episode 9 of WandaVision, “The Series Finale,” had no opening title sequence at all, but it did feature both a mid-credits and post-credits scene.

Episode 8 of WandaVision, “Previously On,” actually doesn’t have an opening title sequence at all, let alone a retro sitcom one. But it does have a mid-credits scene that reveals a major new character…

What Sitcom Is WandaVision Episode 7 Based On?

WandaVision has officially entered the 2000s, and this week’s episode and its intro take clear inspiration from shows like Modern Family, The Office, and Happy Endings. Fun Fact: Avengers: Endgame directors the Russo brothers worked on Happy Endings!

While there were no lyrics featured in the intro to this episode, we were treated to a special ending theme song that not only had words, but also helped deliver the big twist in Episode 7. 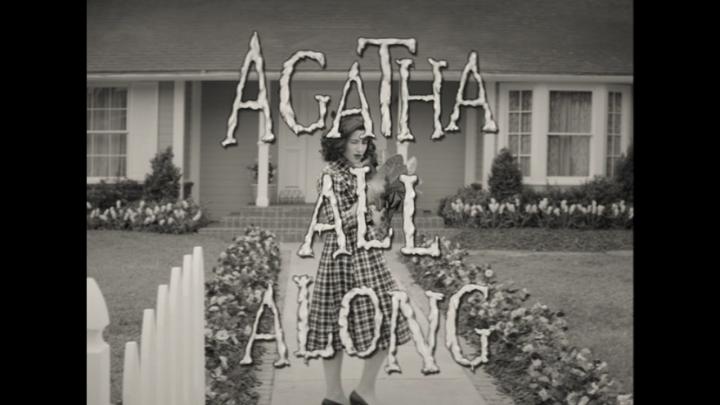 The whole song, which itself is an homage to shows like The Addams Family and The Munsters, helped re-contextualize all the goings-on in Westview and revealed that it was… Agatha All Along who’s been behind things. (Or at least, that’s what the show wants us to think for now.)

Who’s been messing up everything?

Who’s been pulling every evil string?

That you haven’t even noticed

And the pity it (the pity is)

It’s too late to fix anything

Now that everything has gone wrong

Thanks to Agatha (Ha!)

“And I killed Sparky, too!”

Oh, and make sure you watch the credits, as there is a mid-credits scene you won’t want to miss!

What Sitcom Is WandaVision Episode 6 Based On?

This week’s WandaVision was an homage to the ’90s, and the intro celebrated that by recreating the look and feel of the opening to Malcolm in the Middle, the single-camera sitcom about a zany family that starred Frankie Muniz, Jane Kaczmarek, and Bryan Cranston.

The lyrics of the intro are very much in sync with specific characters, all beginning with Wanda. “Don’t try to fight the chaos” and “don’t question what you’ve done” appear to be a hint at Wanda losing control of what’s happening in WandaVision, while also showing she does not want to give it up or question what exactly she is doing to the people in Westview.

When we switch to Vision, the lyrics start talking about how “some days, it’s all confusion,” but then question whether “it’s all illusion” and if he should just “sit back, enjoy the show.” Vision clearly knows something is up in Westview, despite Wanda attempting to reassure him that everything is perfect. 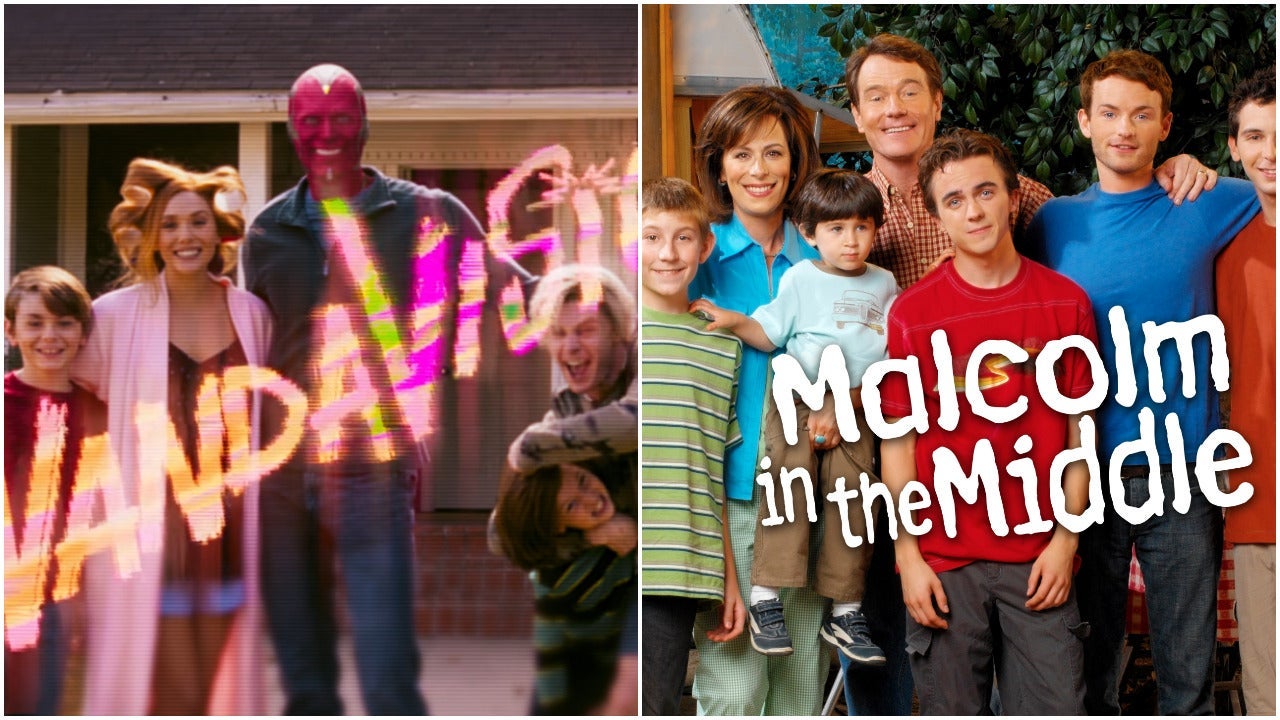 Agnes makes an appearance in the intro alongside the words “let’s keep it going,” possibly teasing that she may be part of what’s happening in The Hex.

The theme song ends with “Let’s keep it going, though there may be no way of knowing, who’s coming by to play.” As these words are sung, Pietro Maximoff, who is played by “himself,” is the focus. This could further the theory that this version of Pietro was not created/brought to Westview by Wanda, but something else entirely.

Don’t try to fight the chaos

The game can try to play us

Don’t let it stop the fun

Some days, it’s all confusion

But if it’s all illusion

Sit back, enjoy the show

Through each distorted day

Though there may be no way of knowing

Who’s coming by to play

This week took WandaVision’s in-universe sitcom to the ’80s, and the intro is a clear homage to both the in-progress painting style look of the Family Ties intro and the photos of the main cast growing up in Growing Pains intro. The lyrics to the song playing over the intro are very much a metaphor of this world Wanda has seemingly created in Westview. From “we’re making it up as we go along” to “forces may try to pull us apart,” the lyrics tell the story of this world Wanda has made and how those on the outside, mainly S.W.O.R.D., are trying to stop it.

The line “when push comes to shove, we’re making it up” is also another nod to Wanda’s firm grip on Westview and how, no matter what S.W.O.R.D. tries to do or how close Vision comes to figuring out the truth, she will continue making up this sitcom reality and pretending like everything is perfectly normal.

Forces may try to pull us apart

But nothing can phase me if you’re in my heart

Crossing our fingers, singing a song

We’re making it up as we go along

Through the highs and lows

We’ll be right, we’ll be wrong

We’re making it up as we go along

And there will be days

We won’t know which way to go

But we’ll take it higher

You’re all I desire

When the going gets tough

When push comes to shove

We’re making it up

‘Cause we got love

There was no proper intro this week, as the show left Wanda’s sitcom world to explore what’s going on outside “the Hex.” Instead, check out our review!

WandaVision: Episode 3 – We’ve Got Something Cooking

WandaVision’s third episode takes us to its version of the ’70s, and the intro, which is inspired by classics like The Brady Bunch, helps bring viewers into this time period wonderfully. Everything from Vision building a swing set to Wanda and Vision shopping for a crib and giraffe toy hint at the main focus of this episode – the birth of their twins. We also get a glimpse of the residents of Westview.

As for the lyrics, they also hint at the arrival of both Tommy and Billy with words like “We’ve got something cooking!” The “some sudden surprises, come in all shapes and sizes” line also tease that this pregnancy will be anything but ordinary.

We got something cooking

We’ve got something cooking

And who knew we could

But it’s groovy and fun

It’s me and it’s you

Together, one plus one

Is more than two

Come in all shapes and sizes

But it’s rainbows and sun

It’s you and it’s me

Together, one plus one is family

While the second episode’s intro may not feature any other lyrics besides “WandaVision!” the intro is PACKED with Easter Eggs and references.

While the whole style is very reminiscent of the classic TV show Bewitched, this opening number features possible references to classic Marvel characters like Agatha Harkness and Grim Reaper. There may even be a nod to the Infinity Stones in there as well.

The intro to WandaVision’s first episode sees Wanda and Vision arriving in Westview in wedding attire. It has a very classic TV feel with a theme song that could have been pulled right out of the 1950s.

As for the lyrics, they don’t reveal too much, but they do mention that Wanda and Vision are a newlywed couple who just moved to town to leave the big city behind for a much quieter life.

The full lyrics are as follows:

A regular husband and wife

Who left the big city to find a quiet life

She’s a magical gal in a small-town locale

How will this duo fit in and fulfill all?

For more on WandaVision, be sure to check out our explainer on the show and the comics that could inspire it, how WandaVision fits into the MCU timeline, and when each episode of WandaVision airs on Disney+.