Today Newegg is offering bonus gift cards when you purchase an Oculus Quest 2 VR headset and/or most of the official accessories. The Quest 2 is popular enough (and cheap enough) that there aren’t very many discounts on it, and finding deals on accessories is even more uncommon. This is easily the best VR headset I’d recommend if your main goal is to play Beat Saber. 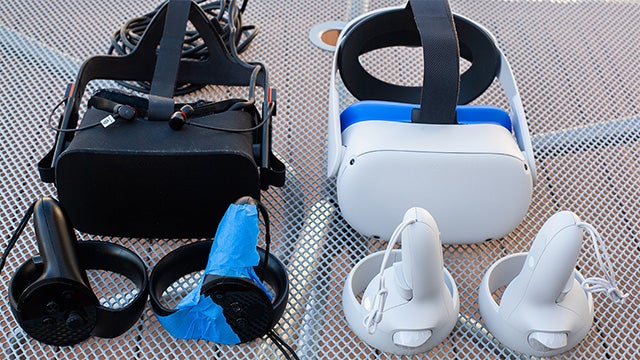 Newegg is offering a free gift card when you order either the Oculus Quest 2 64GB or Oculus Quest 2 256GB models. The Quest 2 is easily the best VR headset to get right now, thanks to its high resolution, wireless freedom, PCVR capability with Oculus Link, and low price.

On a personal note, I own the Oculus Quest 2 specifically for Beat Saber. I purchased the original Rift CV1 headset back in 2016 and since then I’ve clocked 400 hours in Beat Saber. As a player who values tracking fidelity and controller ergonomics above all else, I was a firm believer that nothing could match the 3-sensor setup of the Rift. I skipped over the Rift S and original Quest for that reason. The Vive, Index, and Reverb G2 were simply too expensive for me, since I only really play Beat Saber and little else (the exception being Half-Life Alyx, which is an exceptional game). When the Quest 2 came out, I was still quite happy with my Rift, but the price point had me very intrigued. I purchased it fully expecting to return it, but boy was I wrong.

In my opinion, the Quest 2 has superior tracking over my Rift 3-sensor setup. Whereas on the Rift I could score at least an “S” on every song in Expert+ on Beat Saber’s official setlist (including all the DLCs), on the Quest 2 I’ve been able to score an “SS” and/or full-combo most of them. If you’ve played Beat Saber for a while, you’re probably aware that the offical setlist is very limited and you’ll want to download the thousands of modded songs available on the internet. I purchased the Oculus Link cable so that I could play all of my modded songs that I’ve accrued over the years (I have almost 1,000 downloaded songs). As of now, it works perfectly at the full Quest 2 native resolution, 90Hz refresh rate, and no perceptible lag. It also allows me to play my Rift copy of Beat Saber without having to buy a separate copy for the Quest 2. Nowadays I exclusively play in PCVR mode.

The Quest 2 and the controllers are definitely heavier than the original Rift and Touch controllers, but I was able to get over that after a couple of days. I also upgraded to the Elite Strap, Oculus Link cable, and a silicone face cover, and I had to factor those additional purchases in. All in total, the MSRP probably ran closer to $450. Let’s be real, that is ALOT to spend for essentially one game, but in my defense it was and still is my preferred form of exercise. I’m a pretty lazy guy when it comes to exercise, and I’ve tried to break that habit by getting at-home equipment like a pair of adjustable dumbbells, a power tower, and a fancy rower, but Beat Saber is really the only form of exercise that I return to again and again. So if you’re like me and you’re looking to get a VR headset specifically for Beat Saber, in my opinion there is no other headset to consider.

Other Deals for February 25

Source: IGN.com The Oculus Quest 2 Is the Best VR Headset for Beat Saber and It's on Sale