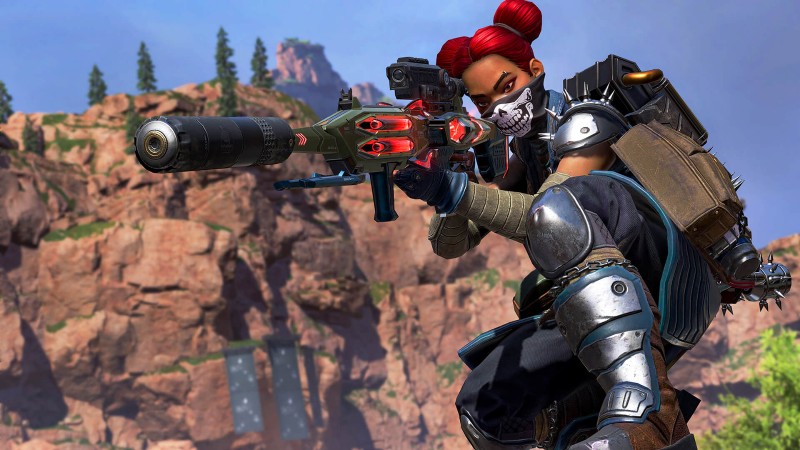 Apex Legends Season 7 introduced a new arena, Olympus, and offensive legend, Horizon. Horizon earned a top spot in the meta of the competitive shooter’s ranked mode, and Olympus changed the flow of engagements with congested residential and commercial districts connected by open prairies devoid of cover. Season 8 launched last week and adds the bombastic Fuse to the roster and a new heavy-ammo gun to the loot pool. More importantly, the classic Kings Canyon map is back, although it has seen better days. As someone who’s been playing Apex Legends since it was released a little over two years ago, I’ve compiled another guide for veteran players and newcomers alike! Here are some optimal points of interest worth exploring, a collection of reliable weapons, and smart legend combinations that could benefit both Apex Legends PC and console players during Season 8. 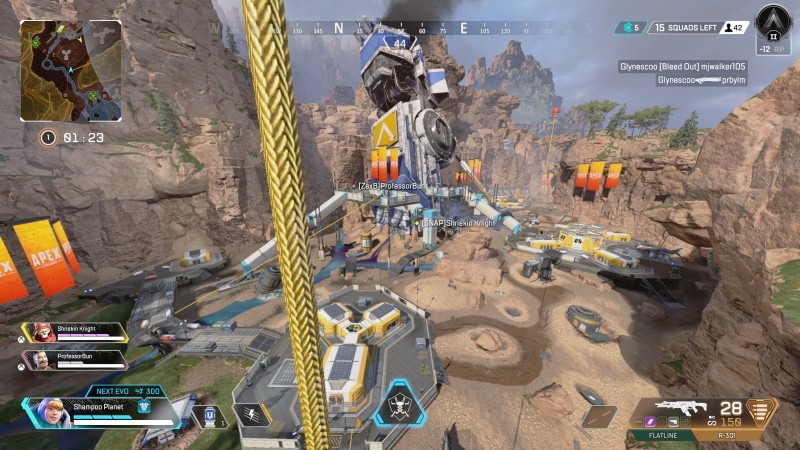 In the trailers leading up to the launch day of Season 8, a massive gunship was sabotaged and forced to the ground during Fuse’s debut celebration. “Crash Site” was birthed from the devastation that followed and emerges as an entirely original sector (this part of Kings Canyon was inaccessible in previous seasons). Whoever secures the scaffolding and ramps surrounding the wreckage can use the higher elevation to execute ambushes on any squads looting below. Moreover, if you manage to find a long-range firearm, like the new 30-30 Repeater, you’ll be able to pick enemies off with ease from afar. When the smoke clears make sure to stop by any armories you see for legendary loot. A quick southwest rotation will bring you to another great site: 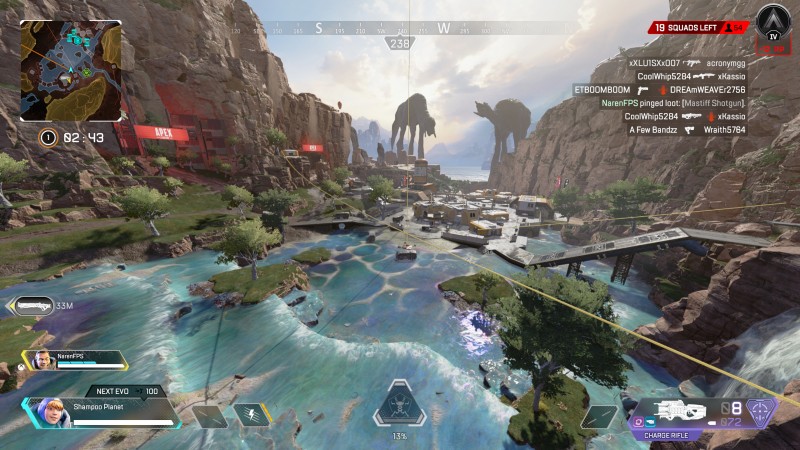 While not as popular as fan-favorite points of interest — namely, Bunker and Skulltown — Slum Lakes was a solid Plan B drop point that provided rare loot within the confines of a sizeable shantytown. Rusted generators and piles of scrap adorned rooftops making weapons like the G7 Scout and Longbow shine during the final stages of a match. Season 8’s “Spotted Lakes” revamps the entire area. Say goodbye to Slum Lakes’ mud fields and rusted pipelines. Say hello to aquamarine ponds, adjustable sniper towers, and multi-floored tents with dangling ziplines for fast-paced navigation. A large dam sits at the center of Spotted Lakes and houses a plethora of collectibles. However, the structure’s many sightlines and corridors could be fatal if you’re not aware of your surroundings, so stay alert! 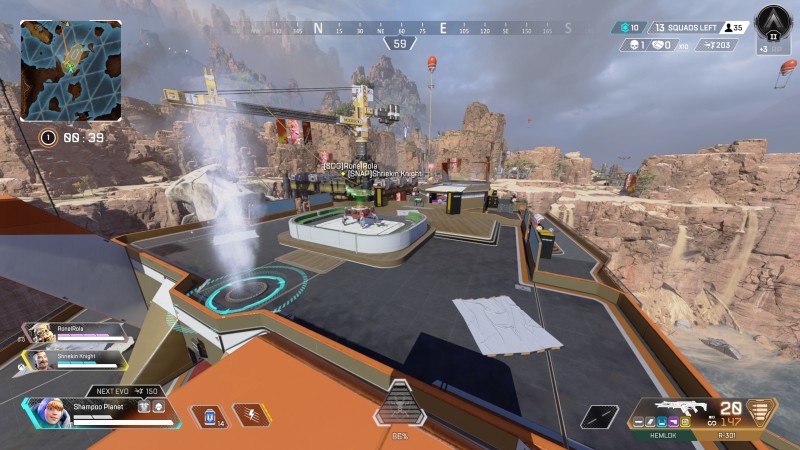 Everyone loves “Mirage Voyage” — if not for the great loot, then for the laughs as players are more likely to die seconds after arriving since half the lobby always lands here. In Kings Canyon, Mirage’s party cruiser floats above the roaring sea. If things go wrong, you can use the wind vents to redeploy somewhere else, but, other than that, it’s a one-way trip into the watery depths. Rise above your adversaries, start the party for the sake of delicious chaos, grab whatever weapon you can (I suppose even an un-kitted Mozambique will do), and claim your rights to the levitating ship and its grand treasures. Third parties are less likely to happen since Mirage Voyage is sectioned off from the rest of the map. Nevertheless, foolish squads might attempt to drop on you from the nearby jump tower, but you’ll spot them from a mile away.

Both the R-99 and Volt appeared in the best weapon loadouts section of my Season 7 guide a few months ago. The two submachines guns have not only returned because of their staggering popularity but also because of how much value they bring to combat. There’s nothing quite like advancing on a vulnerable enemy and “one-magging” them with the R-99’s manageable hip-fire. And taking down a retreating team with the Volt’s predictable recoil pattern is always highlight-worthy. Throw in the new 30-30 Repeater rifle, — a versatile weapon that packs a punch and finds success at virtually every range — equip it with a 2X HCOG Bruiser or 3X Ranger, set up at a vantage point (the towers at Spotted Lakes are a perfect spot if the ring allows it), and you’ll find that laying waste to your adversaries is far easier than it’s ever been.

Yeah, yeah, I’m not a fan of the Spitfire either. In fact, I’ve always advocated for the Devotion LMG instead because of its stopping power and potential to rip entire squads apart. But when you consider the fact that Season 8 introduced legendary magazine attachments to the loot rotation and that the Spitfire’s recent damage output has increased by an entire point, then you’ll realize that it’s more than earned its spot on this list. The Alternator (a personal favorite of mine) is also a suitable option seeing as how the seemingly unremarkable SMG has also received a damage buff. And, of course, you’ll have the devastating Mastiff in your back pocket for any unexpected flanks or too-close-for-comfort engagements.

You just can’t go wrong with this first paring – these rifles worked effectively in Season 7 and that trend has continued into Season 8. If you’re reading this, you’ve likely played Apex before and so the R-301 needs no introduction. The Hemlock, however, has slowly made its way up the loadout popularity chart over the past year and can serve as a suitable substitute for a sniper rifle or primary weapon. And if you’re an accomplished sharpshooter, the Wingman is a great sidearm. Last season, the Quickdraw attachment was an exciting new feature for players that like to ADS with the powerful revolver, but I’d suggest that you grab a Skullpiercer for the Wingman instead.

I might be a Wattson one-trick, but Gibraltar is by far my favorite legend in the game. In some agitated circles he’s still considered overpowered, and here’s what I’ve always said to that: If you can’t beat ’em, join ’em! Gibraltar’s talents are often employed at higher levels of play because of his multifaceted kit. The lovable defender can provide indestructible cover for quick heals or dire revives by dropping his “Dome of Protection.” And his “Defensive Bombardment” airstrike can quickly decimate teams caught out in the open. The guy also happens to be a walking tank (he takes 15% less damage) and dons an arm shield that has its own health pool.

Wraith players can rest easy knowing that their only job is to teleport teammates out of risky situations. And Wattson provides some extra protection by evaporating throwables and airstrikes with her “Intercept Pylon.” Just don’t forget: Gibraltar’s presence is the key to this deadly combination.

Crypto isn’t what he used to be. In fact, his updated abilities solidify him as one of the best legends for catalyzing team fights. The elusive hacker’s Surveillance Drone scouts enemies within a 200-meter radius, emits an EMP that does significant shield damage, recovers death boxes without putting its operator in harm’s way, and resurrects teammates at respawn beacons. Crypto is simply a jack-of-all-trades that can contribute to every stage of any given match. Horizon’s “Gravity Lift” can get the less-mobile Crypto on high ground in the blink of an eye in case he somehow gets cornered, and Octane’s “Stim” supplies him with a huge speed boost that lets him quickly collapse on EMP-affected targets.

I couldn’t make this guide without including the new legend. While I don’t think Fuse will make any substantial waves in the meta like Horizon continues to do, he’ll definitely be selected in Apex Legends’ lower stakes quickplay mode. Fuse’s entire skillset is rendered useless against smart Wattson players, but his ultimate, “The Motherlode,” can find some incredible value when dropped on preoccupied teams — the darn thing can be fired from up to 200 meters away! Simply put, Fuse was designed with third parties in mind and should play a large part in determining how his team will engage in largescale battles. Revenant’s “Death Totem” is still a terrifying “second life” option for when you bombard a team with Fuse’s abilities and want to pick off stragglers without taking serious damage. Finally, the frontier’s most respected medic is there to revive or heal her squadmates in case things don’t go as planned.

Perhaps the most important tip I can give is to commit to whatever playstyle makes you comfortable. Yes, honing mechanics in Apex Legends is undoubtedly important, but that first step to becoming successful in the game is all about sticking to what works for you. So go out and grab two buddies, figure out each of your tactical strengths, and drop into the various untamed biomes of King’s Canyon with the highest level of confidence that you can muster!