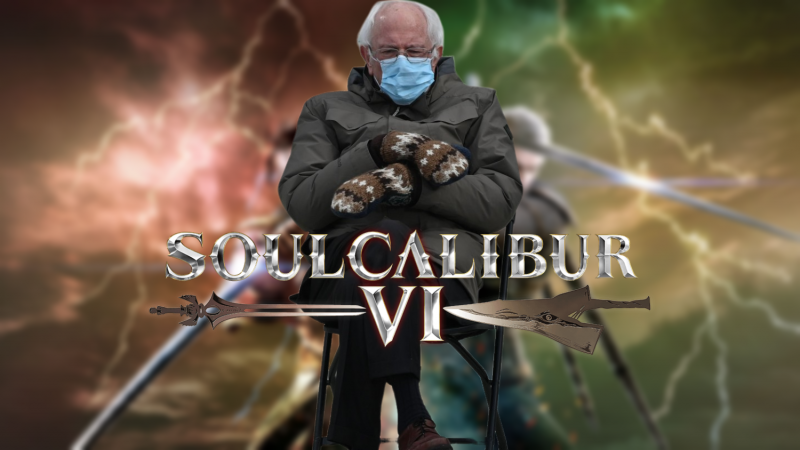 Earlier this year, the United States swore in a new president to take the helm over the next four years with Joesph Biden Jr. but the real star of the 46th inauguration was Bernie Sanders huddled in the stands with an admittedly adorable pair of mittens on to battle the cold. The image of Sanders in his full winter gear went viral, becoming a meme that was seen everywhere, and now that same inauguration meme is invading the world of SoulCalibur VI with this Bernie mod.

This hilarious and wildly random mod was spotted by the folks over at Game Rant and as a huge fan of modding (as seen with our ongoing Mod Corner series), I couldn’t pass up the chance to share this weirdly perfect mashup.

Why go through the motions of creating your own Bernie Sanders in the fighting game’s character creator when you can just mod him in instead? Modder ‘User619’ did just that by recreating the mittenfied politician-turned-meme and placing him front and center in the world of SoulCalibur VI.

Unlike many of the mods I share, this one can’t be found on Nexus. Instead, this mod can be downloaded through Mediafire right here. In the video above, the creator of the Bernie Sanders chair mod shows off how exactly this works and how players can further customize the look and feel of this crossover.

While the meme itself is honestly wholesome as can be (in my personal opinion), it actually did some good as well. Sanders himself saw the image of him huddling against the cold go viral and decided to use that momentum to bring about some positive change. His team took the image and put it on a hoodie, selling said hoodie for $45. 100% of the proceeds, every last cent, went then to raise over 1.8 million dollars for Vermont’s Meals on Wheels program.

For those that don’t know, Meals on Wheels is an organization in the United States that delivers affordable food options to senior citizens in their homes. This organization became even more invaluable during 2020 where many older men and women were at risk going outside of their homes with the spread of COVID-19, a virus that posed a unique threat to those of older generations and with previous health conditions. Meals on Wheels helped get the elderly the food they need while staying safe and within the comforts of their own home. The photo-turned-meme helped that organization immensely in a situation where Sanders could have easily just pocketed that money should he have chosen to do so.

What do you think about the Bernie Sanders inauguration meme mod in SoulCalibur VI? Sound off with your thoughts in the comment section below! You can also visit the Meals on Wheels website to learn more on how you can help.