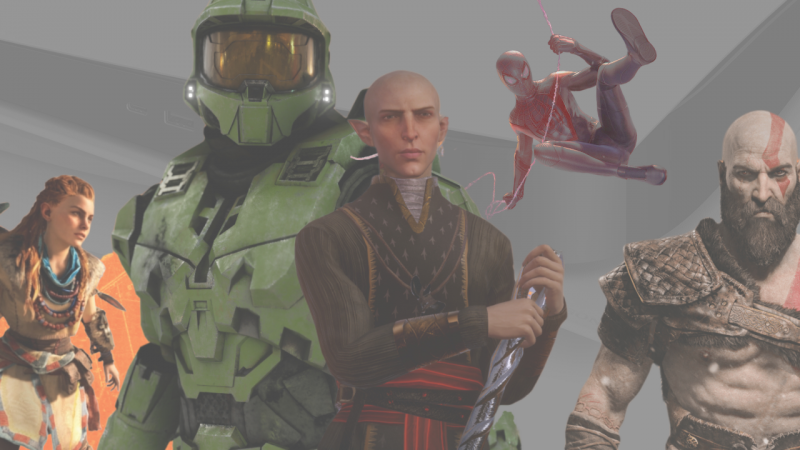 The next generation of gaming is almost here with the Xbox Series X/S and the PlayStation 5. New platforms mean new adventures and stories to treasure forever. While every new generation has had something special to offer, there are a few titles I’m most excited about when thinking about diving into next gen.

From pretending I have more coordination than I actually do with a solid shooter to taking to Thedas once more within a new BioWare tale, here are the games I’m looking forward to the most in the coming years.

I’ve made no secret of my undying love for BioWare’s Dragon Age franchise. It’s a series I have over 20 playthroughs of and many more to come, it’s one of those stories that feels like coming home. When real life gets to be too much, Thedas and all of its drama is there to help me escape.

Following Dragon Age Inquisition and its Trespasser DLC ending, I have a score to settle with a certain egg (looking at you, Solas). With the most recent comic series and Tevinter Nights taking fans to the land of blood mages, magisters, and social injustice (and also the oh my damn Fenris and Dorian characters), the next entry in the Dragon Age franchise looks to make those side stories add up in a big way. Much like the books aided in setting up the world of the previous three games, Mage Killer and Tevinter Nights have set the stage beautifully for Dragon Age 4.

Dragon Age 4 remains largely a mystery. The first time we learned about the newest game was back in 2018 at The Game Awards. We know that Solas is coming back and given the nature of Inquisition’s Trespasser ending and the corresponding comics, it’s clear that the next game in this franchise will be rooted in Tevinter and with a cool looking skull-headed guy thanks to the most recent behind-the-scenes look. All I know is I want to beat the ever-loving crap out of a certain egghead and I’m hoping beyond all hope that I might be able to see my beloved Fenris (Dragon Age 2) again with the northern narrative.

Horizon Zero Dawn was a stunning PlayStation 4 exclusive that shattered records. It told a unique tale and Guerilla Games immediately made me fall in love with its story rooted in duality and evolution. Aloy is an incredible protagonist that, as a woman, I identified with immediately. I loved her strength and her compassion; I love how she continuously evolved and became more and more sure of herself despite the world around her telling her she didn’t matter. There’s a strength in Aloy and her writing that feels so important and to see where she goes next? Yeah, I’m excited.

Forbidden West looks similar to the first game in many ways, including its intricate combat and freedom to approach inter-world interactions from a variety of different ways. The writing in Zero Dawn was also flawlessly fluid. Each conversation was impactful, meaningful, and immersive with how realistic and natural it all felt.

Taking down humongous robotic dinosaurs, traversing a dangerous-yet-beautiful open world? The first game was damned near perfect, and I genuinely can’t wait to see where Guerrilla goes next with its sequel.

343 Industries finally gave us our first look at Halo Infinite gameplay earlier this year. While many had an issue with its less-than-impressive demonstration of next-gen capabilities, what was shown made me even more excited for what’s next.

This studio has had one hell of a time with this franchise once the pass off happened from Bungie. The changeover started off strong, but Halo 5 was arguably the weakest link of their run. Since then, 343 has been transparent about its “past mistakes” and promises that Halo Infinite aims to right some of the perceived wrongs alongside a pretty swanky Master Chief upgrade and Halo 3 vibes.

When the gameplay was shared, I was in the camp that became progressively giddier as more was shown off. Craig the Brute is a freaking national treasure, and honestly? The graphics looked more like an art style choice than anything. This felt organically Halo, which is a series that has always been close to my heart.

Sony showed us our first look at the upcoming God of War sequel, Ragnarok, back in September and while the teaser trailer was just that — a teaser — it was enough to get fans hyped. Hi, it’s me. I’m fans.

When the revamped God of War debuted on the PlayStation 4, the love for the game was immediate. With challenging combat, intriguing characters, and a new way to see Kratos with his fatherhood role, everything about the Santa Monica Studios’ take was a huge hit with PlayStation players. The sequel will presumably take place following the perceived betrayal between Kratos and Freya after he murders her son Baldur. The end of the first game saw Freya promising her revenge, a vow that will continue on with the upcoming sequel.

Honestly, I can’t wait to dive back in with Kratos. I was a huge fan of the initial games before the PS4 hit but where the studio took the latest title absolutely blew my mind. When the credits rolled, this was one of those tales that left me wanting more. Plus, Freya is a total badass; I can’t wait to see her fury in full form.

Obsidian Entertainment revealed their upcoming RPG Avowed earlier this Summer, and the Skyrim comparisons immediately came pouring in. Obsidian took a stab at another Bethesda franchise previously with Fallout: New Vegas, and it looks like they are doing the same – unofficially – with Avowed.

Admittedly, we don’t know much about the upcoming RPG other than the previously revealed reveal trailer, but its mechanical similarity to Skyrim is uncanny. First-person perspective aside, the dual-wielding showmanship looks like a prettier version of the Elder Scrolls title that just keeps popping back up.

For those familiar with Obsidian’s Pillars of Eternity, Avowed is set within the same world of Eora. This sets up Avowed to have an incredibly branching narrative outside of familiar combat. This is one of those games I can’t wait to see more of, because I absolutely loved Pillars of Eternity and never want to leave that world. Being able to explore that universe in a more personal way with this first-person adventure feels like a dream come true.

I’m also hoping this game presents more of a challenge. As much as I like Skyrim, it always felt like a watered-down Morrowind and Oblivion to me. I want the fight back, and less hand-holding. If anybody can do it, it’s Obsidian.

I’ve been a fan of Miles Morales ever since his debut in the comics back in 2011, but it was the Into the Spider-Verse film that truly made me see him in a different light. Fast-forward to Insomniac Games’ Marvel’s Spider-Man where we saw an even nerdier Miles in all of his fandom glory and it was the type of pure wholesomeness we need always in our lives.

When Sony revealed that Miles was getting his own standalone story expanding upon the PlayStation 4 title, the fangirl screams erupted immediately. With all of the information we’ve learned over the months, especially with our cover story diving deep into this world, this is one of those games that is peak excitement. Even beyond just the incredible story, I’m excited to swing around New York City again!

I was already excited for Bethesda’s Starfield just because I’ve loved this studio’s games for as long as I can remember, but it was the recent Microsoft acquisition of the property that propelled that excitement out of this world.

Why would that news make me excited? I’m glad you asked.

While I firmly believe that not every game will be an Xbox Series X exclusive, not even The Elder Scrolls VI (which you can learn why here), I do think Starfield will be. Starfield is a space RPG that is utilizing Bethesda’s overhauled engine currently in progress, with an in-depth universe that will take us beyond the boundaries of earth. While my love for Halo, as previously mentioned, knows no bounds, public perception of the Xbox staple franchise has been on a steady decline post-Halo 3. The space shooter is among my favorite gaming experiences but Microsoft needs something to replace it if Halo Infinite doesn’t perform the way 343 Industries hopes. That’s where Starfield comes into play.

Starfield is poised, if done correctly, to be the perfect new flagship game for the Xbox ecosystem. Because of this, the efforts from the team are going to be boosted in a positive way. Pair that with the additional resources that Microsoft is providing as part of its terms for the ZeniMax acquisition, and this could just be the next big space journey.

Plus, it’s outer space. Come on.

For transparency’s sake, I’m just going to get this out of the way now: current-gen Sephiroth. While I understand I can’t just drop the mic and say “enough said,” he’s honestly the reason I legitimately cried when Square Enix revealed that Final Fantasy VII was getting a remake.

Sephikins was my first video game crush growing up, so to see those luscious locks flowing in the digital wind made my fangirl heart soar. While the ending of the first part of the remake wasn’t a hit with everyone, I enjoyed getting a surprise twist that deviated from the original. While remaining mostly faithful, the changes made to the story made it feel brand new. While we have no idea when the next installment of the remake will be ready for launch, you’ll know when we get the release date because you’ll be able to hear my pterodactyl scream from anywhere.

There are so many games coming out for the next generation of systems that it’s hard to keep track. I know I am excited for Cyberpunk 2077, which I think everyone is, but I’m also giddy to find out what the next generation of indies has to offer. Indie games have finally started to get the recognition they deserve and with big companies like Microsoft investing heavily into them in terms of shining a much-needed spotlight, the future is bright. Since indies offer a lot more freedom in terms of creative vision due to the nature of the development infrastructure, I’m excited to see where they go next with next-gen technology at the helm.

What are you most excited to see when the next generation of games arrives? Sound off with your thoughts in the comment section below!