Archer Season 11 Finale: Post-Coma Antics and What to Expect in Season 12

It wasn’t all that long ago that I found myself watching Archer more out of loyalty and a sense of commitment than because of its inherent quality. Like many of its fans I’d grown to love the series in the first place for its trademark espionage antics and quick-witted zingers. Times had changed. Season 11, however, represents the first batch of post-coma episodes, and they nailed my expectations for a return to normalcy with simple storylines coupled with surprisingly interesting character growth. The season finale doesn’t quite land the helipad as it should have, but it certainly has me eager to see what’s next.

It should go without saying, but SPOILERS for the Season 11 finale and all the great episodes before it. Archer isn’t a show that relies on big plot points to nail jokes or move characters along, but the show does have a tradition of setting up cool and interesting scenarios for the next season, something this finale does to moderate success.

Season 11 gives us a look at our very capable but very inappropriate cast of characters once they’ve had Archer himself ripped out of their lives. All season we’ve been watching these now “reformed” characters return to their former messy selves, culminating in the awesome rescue mission of Archer and Lana’s daughter in the penultimate episode. It begged the question of why we needed an additional episode to wrap things up, and until about the last five minutes, this stayed true throughout the majority of the season finale.

The episode begins in proper Archer fashion as Malory gives a briefing of the mission while Cyril manages to find his face planted to the floor once again. A murder at an Antarctic compound spurs a murder mystery that brings the entire agency on board, including usual stowaways Pam and Cheryl. A few interrogations later, along with a quick game of strip solitaire with Pam (of course), a second character kicks the bucket. It’s quickly revealed that a hydrogen bomb is in the mix and a plot to blast the ice caps to flood the planet is in the works. Some quick thinking involving pickle juice and your classic Archer bravery brings the bad guys, and that pesky helicopter, down and stops sea levels from rising to massive heights. End credits. 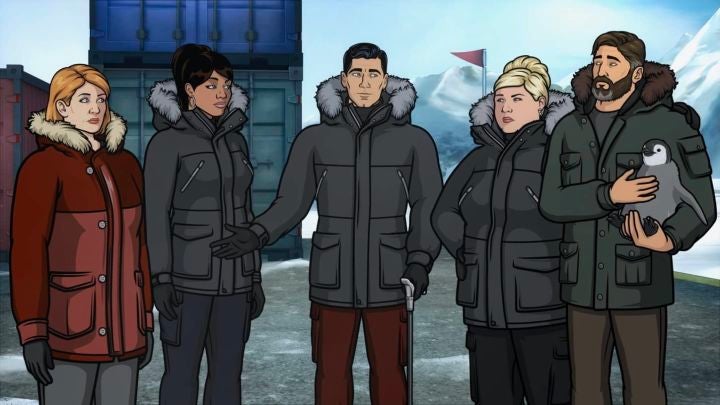 It’s a perfectly serviceable Archer episode, but for most of its run-time it’s also hard to believe this is a season finale. The episode is not here to tie up storylines. It’s not here to push characters to advance or even complete character arcs set up right when Archer returned from his three year coma. It’s a fun whodunnit that gives our characters one more chance to behave inappropriately and throw out ridiculous one-liners. That is, until the last five minutes. Suddenly there’s characters reflecting on how they’ve changed over the last eight episodes and we even get quick glimpses of Archer’s coma season characters flashing before his eyes. I loved this portion but it felt like the episode only realized it was a season ender in the last few scenes.

Even so, the ending taps into some strong themes. There’s Archer as a terrible person. Hilarious, yes, but also narcissistic and incredibly selfish. We know that, the characters know that, and for the first time in his life, Archer begins to truly know that too. More than that, since his first days out of his coma, in which it was clear his friends had infinitely improved and became better versions of themselves in his absence, Archer has had to accept that he’s a terrible influence on his pals. And by the end, he was just a margin away from admitting it out loud.

All that seems perfectly true until Archer’s massive truth bomb shortly after being berated for his irresponsible yet heroic bombing of the submarine. Everyone is using Archer as an “excuse to be your worst self” as Archer so eloquently put it. Even Lana couldn’t refute this revelation and it’s absolutely true. These people are animals. They get the job done but they’re wild to the core and they’ve been itching to get back to their natural dispositions. Archer waking from his coma is all they needed to revert back. I love that Season 11’s message is ultimately that Archer is to not be blamed for everyone’s problems and that they’ve convinced themselves otherwise.

Now onto the coma sighting shenanigans! Is Archer still in a coma? Probably not! Is it possible Archer hasn’t fully recovered from his three year slumber? Sure, why not! Were these just cool Easter Eggs to give us a chance to see the space crew and Crackers the parrot again? I’d say no. In Season 10 when Archer was constantly seeing flashes of his actual non-coma life, that built up to something. While this is on a much smaller scale, these wouldn’t be included unless there’s something not quite right with either Archer’s awakening or current reality. It would be a shame to erase what Season 11 built up so I expect some funky coma character interjections next season but nothing that makes it feel like we deleted an entire season. Krieger, your time is here!

Isn’t it great to know Archer will be back for a Season 12? Not just because Archer is once again consistently funny and back to its humble roots, but because we have a number of loose ends to catch up on. What happened with the incredibly powerful exo-suit from the third episode? Archer is friends with Barry now? That can’t last! And we definitely don’t expect Lana and Robert to stay together, right? If anything, Archer has a lot of work ahead of him regarding his daughter AJ so it’s no time to stop the Archer train yet.

Archer is best when it delivers genuine laughs without going out of its way to produce a wild plot to shake things up. Maybe the noir detective season or the pirate focused pocket of episodes is what I needed to appreciate the spy aspects of Archer again. Either way, Season 11 is a return to form that I hope continues the next time the world’s best spy pops up on our screens.

Michael Koczwara is a writer who is ready for the permanent return of phrasing. Follow him on Twitter and Twitch.

Source: IGN.com Archer Season 11 Finale: Post-Coma Antics and What to Expect in Season 12