Kang the Conqueror Explained: Who Is the Rumored Villain of Ant-Man 3?

Marvel Studios is quietly developing a follow-up to 2018’s Ant-Man and the Wasp. And while details are scarce about Ant-Man 3, Deadline reports Lovecraft Country star Jonathan Majors has been cast in a major villain role. According to their sources, that character is none other than Kang the Conqueror.

That’s right, one of the most iconic Avengers villains ever may be joining the MCU, but not in an Avengers movie. Not yet, anyway. If you’re not familiar with Kang or why he has the potential to be the next Thanos-level threat to the MCU, we’re here to shed light on this powerful villain. These are the topics we’ll be covering here:

Who Is Kang the Conqueror?

It’s not easy recapping the convoluted history of Kang the Conqueror. He’s a villain who’s gone by many names and many different motivations in his countless clashes with the Avengers and Fantastic Four. But through it all the basics have stayed the same. Kang is a man who sees himself as the rightful master of the world. Using the power of time travel and the most sophisticated weaponry his future world has to offer, Kang has repeatedly sought to rewrite history to his own whims and ensure his own rise to power.

Kang’s love of time travel is exactly what makes him such a dangerous and seemingly never-ending thorn in humanity’s side. No matter how often he’s defeated, banished or even destroyed utterly, some version of him is always out there, waiting and plotting.

While the first appearance of Kang the Conqueror is featured in 1964’s The Avengers #8, the character technically debuted a year earlier in Fantastic Four #19. We’ll try to summarize Kang’s confusing origin story as simply as possible.

Kang’s real name is Nathaniel Richards. Originally a historical scholar from the 31st century (and possibly a distant descendant of either Reed Richards or Victor von Doom), Nathaniel discovers Doctor Doom’s ancient time travel tech and uses it to travel back to the era of ancient Egypt. Crowning himself “Rama-Tut,” he lords over his new subjects and uses his futuristic tech to make himself seem like a god. That is, until the Fantastic Four show up to end his reign.

After escaping to the 20th century, Rama-Tut meets Doctor Doom and uses Doom’s distinctive armor as inspiration for his next supervillain identity, the Scarlet Centurion. However, he’s again defeated by Earth’s heroes and attempts to return to his own timeline.

This is where Kang the Conqueror is born. Richards accidentally travels forward too far in time, arriving in an era when human civilization has collapsed. As the only person left who understands the advanced but forgotten technology of the 40th century, the newly minted Kang is able to quickly conquer his new timeline and even extend his new empire beyond Earth’s borders. Not content to be ruler of a futuristic empire, Kang begins a recurring game of toying with time and attempting to rewrite history to suit his own whims.

As an ordinary human from the 31st century, Kang has no innate superhuman powers. However, he’s a gifted physicist and historian, using his knowledge of science and history to manipulate the timeline and accumulate power. His distinctive green and purple suit of armor (inspired by Doom’s own armor) both enhances Kang’s strength and allows him to survive in whatever inhospitable environments he may find. Kang has a time-ship that allows him to freely travel through the time-stream, and he’s also assembled a vast army comprised of the best warriors from throughout history.

Kang also sometimes wields a ray gun that can sap a person’s strength and willpower, along with various doomsday weapons only a 40th century tyrant could dream of.

Kang also seems to be functionally immortal. Because he’s so fond of abusing the timeline for his own selfish ends, there are countless variations of Nathaniel Richards in existence. No matter how many times Kang is defeated, there’s always another incarnation of the Conqueror ready to continue his crusade. 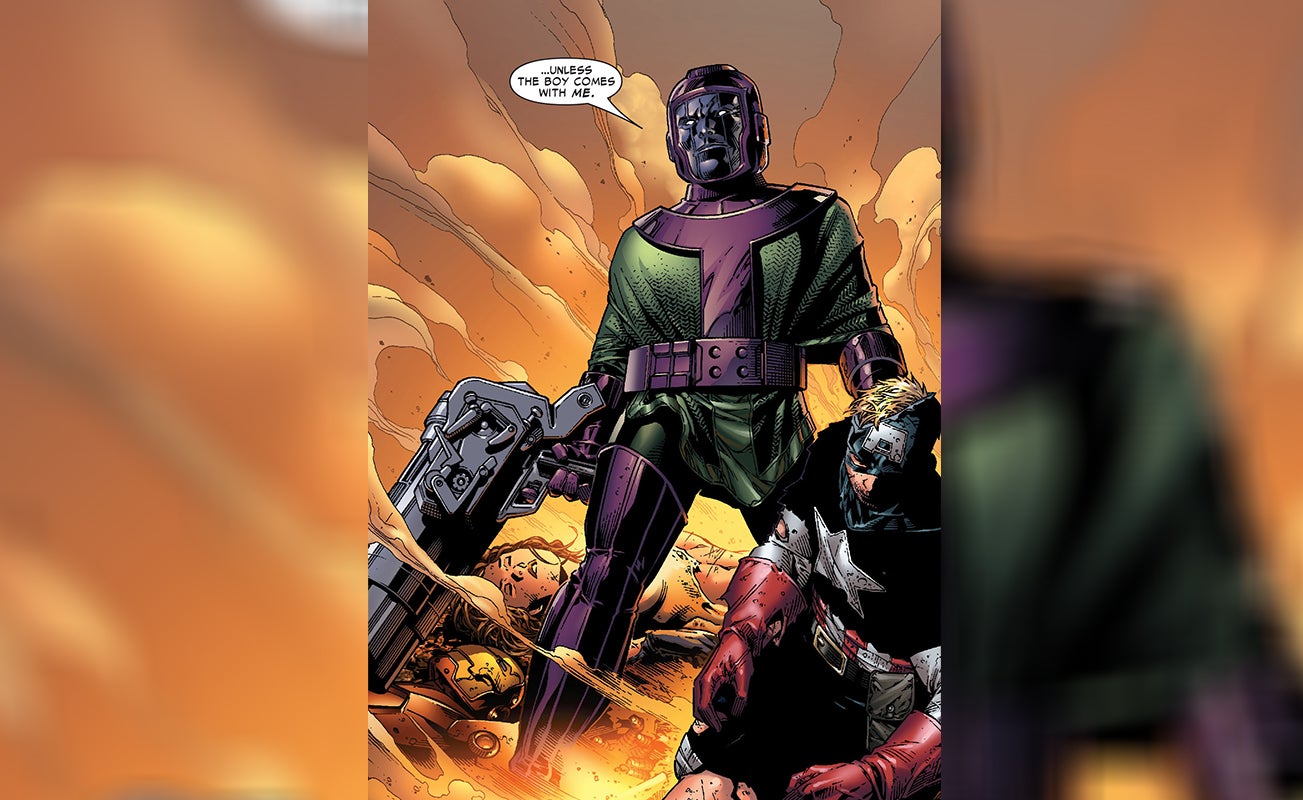 Kang is every bit as convoluted a character as one would expect from a man whose favorite hobby is manipulating time. But part of what makes Kang such a confusing character is that he’s had so many different names and identities over the years. It doesn’t help that these various characters weren’t all originally conceived as being the same person, so a lot of these connections have been forged after the fact. If you’re familiar with the comic book storytelling term “retcon,” Kang is basically its living embodiment.

As we’ve already covered, Nathaniel Richards uses names like Rama-Tut and the Scarlet Centurion early on in his career as a time-travelling tyrant. But taking up the mantle of Kang isn’t his last identity shake-up.

At some point in his long life, Kang gives up his name and his empire to instead forge an alliance with an advanced alien race known as the Time-Keepers. In exchange for true immortality, Kang agrees to preserve the timeline and ensure the Time-Keepers’ rise to power. At that point he becomes Immortus. Ironically, his younger selves are responsible for much of the damage Immortus is tasked with undoing.

Kang has held other cover identities while masquerading as a 21st century human, including a small-town mayor named Victor Timely and a business tycoon named Mr. Gryphon.

If all this isn’t complicated enough, thanks to time travel these various incarnations of Kang basically coexist alongside each other and sometimes collude or wage war against one another. There’s even an entire team of Kangs known as the Council of Cross-Time Kangs. Picture the Citadel of Ricks in Rick and Morty, but with less alcohol and self-loathing.

Kang and the Young Avengers

There’s another notable incarnation of Kang who may well factor into the MCU at some point. The 2005 series Young Avengers introduces a team of teen heroes modeled after classic Avengers but with very different backgrounds and origin stories. The team’s founder, Iron Lad, isn’t a descendant of Tony Stark, but is actually a teen version of Nathaniel Richards from a splinter timeline. Kang attempted to travel back in time and rescue his younger self from a group of bullies who had left him hospitalized for months. Kang saves himself and gives the young Nathaniel an advanced suit of armor in the hope of hurrying along his transformation from ordinary man to Kang. But instead, young Nathaniel is horrified by his older self and travels back in time to form a new team of Avengers.

Ultimately, this version of Kang is killed and Iron Lad is forced to wipe his own memories and return to the future, restoring the proper timeline. But he leaves behind a copy of his consciousness inside his armor, which fuses with the broken remnants of Vision to form a new version of that iconic Avenger.

Iron Lad is an important Kang offshoot to know, given that Marvel is showing every sign of introducing the Young Avengers in the MCU. We’ve already met Scott Lang’s daughter Cassie, who eventually becomes the size-changing Stature, and the upcoming Hawkeye series on Disney+ will introduce Kate Bishop. At this point, it seems only a matter of time before we meet other teen heroes like Wiccan, Hulking and Patriot so that the Young Avengers can finally assemble on the big screen.

We’ve speculated that Kang may well become the MCU’s next Thanos-level villain. Though he’s making his debut in Ant-Man 3 of all movies, Kang’s love of time travel and perpetual habit of returning to threaten the Avengers all over again make him perfectly suited to become a recurring antagonist across the MCU. It doesn’t hurt that he has deep connections to so many different Marvel characters and teams.

As mentioned before, Kang may well be a descendant of Mister Fantastic or Doctor Doom. Both characters have certainly played a key role in his development as a villain. He also has connections to major characters on the cosmic side of the MCU. In the comics, Kang once competed with the Grandmaster for a chance at godlike power, and he attempted to claim the so-called “Celestial Madonna” (better known as Mantis) as his bride.

Decades after it was originally published, Marvel added more layers to the events of Fantastic Four #19 by revealing Nathaniel’s true motivations for travelling back in time and becoming Rama-Tut. He was actually seeking out a young En Sabah Nur, the mutant destined to become Apocalypse, to crown him as his heir. He never succeeded, though Apocalypse turned out to be a chip off the old block in terms of harnessing futuristic technology and seeking to dominate the world.

With Kang now firmly linked to the Fantastic Four, Avengers and X-Men, Marvel forged yet another connection in the 2015 series Uncanny Inhumans. There, Black Bolt gives his son Ahura to be fostered by Kang, seeing the time travelling tyrant as the only safe haven in a world growing steadily more hostile toward the Inhumans.

Kang in TV and Games

According to Deadline, Kang will finally make his live-action debut in Ant-Man 3, with Lovecraft Country star Jonathan Majors tapped to play the character. We can only assume this will be the first of several MCU appearances for Majors.

Jesse is a mild-mannered staff writer for IGN. Allow him to lend a machete to your intellectual thicket by following @jschedeen on Twitter.

Source: IGN.com Kang the Conqueror Explained: Who Is the Rumored Villain of Ant-Man 3?