While the news that Marvel’s Spider-Man: Miles Morales coming to PS5 for the 2020 holiday season was one of the highlights of Sony’s reveal event, precious little information about the game was actually revealed. That’s why it’s notable for Phil Lord — best known to Spidey fans as the man behind the story of 2018’s Oscar-winning animated film Spider-Man: Into the Spider-Verse featuring Miles Morales — to reveal that he’s one of few people who have actually seen the game.

Lord retweeted the reveal trailer for the upcoming game, writing, “We got a chance last year to check out what the insomniacs are up to and… it’s special. They’re special.” 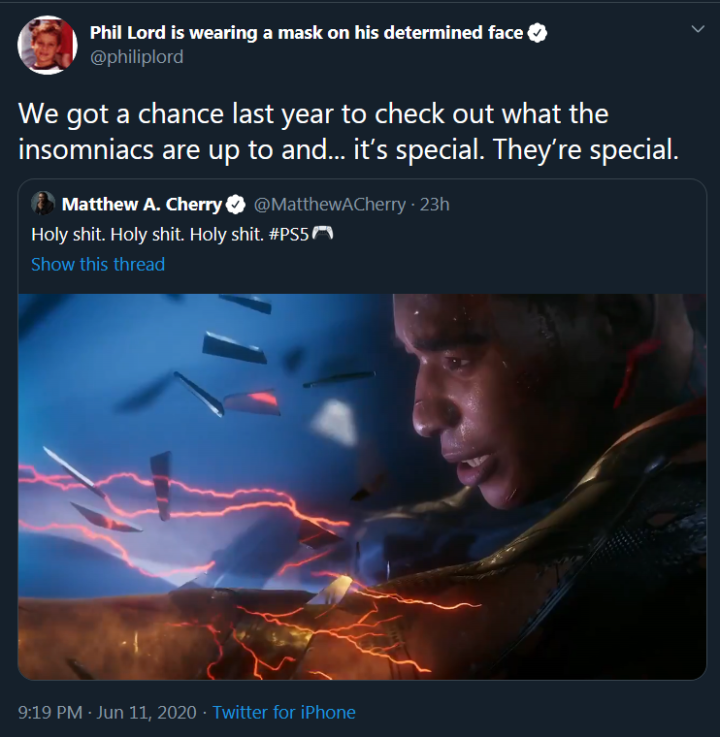 It certainly sounds as though Lord liked what he saw, and he was impressed with the people making it. By “insomniacs” Lord is of course referring to the developers at Insomniac Games who gave us 2018’s Marvel’s Spider-Man for PS4 and are now working on the followup. Lord knows what it takes to capture the essence of Miles and faithfully adapt him from the comics to another medium, so if he approves of the game, then Insomniac must be doing a good job.

It sounds like Lord wasn’t alone when he saw the game, so we’d hazard a guess that he saw it with some of his fellow Spider-Verse filmmakers, including his longtime collaborator Chris Miller.

Lord is currently working on Spider-Man: Into the Spider-Verse 2, which was announced last year with a release date of April 8, 2022 but was later delayed until October 7, 2022.

Some confusion arose as to whether Spider-Man: Miles Morales was an expansion of the first game or not, but Sony has since clarified that it is a smaller standalone game.

You can re-watch the amazing, spectacular reveal trailer below:

Joshua is Senior Editor and Producer at IGN. If Pokemon, Green Lantern, or Game of Thrones are frequently used words in your vocabulary, you’ll want to follow him on Twitter @JoshuaYehl and IGN.