Josh Trank, who directed 2015’s notorious Fantastic Four reboot, has gone on the record as saying that he is not interested in any “Trank Cut” of the film being released.

The so-called “Trank Cut” is obviously a reference to The Snyder Cut of Justice League. It was announced last week that Zack Snyder’s version of that film will be finished and released on HBO Max in 2021.

As CBR points out, a fan on Twitter suggested the idea to Trank of a director’s cut of his Fantastic Four, but the filmmaker replied “No need.” He then followed up with a retweet of CBR’s story, saying rather cheekily, “Yeah… No trank you.” 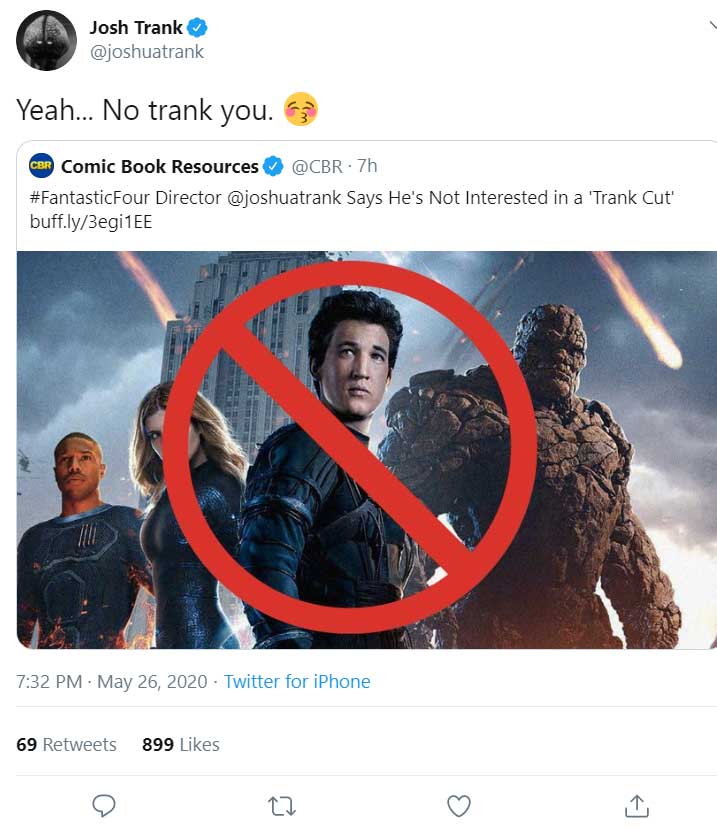 Trank’s most recent film, the Tom Hardy drama Capone, was just released. He’s acknowledged the problems he had on Fantastic Four. “What I tried to do with Fantastic Four was so arrogant for somebody who hadn’t really gotten the handle of his own skill set as a filmmaker to do that kind of stuff with it,” he told The Hollywood Reporter. He had some fun with a review of the film on Letterbox last fall, saying he was in a “heavily f**king traumatized state of mind” just two weeks before the movie was set to release. In that review, he even asked “Is there a #releasethetrankcut?” before adding that it “doesn’t matter.”

The full story of what happened with Fantastic Four has never been revealed, but after the movie was released, actor Toby Kebbell (who played Doom in it) said that Trank “cut a great film that you’ll never see. That is a shame. A much darker version, and you’ll never see it.” Trank also tweeted a similar sentiment when the film was first released, saying “A year ago I had a fantastic version of this. And it would’ve received great reviews. You’ll probably never see it. That’s reality though.”

What do you think? Should a Trank Cut see the light of day? Let’s discuss in the comments!