After watching Star Wars: The Rise of Skywalker, you may have walked away with more than a few questions about everyone’s favorite sequel trilogy X-Wing pilot, Poe Dameron. It turns out that the hotshot hero wasn’t always so heroic. There was a time in his youth when he illegally smuggled spice with Zorii Bliss and the Spice Runners of Kijimi. So how did he go from a life of crime to one of valiant purpose?

That’s what the new Star Wars novel titled Poe Dameron: Free Fall, by Alex Segura (Archie, Silent City), is set to explore. IGN is excited to exclusively debut the first chapter of the book for you to read before its release on August 4. Check out our interview with Segura for some insight on the novel, then you can find the Chapter 1 excerpt at the end of this article. 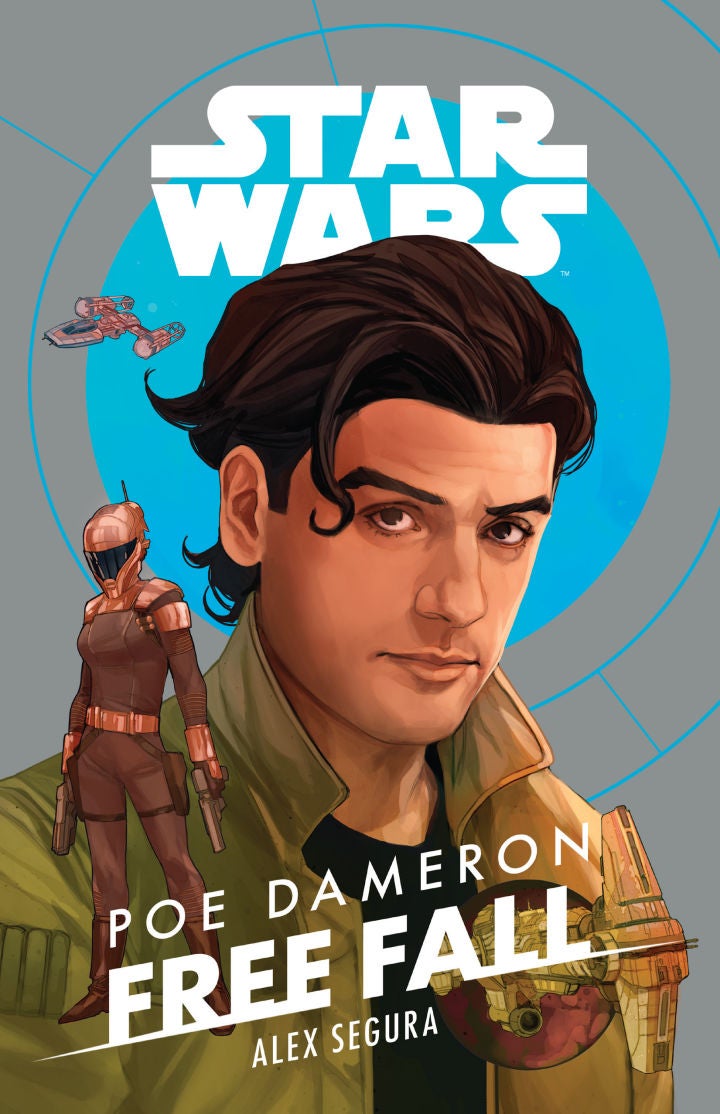 Getting to Know Poe with Alex Segura

“I hope readers will feel like this book serves as an exciting, character-driven follow-up to The Rise of Skywalker – in that it answers a number of Poe questions they probably have after watching the film,” Segura told IGN in an email interview.

For Segura, the character of Poe Dameron was especially interesting because his morality finds itself to be a bit more on the flexible side.

“I love the complexities of the character – he’s charming, a bit of a scoundrel, not afraid to bend the rules – but he’s also driven by loyalty and legacy, and friendship. He’s a hero, but in a world where there is absolute good and absolute evil, Poe is a bit gray,” Segura explained. “Characters like that really appeal to me as a writer, because we get to experience their struggles on the page and it creates a lot of compelling moments.”

Free Fall reveals what gets Poe off his homeworld of Yavin IV and sets him on the path to becoming the Resistance fighter seen in the films. We’ll meet a Poe still in his teens and the novel will cover the bulk of his time with the Spice Runners of Kijimi. You can, of course, expect to see Zorii Bliss and Babu Frik, but also many new faces from Poe’s past.

Those who read the Marvel Comics mini-series Star Wars: Shattered Empire will have already met Poe’s parents, A-Wing pilot Shara Bey and soldier Kes Dameron of the Rebel Alliance. They play a key role in the book, even though one of them has already passed on when it begins.

“Poe’s parents are ever-present, even though by the time the novel starts, Shara Bey has died. But the weight of her memory, and the weight of his father Kes Dameron’s expectations are always there,” Segura shared. “Poe feels a lot of responsibility – to his parents’ legacy, mainly – and that doesn’t always mix well with his own youthful curiosity and desire for adventure. It’s the core of Poe’s conflict, as he leaves home and sets out on this big adventure – he has to basically see everything through the prism of what his parents would want him to do, and I feel like that’s a really universal idea – that we’re often trying to square the things with do with the idea of what’s expected of us, and we eventually learn that we have to create our own set of rules while still honoring what came before. Even though they’re ‘on camera’ for only part of the novel, the influence they have over Poe and how he reacts to things is immeasurable.”

And what about Poe’s trusted friend and ally, BB-8?

“I don’t want to give anything away, but there is definitely an echo of this relationship, and I think readers will get a kick out of it,” Segura teased.

The scream erupted from Poe Dameron’s lips as the A-wing veered upward with a long, painful shudder, the old ship barely dodging the trio of Civilian Defense Force vessels careening toward it.

“Not good, Poe, not good,” he muttered to himself as he checked his ship’s display. Four ships total. All armed. All probably angry. All in better shape than his mother’s old bird. Not great odds.

“What else is new?” he asked, a smirk forming on his face.

This was supposed to be fun, he told himself—just a quick jaunt to blow off some steam. But he’d gone farther— higher—than he’d intended, and by the time he noticed, he was in someone else’s crosshairs.

A crackle of sound signaled a message from his pursuers. Poe ignored it. The man’s gruff voice cut through anyway.

“Poe, this is your last warning, son,” said Griffus Pinter, one of his father’s closest friends and a mainstay of the Yavin system’s Defense Force. Poe could visualize the older man’s expression, the scraggly gray beard quivering slightly with each rage-fueled word. “I don’t want to have to shoot you down.”

Poe hesitated for a second, his hand hovering over the ship’s controls. Even at sixteen, Poe was mature enough to know a turning point when he reached one. He could give up, surrender—and maybe skate by. Get another slap on the wrist. He’d face his father’s wrath again, sure, but even those cold shoulders were finite. It would be another incident in a long line of rebellious incidents for Poe since, well, since eight years prior.

Since the darkest day of his young life.

The A-wing turned downward, as if heading toward the moon, the sudden move putting a strain on the old ship—as evidenced by sounds Poe had never heard it make. Griffus sounded equally aghast. The expletives jumping through the comm were almost musical—a collection of words Poe could’ve hardly imagined in his most creative moments.

It had started as a lark. A lark fueled by anger, if Poe was being honest with himself. The argument with his father had hit the same notes as many earlier ones. The slightest suggestion of Poe becoming a pilot—of leaving Yavin 4 and following in the footsteps of his mother, Shara Bey—was met with an immediate rejection. A spark of emotion Poe only saw in his father in moments like that one. The rest of the time, Kes Dameron was sullen, isolated, and distant. This time, harsh words were exchanged. Poe was reminded of his inexperience and youth. Tears. Yelling. Shut doors and a growing canyon between the two Dameron men.

Slipping into the A-wing had been a quick escape. A place to hide and think. The smell and feel of his mother’s ship served as a last sanctuary of her memory. A final place where Poe could commune with a woman who should still be around. Should still be at home when he’d storm in late, waiting with a hot cup of Tarine tea in her work-worn hands, a comforting smile on her face.

“Do we need to talk, Poe?” she’d ask in those imaginary moments, in those scenes that still felt all too real. Hurt all too much.

Before he knew it, though, he had been flipping switches and taking the ship out. In that moment, Poe’s mind had drifted back—to the same cockpit, the same A-wing, eight years before—to his mother, her hand over his, guiding him. They used to take it out from time to time. She wanted Poe to learn, she’d tell Poe’s father, Kes, when he protested. Who better to teach him? The ship had flipped into a barrel roll, their heads bumping into each other as she laughed—that clear, strong laugh. Confident and warm—like everything his mother did. Poe knew, even then, Shara Bey was a hero. Maybe he didn’t know she was a hero to the Rebellion, to the forces that would come together to create the New Republic, but she was a hero to him. A light he was always drawn to, a source he drew strength from.

And she was gone.

His mind was yanked back to the present, Griffus’s static-fueled screaming replaced by a clearer voice. Menacing. Unfamiliar.

The sentence was brief, but its message was very, very clear.

The first two were warning shots. Poe, despite his inexperience when it came to space battles, knew enough. “You tell them what you’re doing, every step,” his mother had said. “If you want the conflict to deescalate, you have to give them every chance to do it for you.”

But that third shot came in strong, knocking the A-wing for a loop. The ship began to spin, and the controls flickered.

“No, dammit, no,” another voice said. “Change course, immediately. We have to retrieve—”

Then the feed went dead. An eerie silence permeated the A-wing’s tight quarters, replacing the clatter. Poe’s skin grew cold as he tried to regain some kind of equilibrium.

The Defense Force officer’s voice had been nervous. Someone had overreached. Fired with the wrong intent. The hiss of air—a compartment breached, something gone awry—filled Poe’s ears as his head slammed back, a loud thunk following a split second after. The spins couldn’t be counted anymore—it was a constant rotation as the ship veered downward, the control display a muted gray.

Poe tried to keep his eyes open. Tried to focus on what he could do. The ship wasn’t dead—couldn’t be. It was his mother’s ship. Had been her faithful partner for more rebel missions than Poe could imagine. Shara Bey of the Rebellion. Hero of the Battle of Endor. Friend to Princess Leia Organa and Jedi Knight Luke Skywalker.

As the pressure increased, as the ship fell apart around him, Poe’s mind drifted to the farm. His eyes rolled back in their sockets, his mind overwhelmed with the vertigo as the shaky A-wing gained speed, propelling into the Yavin moon’s atmosphere. He was going home.