With digital comics platform ComiXology offering a 60-day free trial period for its ComiXology Unlimited monthly subscription service, we’re here to point out the best comics worth reading from the 25,000+ titles available. This article is focusing on DC’s very own Emerald Warrior, the Green Lantern, so we’ll be pointing out the best comics and graphic novels about the heroes of the Green Lantern Corps.

Most of the Green Lantern comics available on ComiXology Unlimited come from the long-running, critically acclaimed run by writer Geoff Johns. While the entire run isn’t available on the service, there are still some story arcs worth checking out, so we’ll give you the context you need to hop right in.

But if you’re looking for something a little different that falls outside of Johns’ run, then worry not, because there are some other excellent Green Lantern comics you should definitely read.

You can view our list as a slideshow by flipping through the gallery below, or keep scrolling to read it as an article. 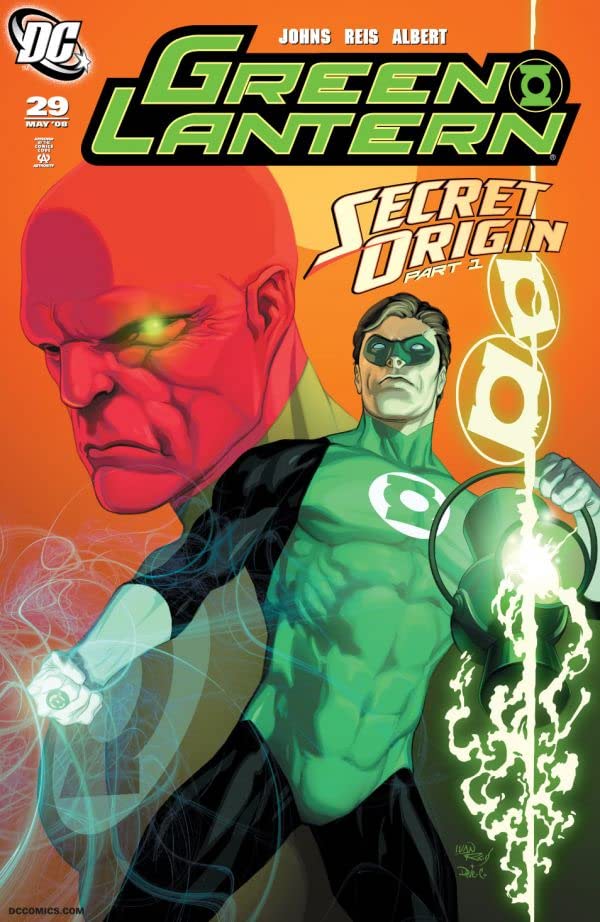 If you are just getting into Green Lantern, then this is the comic for you. Secret Origin tells the definitive origin story for the modern Green Lantern franchise. It tells the familiar story of how Hal Jordan received the Green Lantern ring and his training with verteran Green Lantern Sinestro, but it also weaves in other characters and concepts that will become more important down the line. 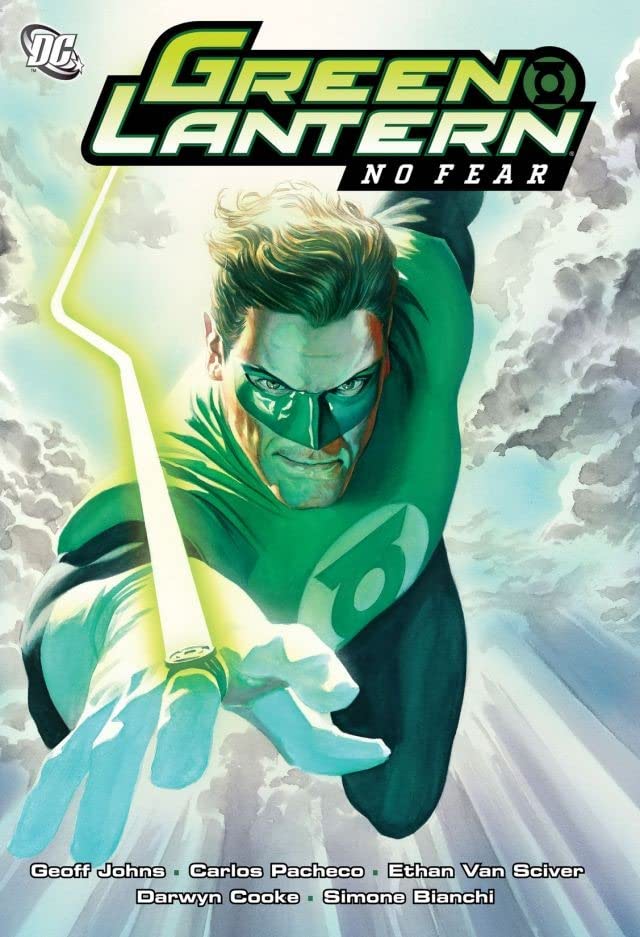 So you already know the basics of Green Lantern and want to jump right into the adventure? Then No Fear is the place to start. It’s the proper beginning to Geoff John’s epic run, and it starts small by showing Hal Jordan returning to his home of Coast City and taking up the duties of the Green Lantern once more. Many Green Lantern stories take place among the stars, but this one grounds everything on Earth, giving you a look at Hal Jordan’s civilian life and pitting him against some rather brutal Earthbound foes.

This story can be read in Green Lantern: No Fear, which collects Green Lantern #1-6 and Green Lantern: Secret Files #1. If you like it, you can keep reading the next six issues (#7-12) on ComiXology Unlimited. 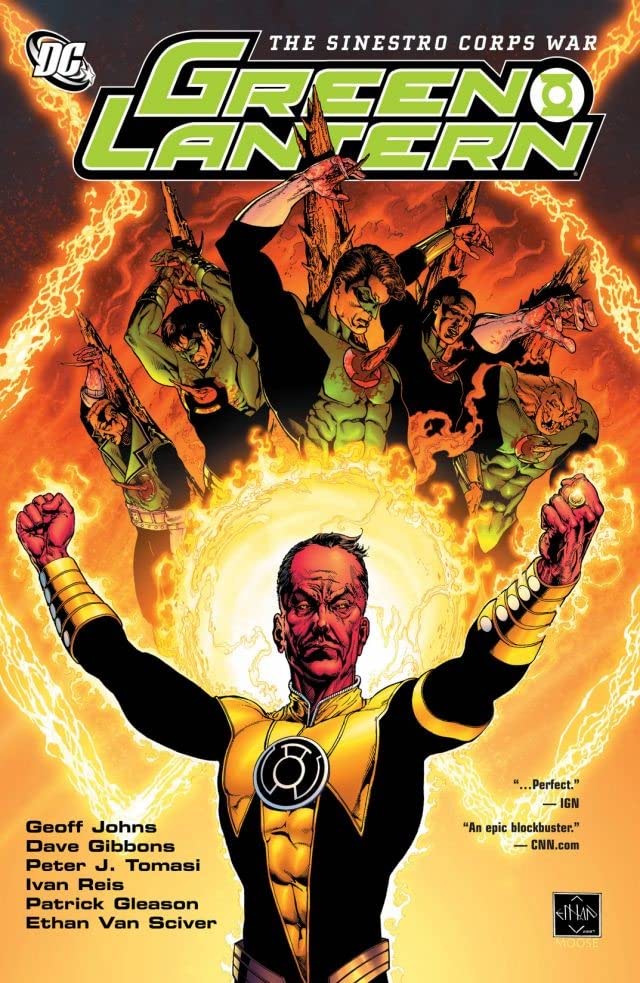 The Sinestro Corps War is like the Empire Strikes Back of Geoff Johns’ Green Lantern saga in that it’s the middle chapter of a grand cosmic epic and it’d widely considered to be the best story arc of the modern Green Lantern era. Hal Jordan’s mentor-turned-enemy Sinestro has started his own Corps of Yellow Lanterns and recruited some of the most fearsome and powerful baddies in the entire DC Universe to help him destroy the Green Lanterns and rule the galaxy through fear. It’s a thrilling cosmic war story that expands on the mythology of the rings while testing its large cast of heroes like never before. 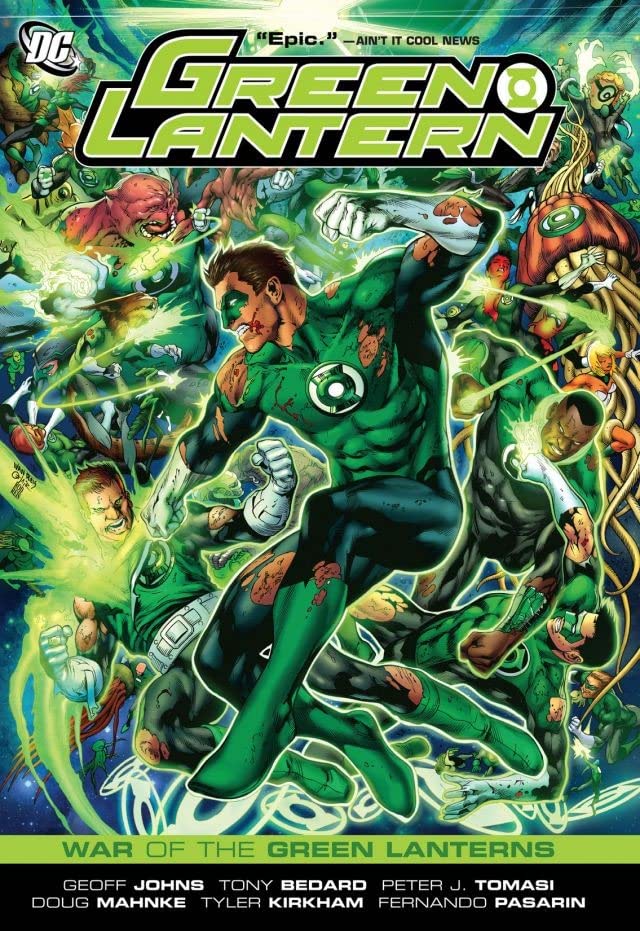 Green Lanterns sure do love to get into wars, don’t they? This story sees a mysterious force taint the power of the Green Lanterns and cause the Green Lanterns to turn on each other, sparking a war between a small squad of Earth-based Lanterns and the rest of the Corps. With the Green Lantern power no longer safe to use, this is the story where we finally get to see each Earth Lantern wear a new ring from a different color on the Emotional Spectrum, which shows a different side to Hal Jordan, Guy Gardner, Kyle Rayner, and John Stewart that we haven’t seen before.

Learn About the Emotional Spectrum

If you want to read more of Geoff Johns’ Green Lantern run in order to learn all about the different colored powers of the Emotional Spectrum, there are even more story arcs that are available to read in single issue form. Note that these stories take place after the Sinestro Corps War and before the War of the Green Lanterns. 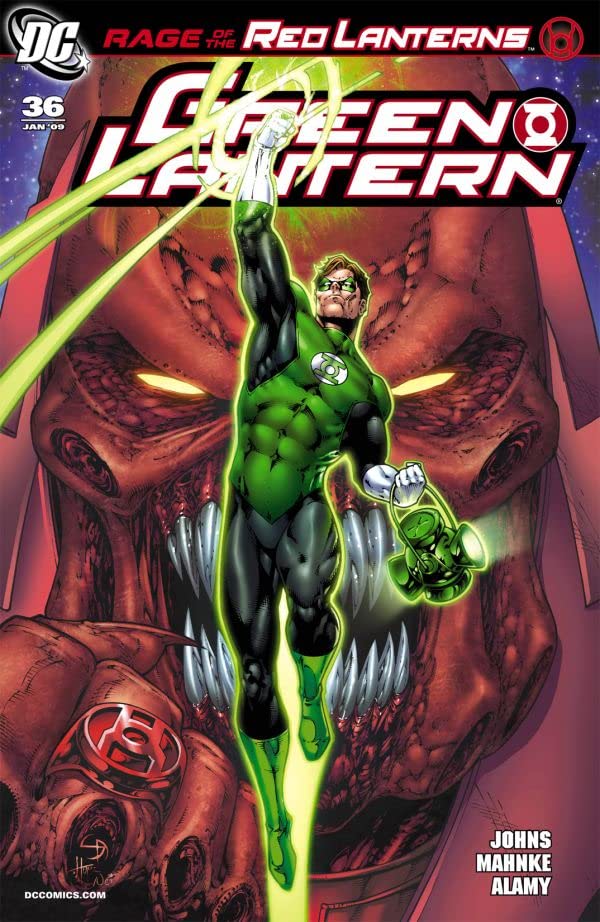 The fan-favorite Red Lanterns are consumed by hatred, making them one of the deadliest and most volatile threats in the Green Lantern mythos. So naturally we get to see what happens when Hal Jordan gets infected and transforms into one of them. 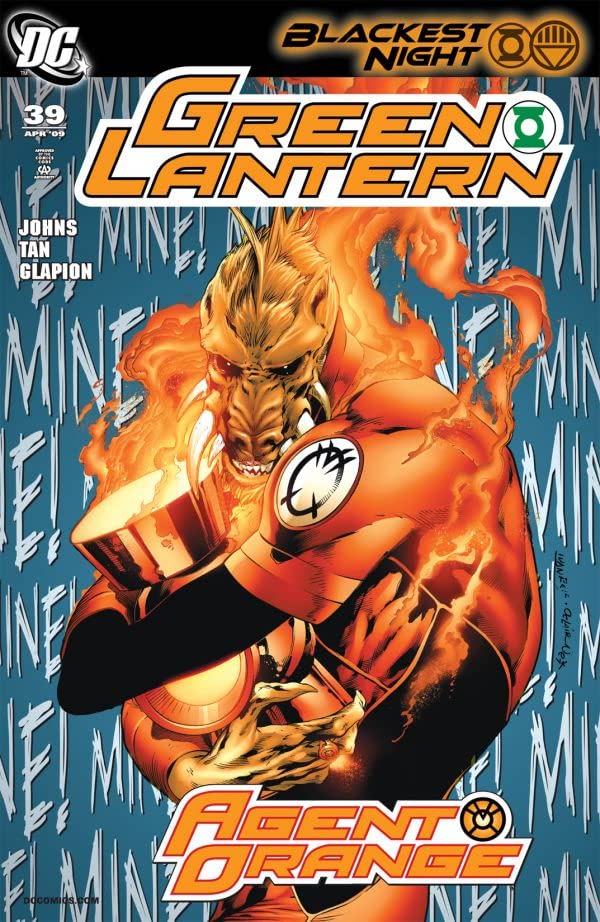 The new colors of the Emotional Spectrum keep popping up as we meet the one and only Orange Lantern known as Larfleeze. He is unique as he is powerful, and his personality proves to be one of the more interesting and silly in recent memory. 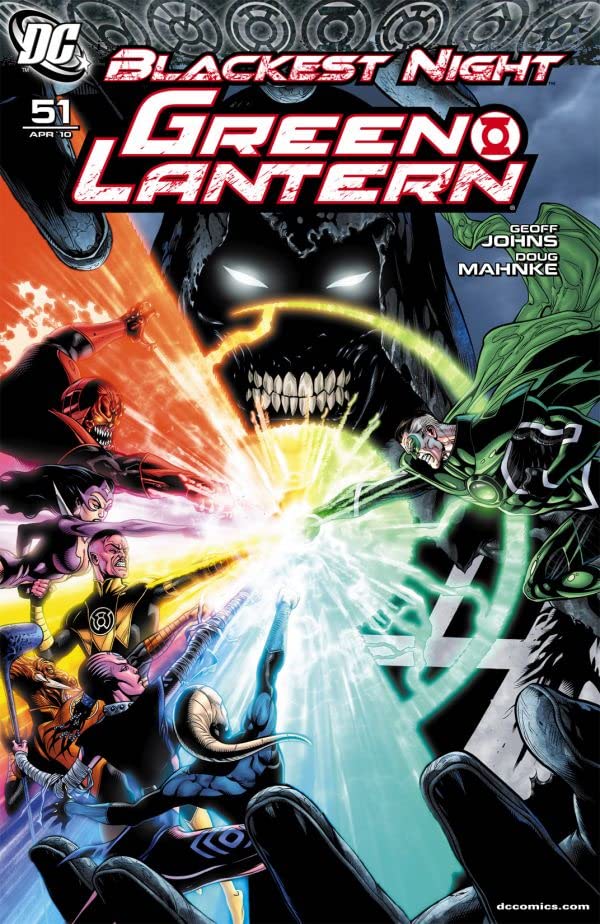 This is where everything concerning the different colored Lanterns comes to a head. These issues tie into the main Blackest Night event comic (not available on ComiXology Unlimited) and show what’s going on in between the big beats of the main story. Still, it’s full of revelatory character work and plenty of disgusting Black Lantern zombie action, so it’s definitely worth a read. 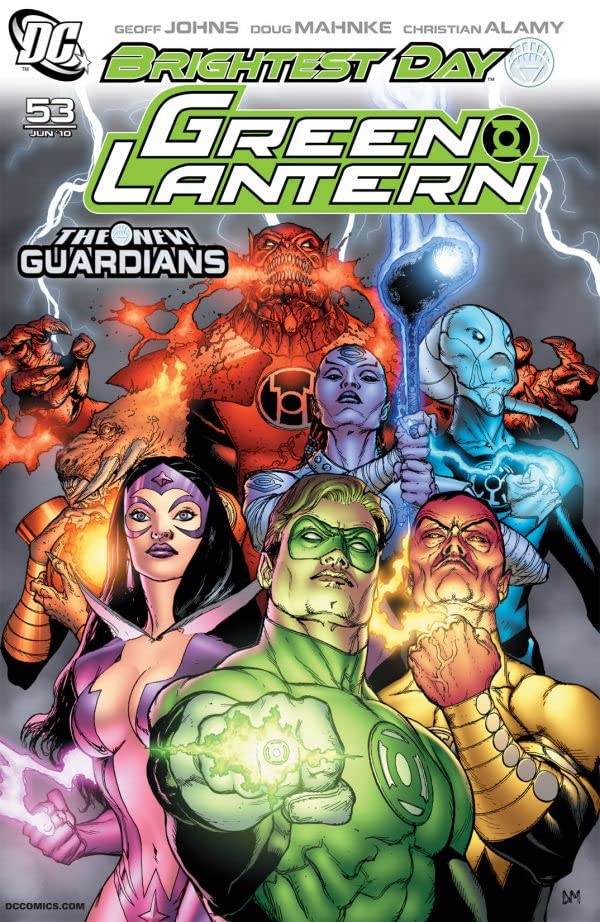 On the other side of Blackest Night is none other than Brightest Day. But don’t confuse this with the actual Brightest Day series by Geoff Johns that explores how the larger DC Universe reacts to the events of Blackest Night (also not available on ComiXology Unlimited). This story that takes place in the main Green Lantern series shows how the Lanterns respond to it. Whereas the different colored Lanterns were largely opposed to one another before, the leaders of each faction must now find a way to work together to bring about a better future for all of them.

Looking for something outside that Green Lantern run? You’re in luck. Green Lanterns is a fresh approach to the franchise that follows two rookie Green Lanterns, Jessica Cruz and Simon Baz, as they battle their personal demons while trying to figure out how to be interstellar space cops. It’s an incredibly heartfelt, human, and humorous run that nevertheless challenges its heroes with next-level threats they have no business dealing with.

Curiously, all five volumes of Green Lanterns are on ComiXology Unlimited except for Volume 2, for reasons we do not know. 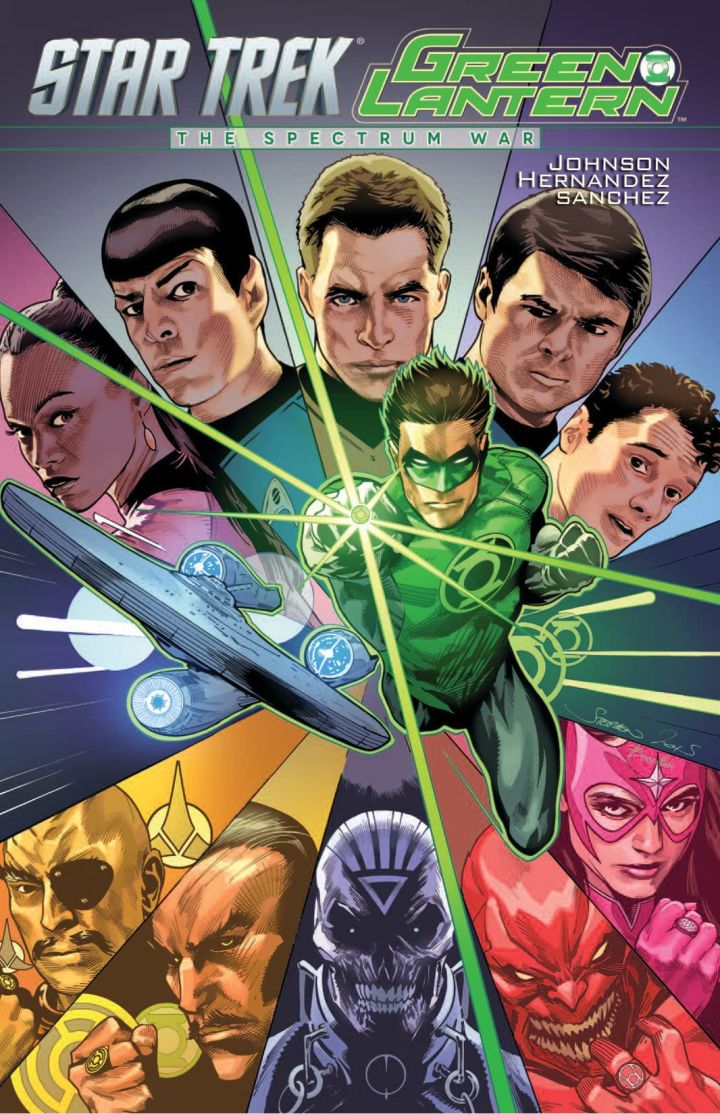 This charming Star Trek/Green Lantern story is a light-hearted piece of popcorn fun. The iconic heroes and villains from both franchises clash and we get to enjoy the show as the sparks fly. The best part about Star Trek/Green Lantern is how they explore each other’s sci-fi elements and bring them together in the most ridiculous-yet-fun ways possible.

For info on how to use ComiXology, check out how to download ComiXology comics to every device. Want even more out of your ComiXology Unlimited subscription? Check out this list of the best bingeable comics available on the service: