Nintendo has announced that Super Smash Bros. Ultimate game director Masahiro Sakurai will be unveiling and giving an in-depth look at a new DLC fighter on Thursday, January 16, 2020, at 6am PT/9am ET/2pm GMT.

Nintendo promises roughly 35-minutes of footage for this mysterious new character which, if Nintendo keeps to its original promise, will be released by February 2020. 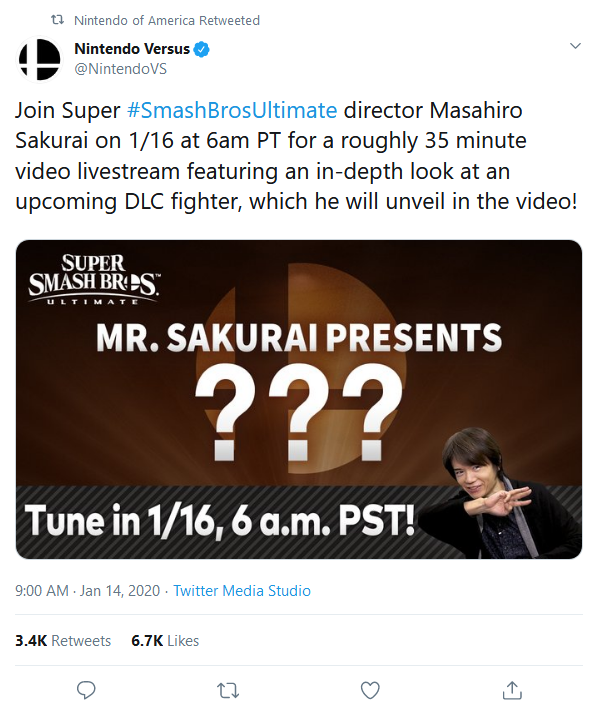 This new fighter will join Piranha Plant, Persona 5’s Joker, the Dragon Quest Hero, Banjo Kazooie, and Fatal Fury’s Terry Bogard as characters who have been added to Super Smash Bros. Ultimate following its release in December of 2018.

As for who this character may end up being, Sakurai has previously stated that Super Smash Bros. will continue to only feature video game characters, even though fans have frequently requested the addition of such others as Goku and Iron Man.

There have been unconfirmed leaks for DLC fighters, which we won’t spoil for you here, and we have also discussed who we believe would be the best additions to the already massive roster of beloved characters.

Super Smash Bros. Ultimate, which recently became the best-selling fighting game ever, will continue to release DLC fighters following the release of this last character of the first Fighters Pass. How many more? That’s anyone’s guess.

Adam Bankhurst is a news writer for IGN who can’t wait and is so excited he just can’t hide it. You can follow him on Twitter @AdamBankhurst and on Twitch.