Impressions And Details From 50 Minutes Of Gameplay

At this year’s Electronic Entertainment Expo, I attended CD Projekt Red’s first live demonstration of Cyberpunk 2077, a project that was announced in 2012, and remained in development until it was officially unveiled at Microsoft’s press conference just a couple of days ago. I entered this demonstration with thoughts of Witcher III: Wild Hunt, thinking I would see something similar in design, only with futuristic trappings in a sprawling city. My memories of Geralt of Rivia and his adventures vanished when CD Projekt Red showed me Cyberpunk 2077 is a first-person, open-world RPG. It’s a completely different beast than Witcher, delivering player choice in a what appears to be a more dangerous and dynamic world.

The demo begins with character creation. That’s right, you’re going to get to design your own cyberpunk. You can select whether you wish to be a male or female, and can design what they look like, right down to giving them scars, tattoos, hair styles, makeup, glow effects, and a lot more. Your character is simply named V, an urban mercenary who takes on jobs that are too dangerous for most people. Who is V? You’re going to get to decide what kind of backstory he or she has by selecting from a variety of options in the backstory creator.

I don’t know how deep this well goes, but all of the choices I quickly spied looked troubling, like being a runaway child. The choices you make are not forgotten, and will directly affect the narrative as it unfolds. Your gender choice will also play a role in shaping the narrative. After determining your character’s life path, you then get to select your position in the world, such as being a Netrunner, Techie, or Solo. CD Projekt Red says you can be a mix of them all if you want, and you aren’t really selecting a defined class in this moment, but more so your weaknesses and strengths, as the game features a fluid class system that allows you to customize it as you go.

In this demo, CD Projekt Red picked a female version of V with stylish long hair that hangs mostly on the left side of her head. We first see her holed up in Night City, somewhere near the beginning of the game, but not right at the start of it. This world is run by mega corporations that control almost every aspect of life. The streets are ruled by organized crime, and survival is difficult if you can’t carve out your own path. V appears to be doing quit well on the survival part, and has partnered with someone named Jackie Welles, an assassin and gun for hire.

V and Jackie are hunting down a missing person, who is believed to be in the hand of a scavengers holed up in a rundown apartment complex, with trash everywhere, holes in the wall, but just enough high-tech wizardry to make it feel like you’re in a science-fiction world. The scavengers hold true to their name and are kidnapping people to strip them of their implants. We don’t see V in this moment, and only see the gun she’s holding – the same viewpoint we see in every first-person shooter. During the demo, a CD Projekt Red employee says this viewpoint was selected to “bring you closer to the action and to maximize your immersion.”

V enters the room and quickly dives behind a waist-high object, but doesn’t remain concealed for long. She takes a huff from a reflex booster, which glows somewhat magically when its inhaled, and opens fire on a number of unsuspecting scavengers. As the bullets fly, V uses the booster to initiate what is effectively bullet time. The world slows down around her for a few seconds, plenty of time to take down her targets. The scavengers in the next room over don’t want to deal with V directly, and shut a metal door that V and Jackie can’t get through. As they look for an alternate path, bullets from the scavenger’s room come flying through the wall. V and Jackie quickly maneuver out of harms way, and use a window to flank to the side of the scavenger that is wielding a huge firearm. V takes him down, and Jackie quips “You won’t need this anymore,” as he grabs the impressive gun.

V works her way into a bathroom to find a disturbing sight: a bathtub filled with water, ice, and two naked human bodies – a male and female. V moves the male body to the side of the tub, and grabs the woman. Her eyes are somewhat rolled back, but she’s still breathing. V pulls her out of the tub, and Jackie says she doesn’t look good. V tells someone over she’s communicating with remotely that she’s going to jack in to see if she can be saved. By jacking into the woman’s neuro socket, V is able to see a variety of data, and is able to call in a medical team. This particular woman is apparently a big deal as the medical team that will assist her is platinum level. After working past a couple of security measures in the woman’s system, V calls in a medical evacuation unit. Before they can move her, the woman flatlines. V uses a “hypo” on her heart to stabilize her. The woman is carried to the balcony outside of the apartment, just a as a flying medical ambulance arrives. CD Project Red says a virus was jamming her locator implant, and V was able to fix it. 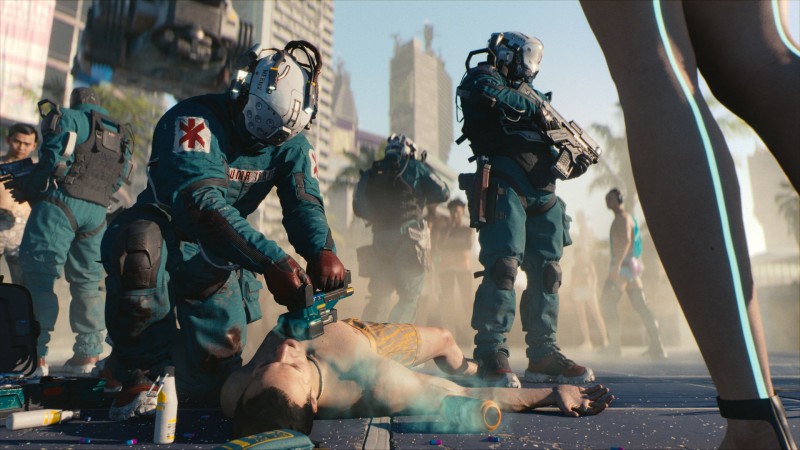 The trauma team is heavily armed, and is a high-end version of insurance for rich people. V asks if they can give her and Jackie a lift, but they don’t respond. We then see V walking through the city, a jaw-dropping moment that is a shows off all different walks of life. People are everyone, and they all look different, some telling stories just from their appearance. If the player focuses on them, V can see their stance in life. Text appears over their head saying things like “junkie” or “bodyguard” along with their level. When you look at Jackie, you see his name and his level, which is eight in this demo. V is currently level one. As V walks past people, I see some of them can be approached, potentially for conversations or missions. None are engaged at this moment.

We then see V in her apartment, which is much nicer than the one the scavengers were holed up in. Opening the blinds on her window, shows a neon-lit view of billboards on old concrete structures, and a window that doubles as a computer, where it appears she can check her mail and more. We see view go into a backroom that doubles as her armory. She grabs her trusty pistol, and then moves to her closet near the front door, which holds her jackets, each giving protections for various things like physical, thermal, EMP, and chemical. The jacket also gives her stret cred, which can elevate her standing in the world.

V’s journey into the city continues, and again, we’re treated to a showcase of sights to soak in, including a box match occurring out in the open between a human with boxing gloves and shorts, and what appears to be a robot or someone who is modded up to the point that they no longer look human. We also see a crime scene that is blocked off with police tape. It appears that the police are putting the crime together using holographic images, similar in a way to Batman’s detective work in the Arkham games.

V enters the backseat of a futuristic car to find a larger man named Dexter Deshawn, who has a golden implants on an arm he lifts to smoke a cigar. Dexter is a fixer and he has a mission for her. V is in the market to make some “eddies,” a form of currency in this world, and is glad to assist. She sits in the backseat with him as he details a potential heist. The player is frequently given input in conversations. The choices you make don’t just alter the flow of the conversation, they can completely change the mission you are about to take on.

We see this first hand in the mission Dexter has assigned us to. He wants to see if V can be trusted and is worthy of working with him. She’s tasked to retrieve a piece of high-combat gear stolen by a gang from a military corporation. This particular quest can be approached from a variety of different angles. V can go in guns blazing and grab the item, or, if the threat appears too great, which is the case here, can just to talk her way through it or use stealth.

V decides to go with the talking approach, and will meet the head of the military corporation under a bridge in a bit. She first visits a ripperdoc to get some upgrades. It appears the player can visit this location freely, as numerous upgrade options appear onscreen. The amount of detail that accompanies this process is stunning, showing V’s arm get numbed with sci-fi needles and shoved into a device that fastens metal and wires to her palm as the doctor communicates with her. The doc then does a procedure on her eye, which is removed and turned off briefly. V has a bit of an out-of-body experience as her eye is moved away from her for a brief time while the upgrade is applied. What exactly did V get put in her eye? An optical scanner that can be used to scan for threats, access points, and more.

(This article is being updated continually throughout the day with new information from the lengthy demo. Check back later for the full piece.)

Source: Game Informer Impressions And Details From 50 Minutes Of Gameplay