Jurassic World Alive has only be available for just over a week, and developer Ludia is already providing significant updates that enhance the game and how we interact with it. With each update I found myself saying “That’s a cool idea. Pokémon Go should steal it.” Both Jurassic World Alive and Pokémon Go still feel half-baked when it comes to the content offered or how far it is stretched. This is more forgiving for a game that is just a week old, but it could also speak to just how challenging it is to create games of this caliber.

Ludia and Niantic (which makes Pokémon Go) are racing into unknown territory with their respective games, but they can both learn from each other.  Having another developer enter the real-world monster-collecting space is a good thing. Competition should lead to the developers trying to outperform each other.

Niantic just started iterating at a faster rate in the last year. Ludia appears to have plenty of content to share right out of the gate. This reminds me a little of Fortnite entering the market and releasing a ton of content as PlayerUnknown’s Battlegrounds stuck to the formula and had to adapt just to keep pace.

So how exactly is Ludia changing the script? Here are things that I love, are currently unique to the game, and are things Niantic could conceivably implement into Pokémon Go: 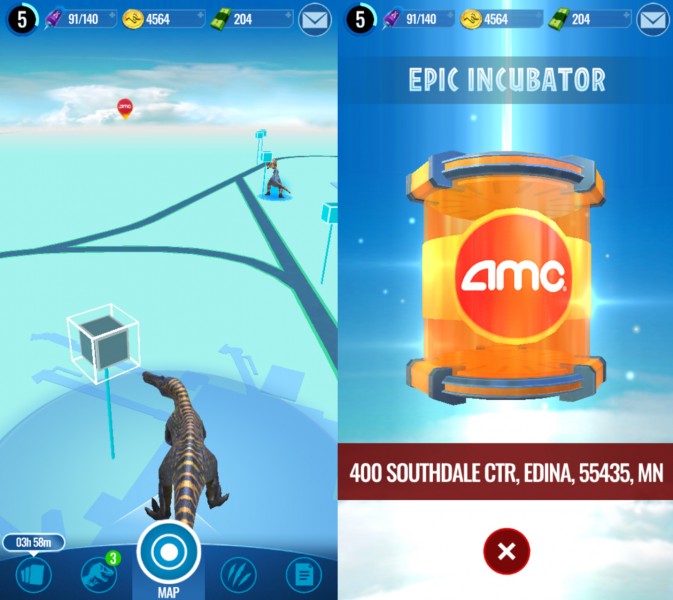 Landmark Locations
Pokémon Go has gyms and stops that give players loot, battle opportunities, and the chance to catch legendary and rare critters, but you need to be near them to see them. In the most recent Jurassic World Alive update, Ludia introduced a partnership with AMC theaters. Players still need to be near the location to secure the prized supply drop, but you can see it in the game from miles away. The AMC logo lords over you like Mount Doom. The reward is good enough that you want to travel to the location to get it.

I’m not crazy about seeing an AMC logo in my dinosaur game, but the idea of seeing something on the horizon is cool and, at least for me, always tempting, as you know it will be worth your time.

I don’t know what this could be in Pokémon Go, but why not make destinations? Maybe it’s a volcano in one part of town that has rare Pokémon spawning around it, or a series of places that must be reached to lead you to an area where you can catch one Shiny Pokémon? It could be anything, but it would be cool to have something big to track over a great distance.

Rarity Levels
When you stand on the field map in Jurassic World Alive, you’ll see dinosaurs all around you. some of them have a blue or gold glow beneath them. Blue shows the dinosaur is a rare breed. Gold signals it’s an epic beast. When you see a gold hue on your map, you’re off to the races. That could be a T-Rex or something you’ve never even heard of.

The one thing that bugs me the most about Pokémon Go (outside of the stability issues) is that Shiny Pokémon are not shown on the field map. You have to engage the Pokémon to see if it is of the Shiny variety or not. At the very least, show me the Shiny version on the field. If Niantic wanted to fully embrace this concept, AND eliminate people’s need to use a third-party app like Poké Genie to gauge the potential of their Pokémon, add rarity levels. Gold means it is between 95 and 100 percent in potential, blue is 94 to 85. I would gladly catch every Pidgey I see if it had a gold hue under it. 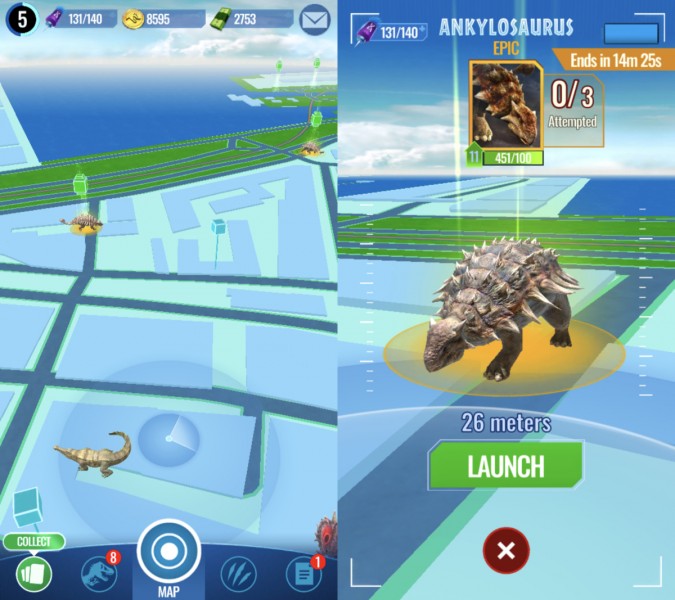 Change the Landscape
Along with the AMC event, Ludia just introduced a week-long “featured dinosaur” event. Each day, a different dinosaur is littered liberally across the field map. The player is given a set number of chances to extra DNA from it. Once all of the attempts are used, you can’t engage with this dino for the remainder of the event. However, whenever you see this particular breed, you’ll also run across a glowing green supply drop above its head. These are new supply drops that are added JUST for this event. That means players have more things to interact with each day, allowing for more loot and money to be obtained.

Pokémon Go is going bonkers with the element-based events right now, but the only thing we’re seeing change is the type of Pokémon that spawn. I’d love to see other things get shaken up, like new gyms added for the element-based raids that happen.

While Jurassic World Alive is already roaring with great ideas in its first week, the core game is still light on content, interactive elements, and doesn’t offer any kind of cooperative experience other than walking with friends. Pokémon Go understands what people want from co-op. Ludia should take a good, hard look at this part of Pokémon Go. Here are three quick things that Pokémon Go does that would greatly enhance Jurassic World Alive.

Reward Walking
Yes, the game wants you to travel to AMC theaters, and that can require plenty of walking. Along the way you’ll come across dinos to mine for DNA and supply drops to gather gear from, but that’s it. Pokémon Go’s egg system is a brilliant way of making people say “Okay, I’ll walk just one more mile to see what hatches.” Guess what? Dinosaurs come from eggs. 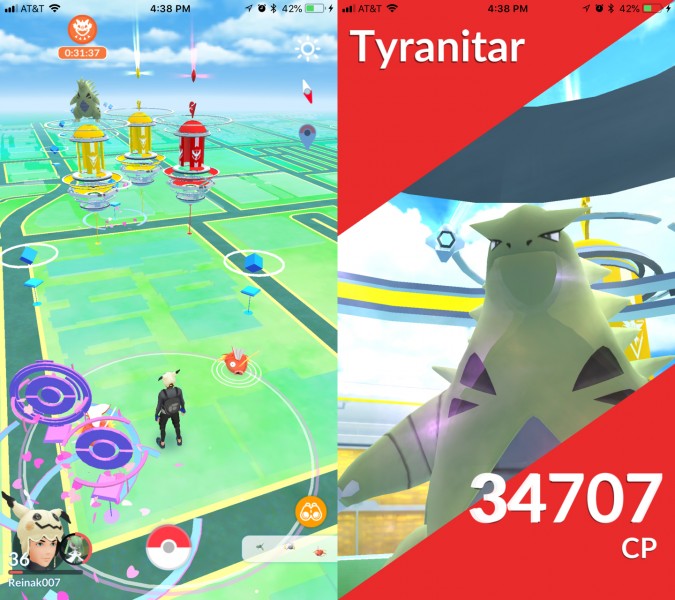 Bring People Together
Jurassic World Alive does have a leg up in offering fun online competitive battles, but doesn’t give friends reasons to play together. Pokémon Go is largely built around the social aspect (even though we’re still waiting on the promised trading and battling). Raids are a great way to bring people together, and it can be fun to meet someone from your same team or gym.

How would co-op work in Jurassic World Alive? I haven’t the faintest idea, but the raid concept could work with new dinosaurs breeds that are introduced to the game, especially the fictional hybrids.

Give Me An Identity
The strangest omission from Jurassic World Alive is the lack of a player avatar. Your location on the map is a glowing arrow, which belongs in Google Maps, not a game. Designing a character is always fun, especially when new clothing is added to the game. Jurassic World Alive’s characters would look fairly ordinary, but a lot of players would rock Ian Malcolm’s sunglasses, and I for one would gladly wear Alan Grant’s hat.

I don’t want Niantic to wholesale copy Jurassic World Alive, and the same goes for Ludia and Pokémon Go. I hope they are looking at the competition’s game, are inspired by these things, and come up with unique concepts that fit their respective games. As I say that, Ludia should totally just copy the egg idea. It’s a perfect fit.