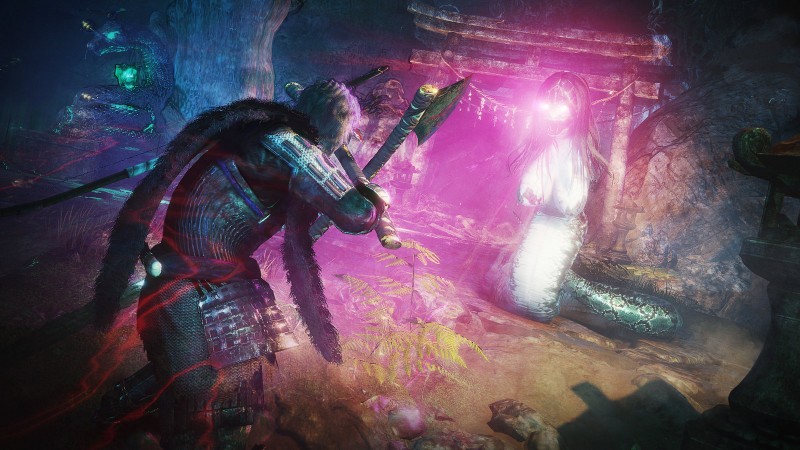 The first Nioh made a big impression on gamers with its cool samurai backdrop and unrelenting difficulty. Nioh 2 isn’t changing up the formula; it stays true to the insurmountable challenge, but it is also leaning more into the yokai (Japanese spirit) elements for more memorable moves to defeat the larger-than-life bosses. While at Tokyo Game Show, I went hands-on with the game and attended a presentation to learn more about it. It quickly became my favorite game of the show.

Producer Fumihiko Yasuda confirmed that Nioh 2 is a prequel taking place slightly before the origInal. Set in the late 1500s, you play as your own customized character who is part yokai. “The big historical storyline is going to be that [Toyotomi] Hideyoshi, one of the greatest Japanese warlords, was actually two people – that includes you and Toukichiro, and you two will be Hideyoshi together and that sort of ties into the core of the story,” Yasuda explains. Toukichiro is another main character in the game, and Yasuda said he was based on a historical figure, connecting the dots Hideyoshi at one point went by a similar name.

Outside of navigating being one half of the man known as Japan’s “second great unifier,” you also are much more than just a samurai fighting evil this time around; you will become a demon by darkness, thanks to your yokai ties. This means you can shift into a yokai form and have special attacks. In fact, any yokai you defeat will drop a soul core, giving you the ability to equip one of their big moves. Yasuda said the goal with the first game was to make a Sengoku death game, this time around the team wanted to make a Sengoku and yokai death game.

Also new to Nioh 2 is a place called the Dark Realm, which is where yokai dwell. At certain points, yokai will drag you down here as the Dark Realm enhances their powers. This brings out some of the tougher enemies but defeating them often rewards you with quality items. In fact, some chests can’t even be opened unless you take them down first.

While there’s no easy mode, there are a few ways to get help. Just like the original, Nioh 2 has co-op, but this time it’s expanding its real-time multiplayer to up to three players. You can also look to “Benevolent Graves.” Once activated, these allow A.I. versions of human players to appear in your game for assistance. If you set one of these graves down, you can also have an A.I. version of your character help out another random player.

This all sounds promising, but then I get to see it firsthand in a hands-on demo. Nioh 2 follows the same philosophy as its predecessor: survey the area and defeat enemies to get better gear so you stand a better chance at whatever big bad is awaiting you at the end. Gear and weapons still show up cosmetically on your character, giving you a new look for every occasion.

After searching around in my demo, I find the dual hatchets, a new weapon in the game, and they quickly become my go-to, as they feel weightless and fast, but can also do a good amount of damage. Plus, some of the combos are just plain cool to see in action. You can also find a new yokai, similar to Kodama, that offers support. In this case, if you find the adorable cat-like creature in a level, it will follow you around and regens your meter to activate yokai moves.

As the demo progresses, I slowly get back in my Nioh groove, defeating harder and harder enemies. Stances are still important, depending on how you want to play: high for offense, mid for defense, and low for dodging, and it still comes down to studying attack patterns and making sure you don’t put yourself in a vulnerable position. Players of the first game know there’s no worse feeling than running out of stamina and sitting there unable to move, seeing the incoming hit and knowing there’s nothing you can do. And sometimes you can do a lot right and still fail, as I see first hand in my first big boss battle against a vicious horse-faced baddie with a big cleaver. His wide swings take up so much space that missing a dodge and getting swept up in a nasty combo is the easiest way to a game-over screen, which happens three more times before the timed demo expires.

And yet, it’s the most fun I’ve had at the show. The adrenaline rush of slowly figuring out how to take down a massive boss that at first just entirely wipes the floor with you is undeniable. Each death gets you a little closer to victory, as you learn the patterns, make better decisions, and ultimately land one of those counters or combos that stun an enemy. Nioh 2 doesn’t reinvent the wheel, but throwing in some cool yokai moves to use against these menacing foes makes the victories all the sweeter.

Source: Game Informer Nioh 2 Is A Prequel And It’s More Of What Fans Want